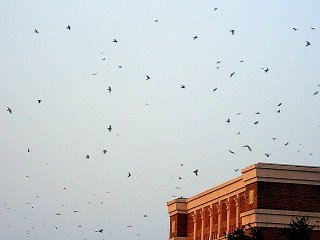 Bernie and I did a little shopping on Saturday, and apparently there was some sort of bird convention or something. I wish blogger would let me post a video, as I got some great film of the birds swooping by, ribbon like, and a constant chirp sound like a weird background soundtrack.

Dallas used to have grackels that would swarm, and make their funny whoop-whoop-HA-ha-hahahah sound. But these Houston birds had a short v shape tail and wings almost like swallows.

They were so flighty I never could get a good look at them. 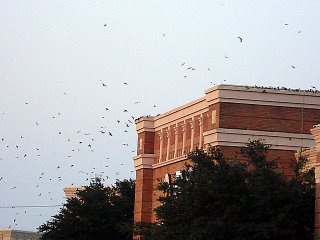 Update: Millinery Guru Kate say they are purple martins. Here's what "All the Birds of North America" had to say: "Their flight is fast and erratic, with rapid shallow wing beats that create a unique twinkling effect. During fall migration flocks can be huge, numbering in the thousands at favored roosting sites. ...glides in circles flapping intermittently. Sings tew, tew rich call, song a liquid gurgling."

Exactly as they were.
Posted by Thoughts on Life and Millinery. at 11:37 PM

If anyone has any questions about birds, Kate has the answer! She has inspired Zoe (my great-granddaughter) to become a bird watcher - binoculars, bird book and all!