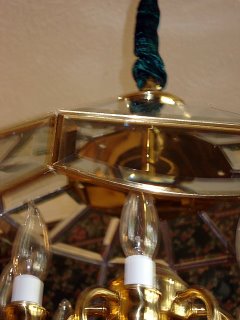 Being a milliner is a lot more fun than being a maid. But it is time to catch up on the usual housework. Our son is coming for the 4th of July weekend, so I thought I'd better get busy and dust the chandeliers.

If you have a son, and you have just read that last sentence without laughing, then your son must be one strange dude. My son wouldn't notice dust on a chandelier unless there was money attached to the dust!

I just happened to look up at my chandelier and was admiring my neatly covered chandelier chain and thought:

"I really should share my money saving decorating tip".

So here it is:

(The need for such a cover was suggested to me by a professional interior designer, whose services I won in a raffle~I'd think twice before trying to win such free consultations in the future...after a designer visits you, you view your whole home with a sense of failure that only remedy is blowing your entire savings account).

Instead, use a roll of wired edged ribbon from your craft stash, and ta-da, by wrapping the ribbon around the chain, you now have clothed the naked. No longer will you avert your eyes from those brazen naked chains when, for a mere dollar or two worth of ribbons by the spool, modesty and cutting edge decore can easily be achieved!

I was feeling a bit blue after dropping B. off at the airport, sort of lonely for some reason. Wished I had some friend nearby to stop and visit. Decided to get breakfast at Taco Bell.

And see the picture...who knew condiments were such interesting conversationalist? As long as I like burrito supremes, I will never be lonely again.
Next time I will be sure to get the Hot and Spicy packets.
I hope they will not be too forward.
Judging from my chandeliers, you should know how modest I am... 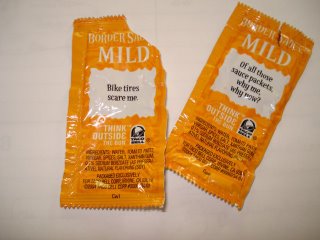 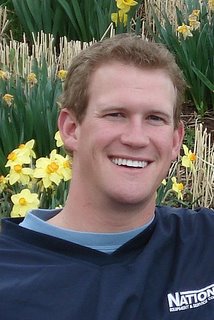 Visiting son Jeff is still single, a fine Christian man, in business in SLC. He has a lovely girlfriend, but if he doesn't get married before he hits thirty I will be auctioning him off on ebay. Four years to go.....

Posted by Anonymous at 9:23 AM