I have learned that if I hear rain and see sunlight at the same time in the afternoon I should grab my camera and step outside immediately. 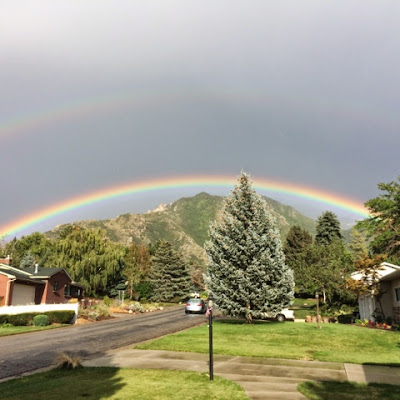 I look to the east and the later it is in the day the lower the rainbow will be.

A double rainbow, with the darker sky between the bows is an extra, extra special treat! 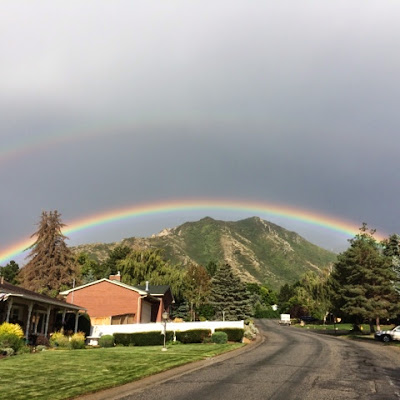 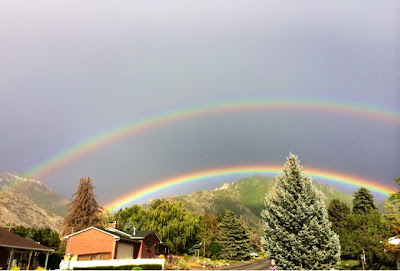 I stood in the middle of the street for this shot; I'd say it was the "best" shot as both bows are complete AND one can see the hillside behind the rainbow end. 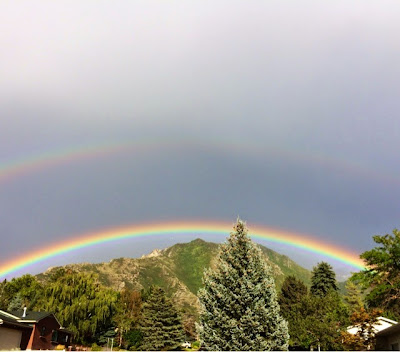 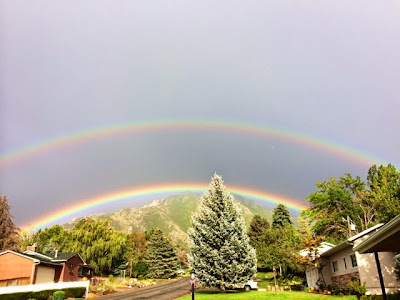 How many rainbow pictures are enough?
I tend to keep clicking until the bow fades away completely.
Maybe this shot was the best one after all? 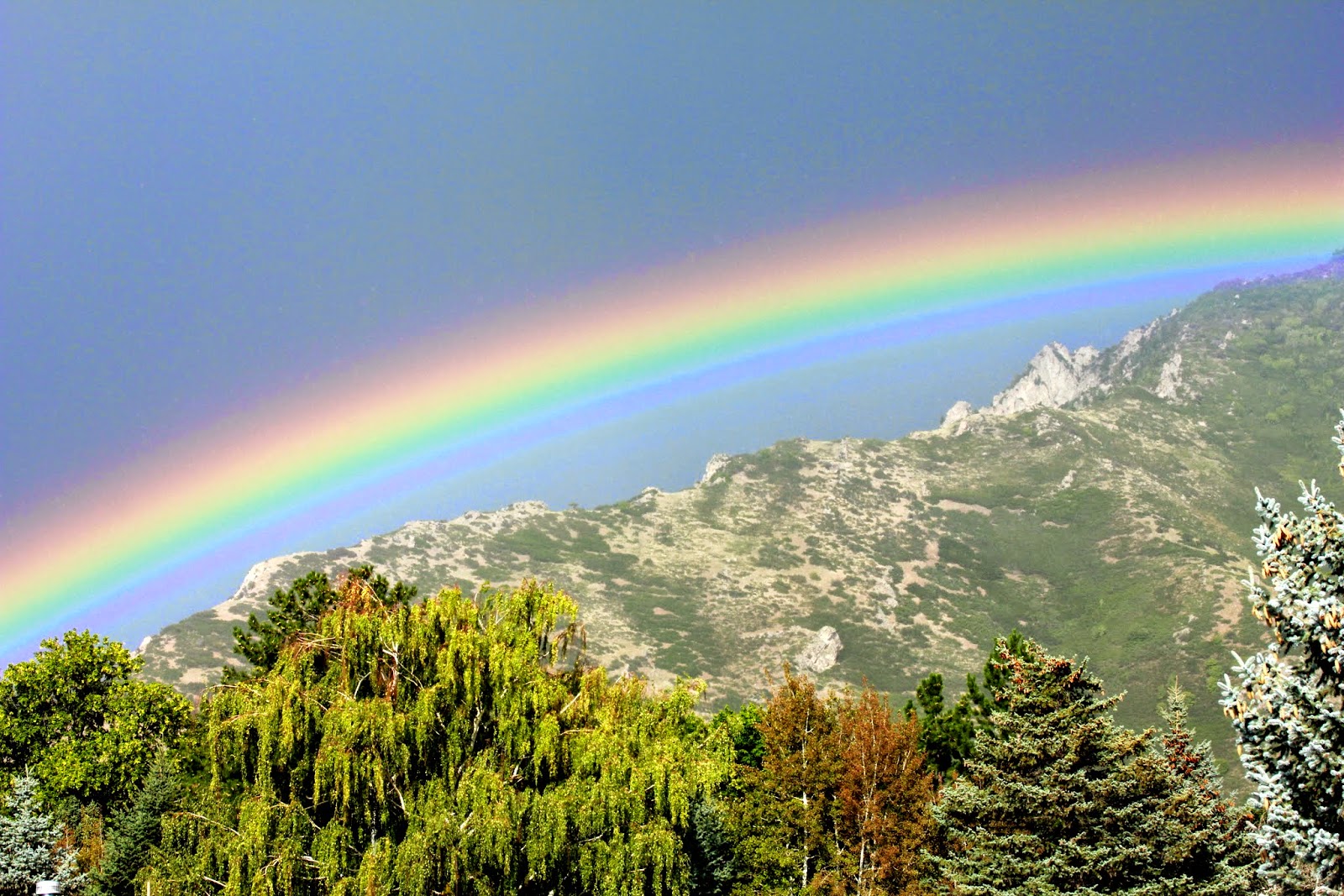 Here's the photos taken with my regular camera.
Yes there is a difference. 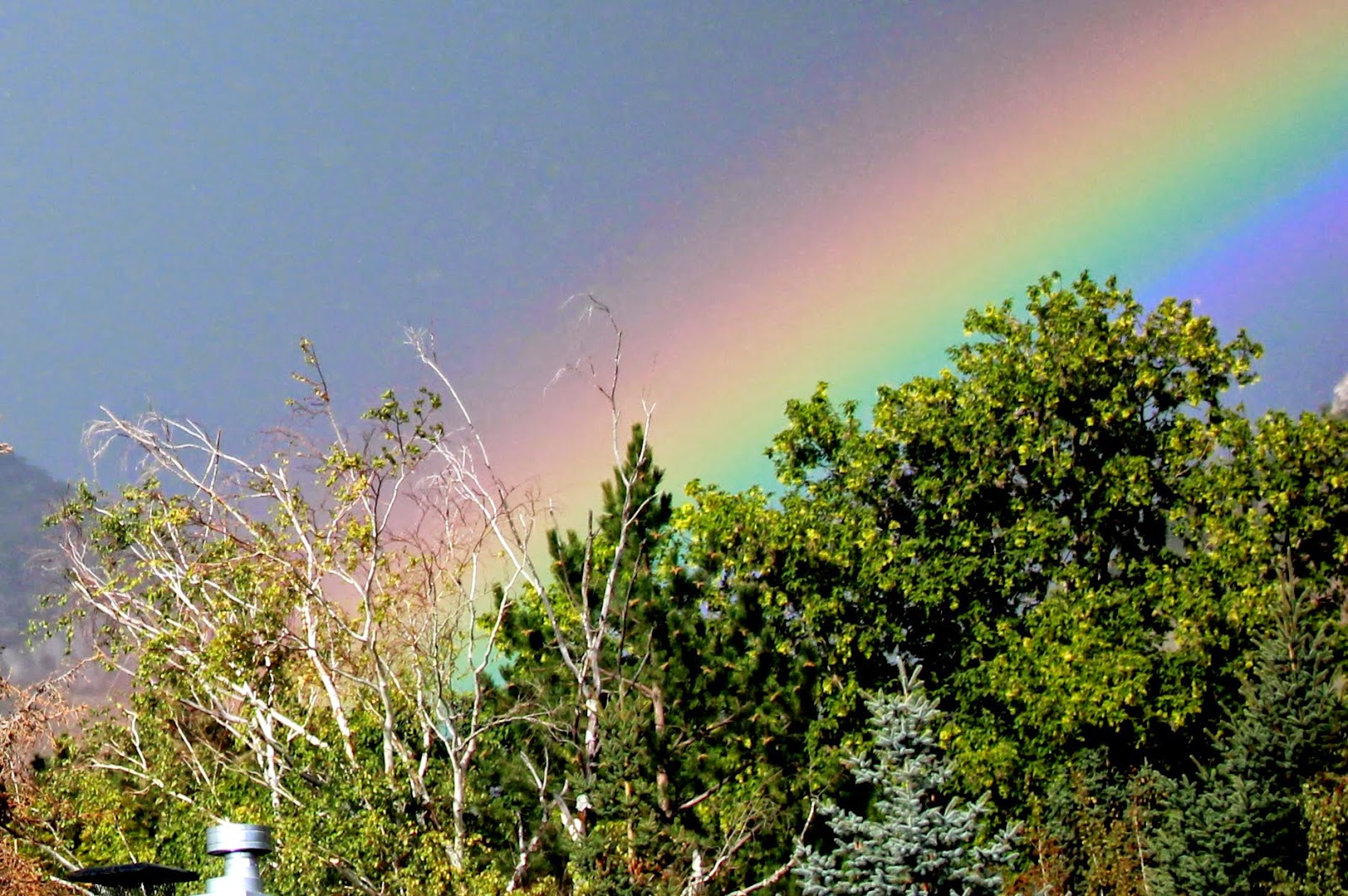 I could capture the rainbow's end exploding in the neighbor's  trees. 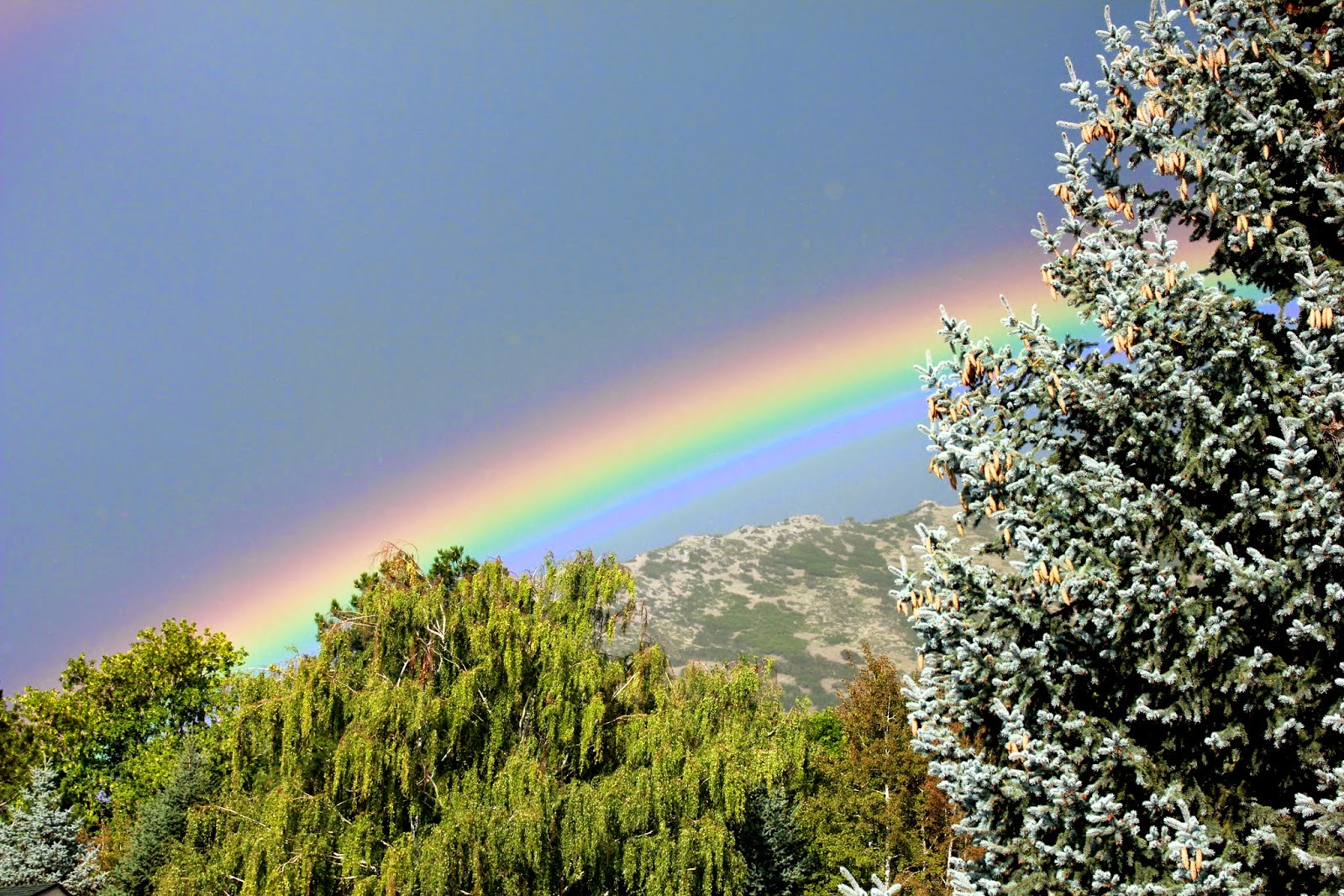 Each color band stands out. 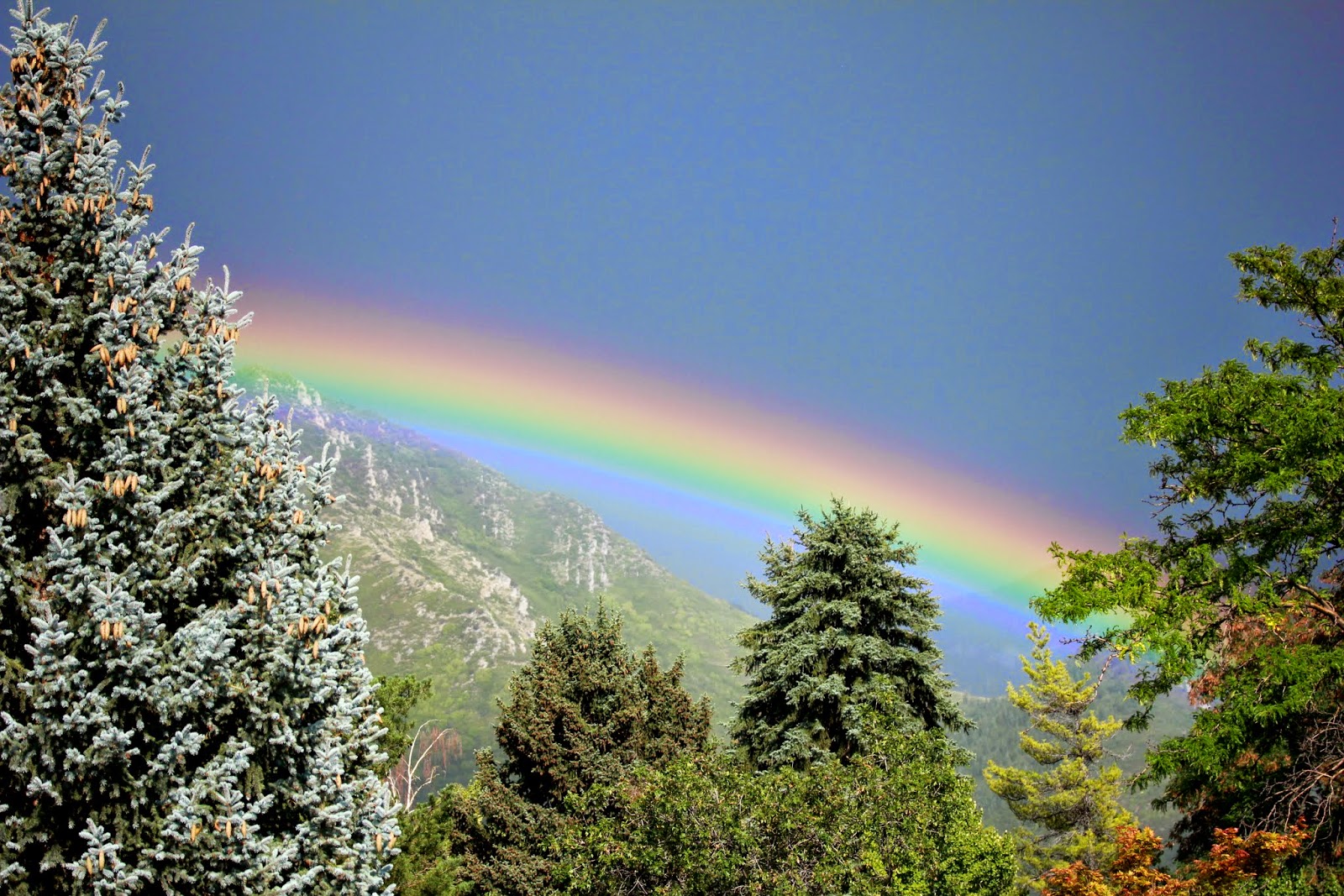 The bow brushed the mountain top. 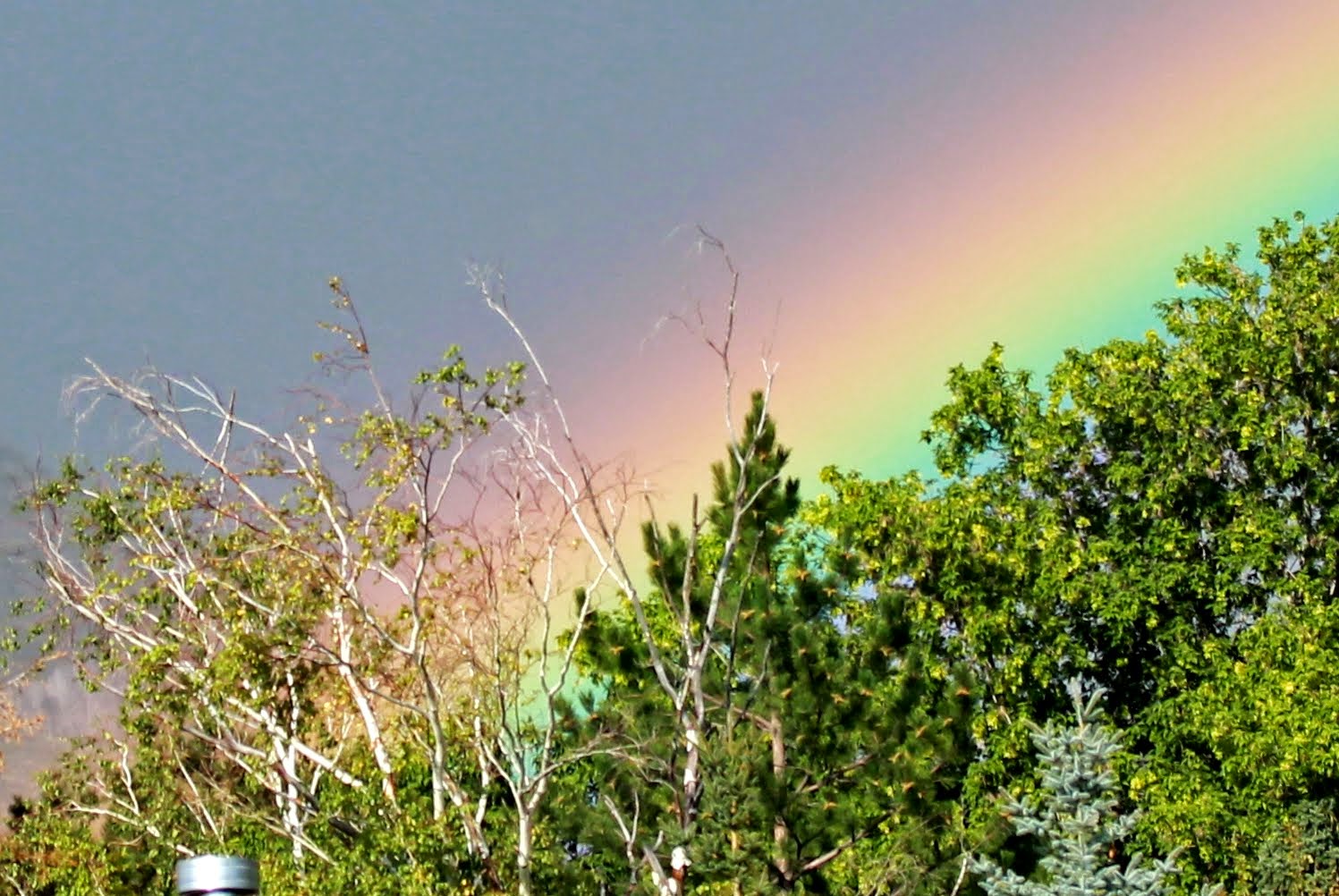 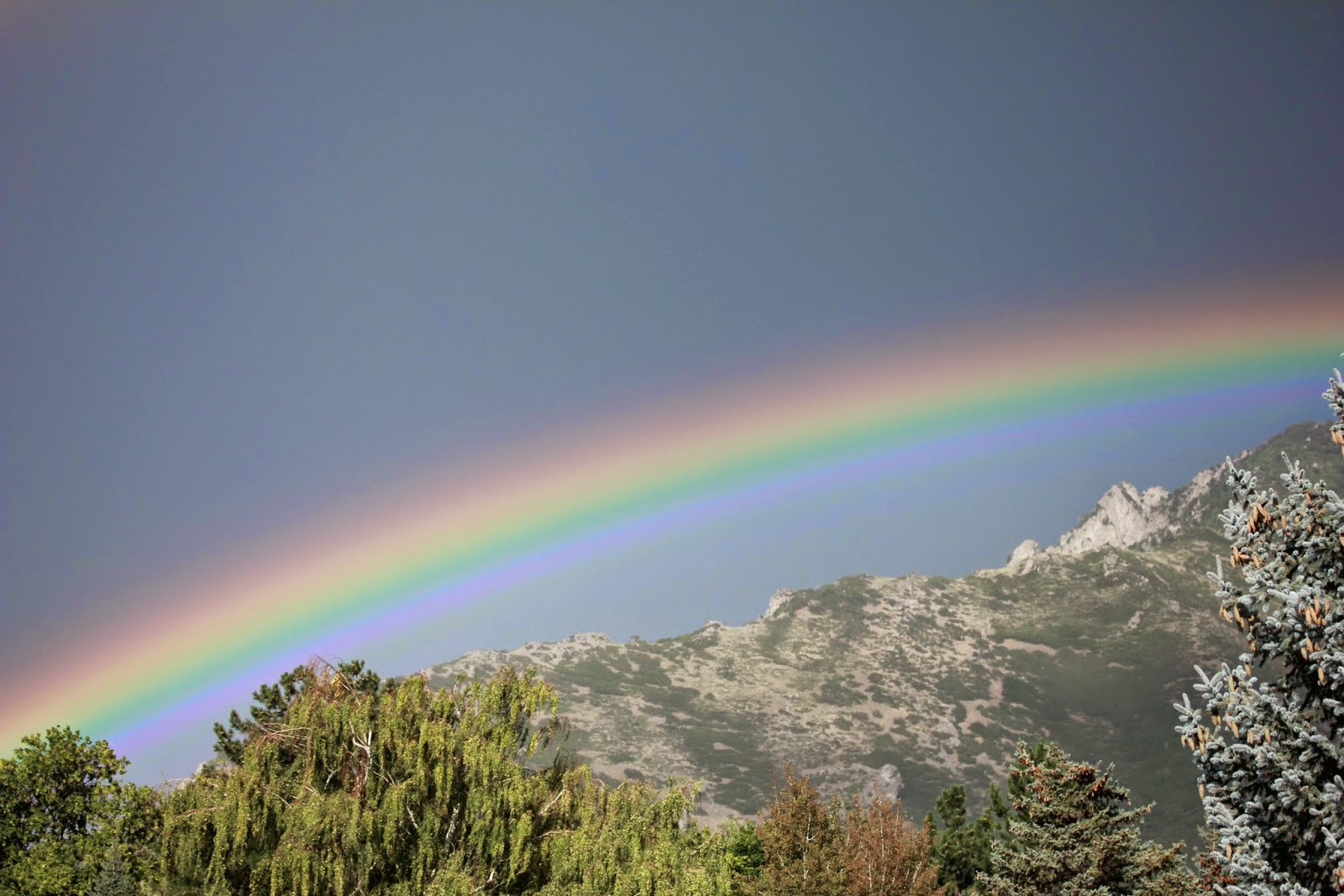 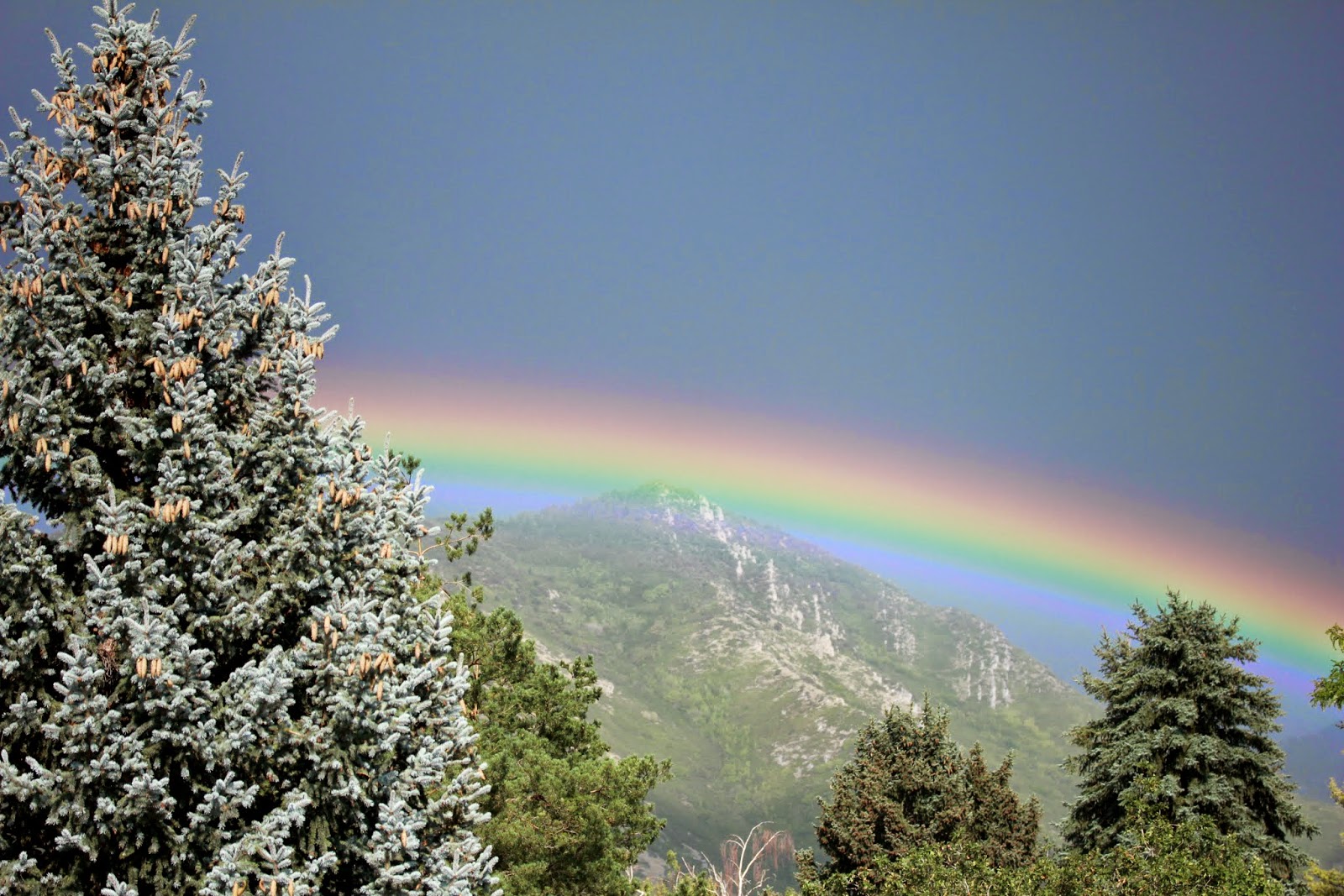 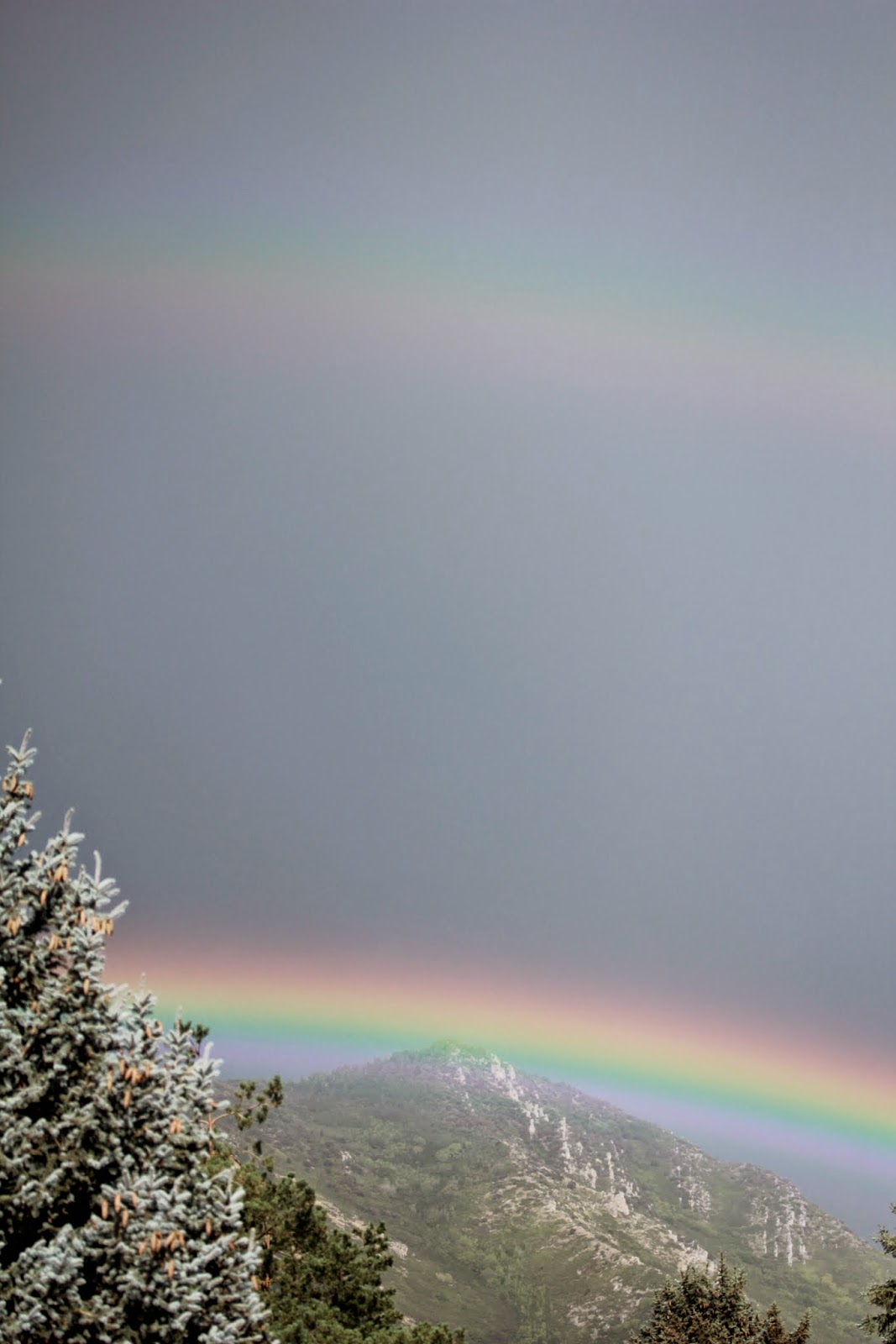 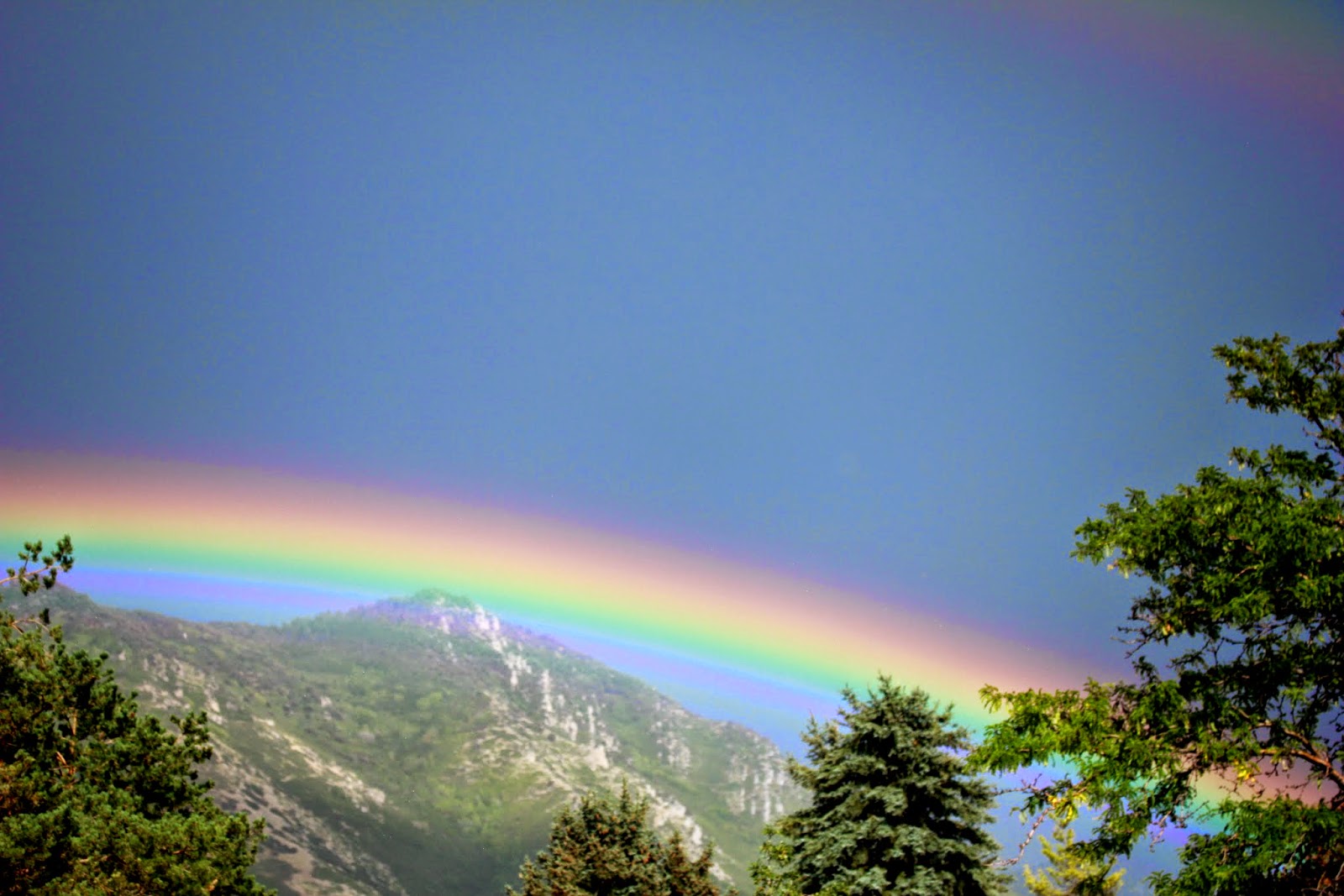 No I  didn't  add color but I did darken the shot slightly. 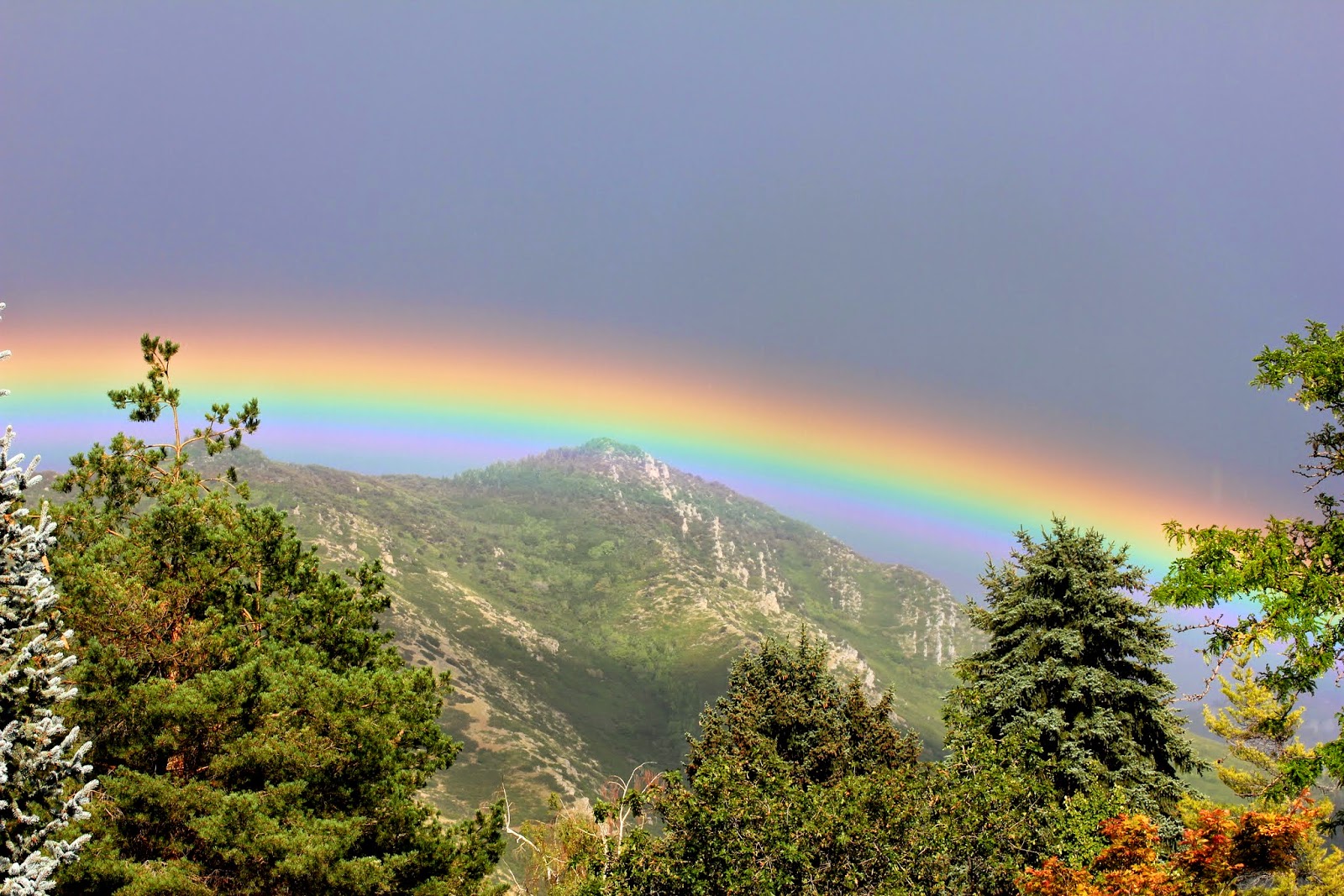 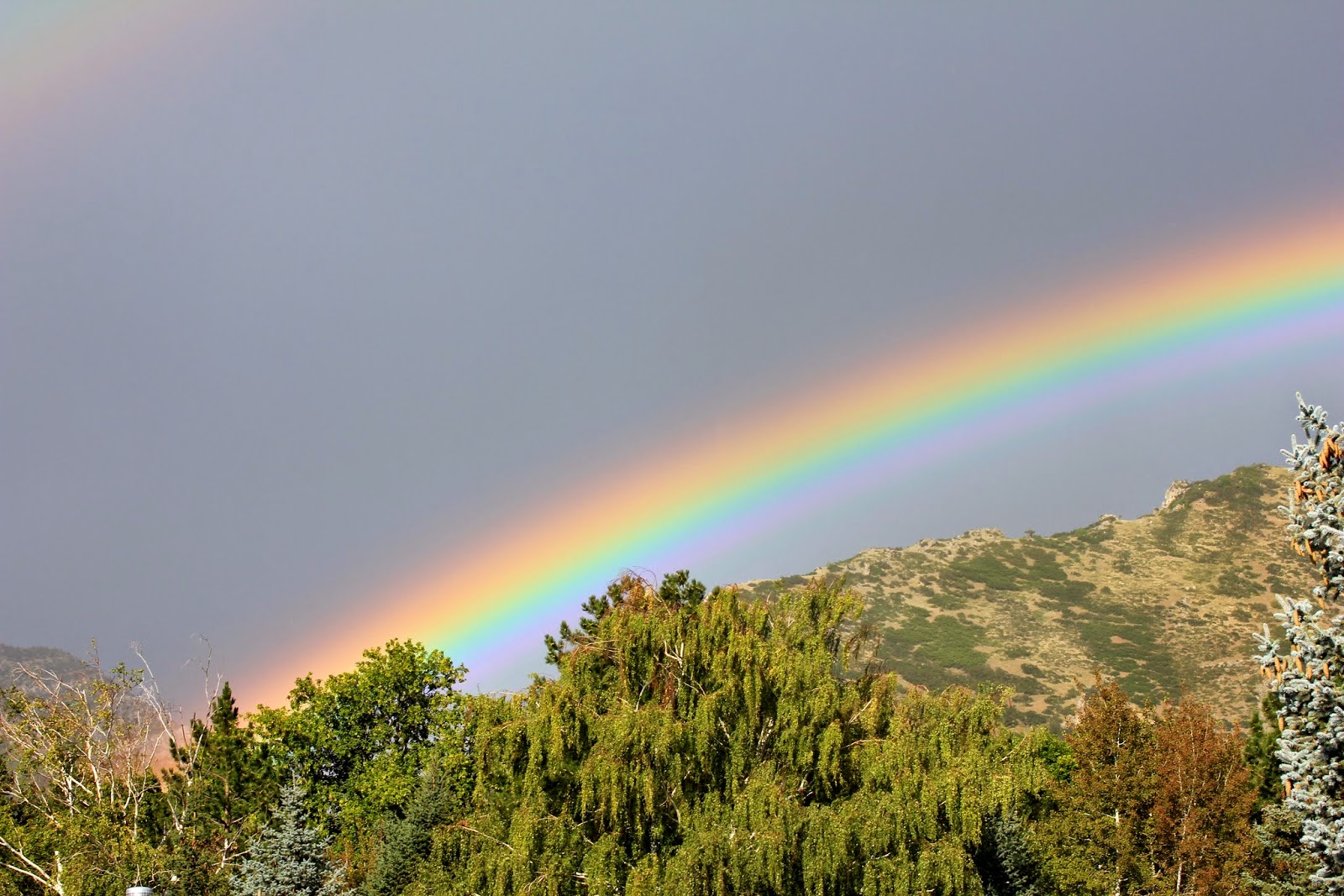 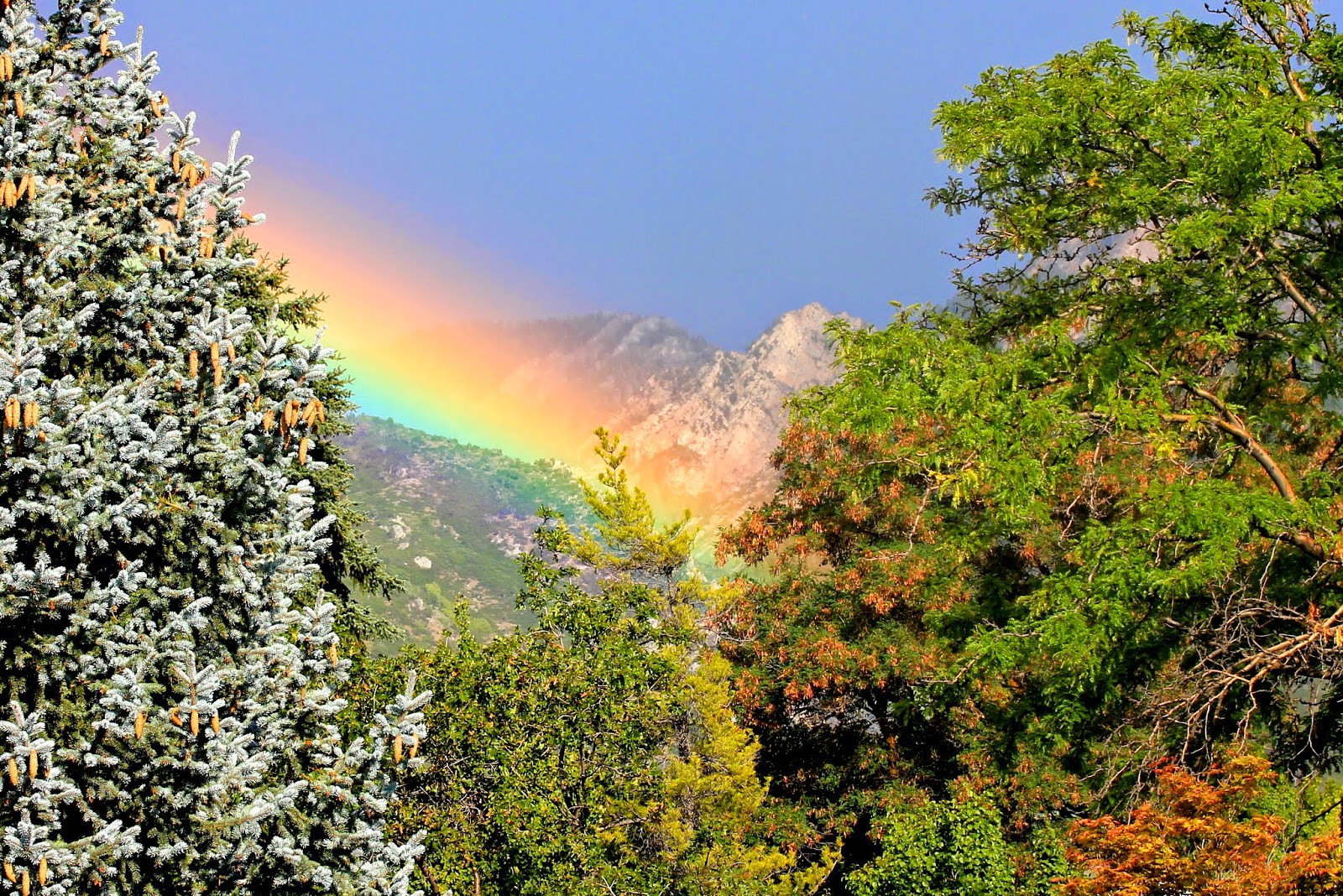 I have never seen a bow so low to the ground before.
The bow was almost flat; I was shooting at 6:40ish pm.
The lower the sun is in the sky, the lower the rainbow sits too.
I wonder just how low a rainbow can go?
Someday I hope to see a rainbow created at the last moments of a sunset.
Posted by Thoughts on Life and Millinery. at 3:35 PM

Wow and wow. Amazing and beautiful!

I have never been able to capture a rainbow...beautiful shots!

Say, it appears that your gmail account has been hacked. I am not opening unless you tell me otherwise. =D

Vee...thanks for the tip! I have changed my passwords. Some jerk in KS hacked it!

WOW - those shots are amazing! I love how the double rainbow is a mirror image of the bottom one.

It is not easy to really capture a rainbow, these are wonderful. And you live in a place where there are likely to be more before too long. The most beautiful rainbow I ever saw was a double one, reflected in the harbor outside our office building in Long Beach, so it was two full circles! I wished I had a camera that day . . . but I did not.

That day, I was on my way to the library and saw the rainbow as I drove along. It was about the brightest one I've ever seen. I parked at Macy's to take some lousy pictures with my lousy cell phone, and was wishing I had my camera with me, and was wishing I were somewhere more picturesque than the parking lot. I'm glad you were there to capture the beautiful sight.