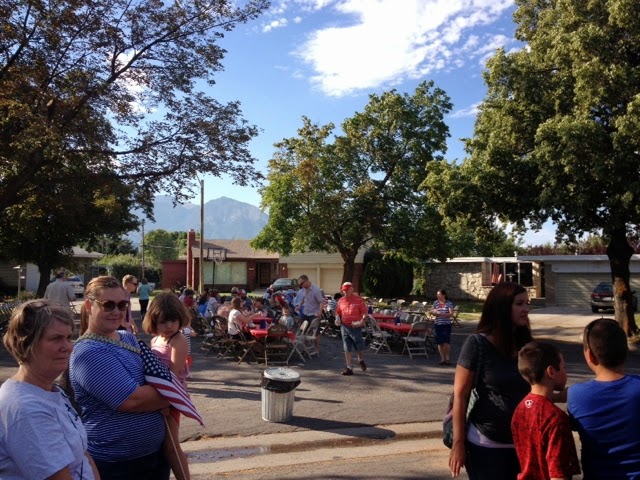 Our son Jeff's neighborhood has the BEST 4th of July block party breakfast and bike parade each year. Tables and chairs are set up in the small cul-de-sac one house down from his house. 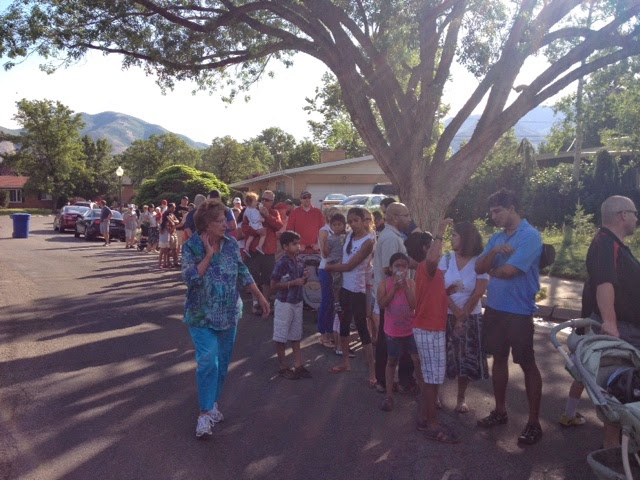 The neighbors line up starting at 8 am and they keep coming until around ten. 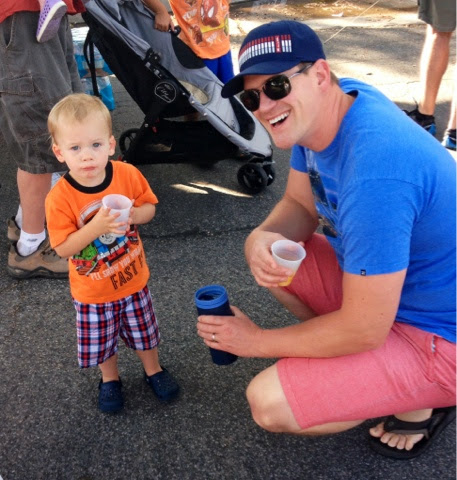 Wearing Red, White and Blue to the party is an unspoken rule.
*Some* folks are not 100% with the program due to alligence to a certain train named Thomas.
A British train no less.
Ahem.
We will discuss this with him much later.
I doubt he will give an inch on the subject though. 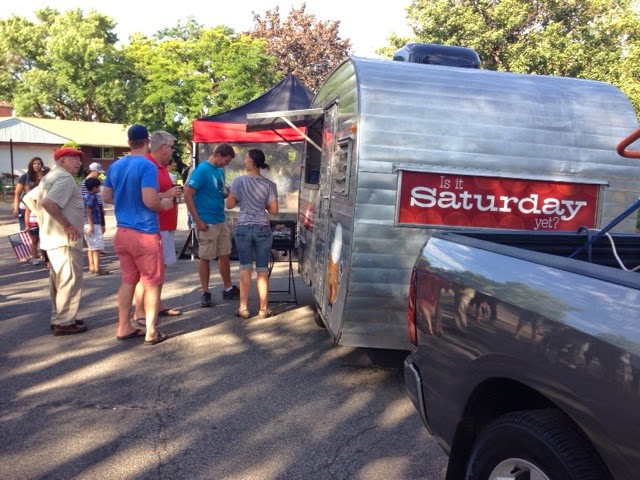 In the past years good hearted neighbor men manned grills and flipped flap jacks for the crowd.  This year the party went upscale.  A mobile food company named Saturday Waffles was hired to cook the grub. 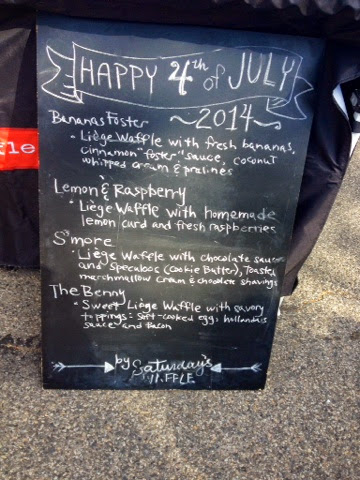 Calling a menu like this "grub" is a bit of a stretch.. 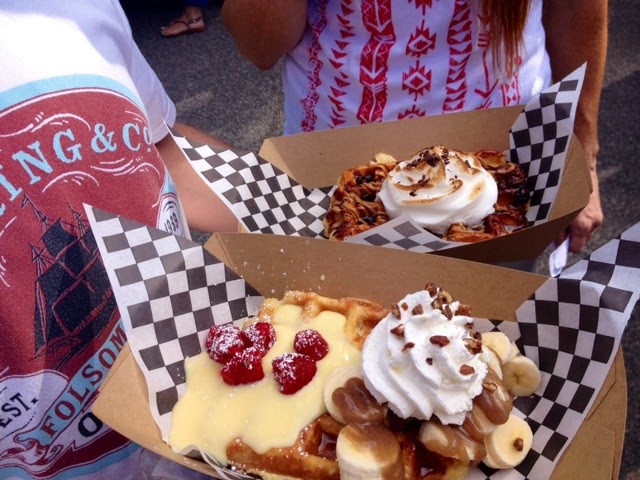 Check out the half lemon/raspberry half Banana Fosters waffle in the front and the S'mores waffle in the back!  We went with the Eggs Benedict waffle that was to die for. 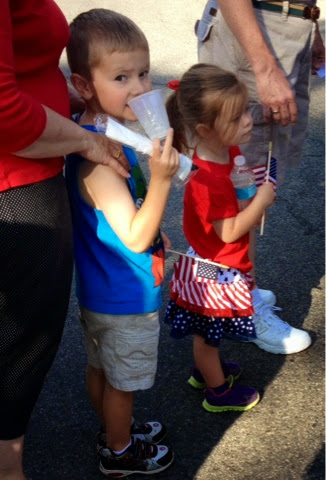 The young attendees were dressed so cute. 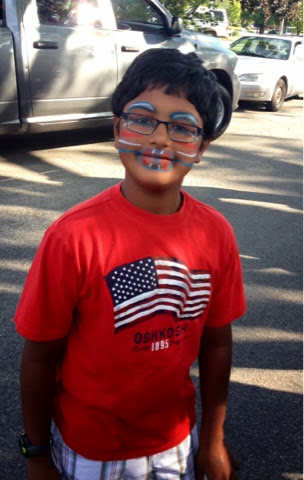 All out patriotic face! 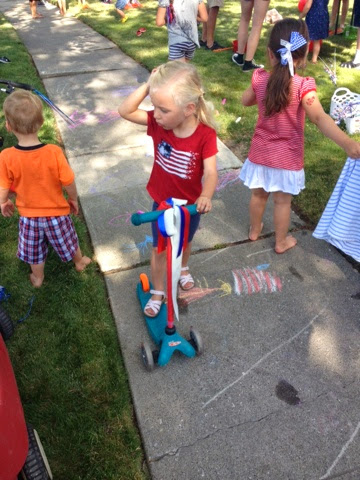 After breakfast there was a bike parade. 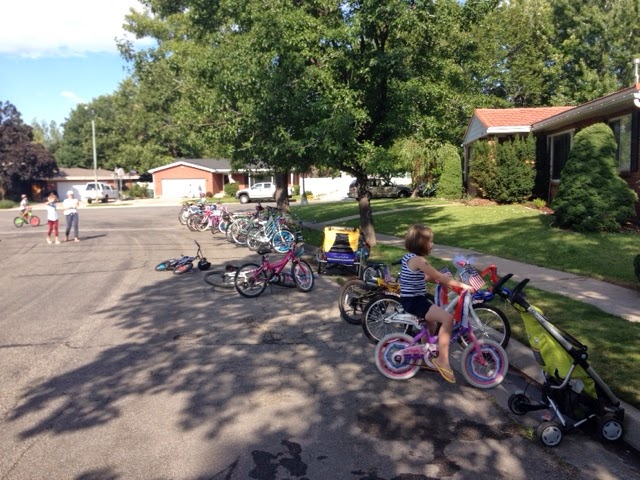 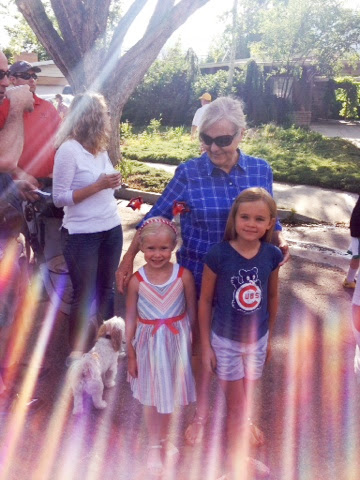 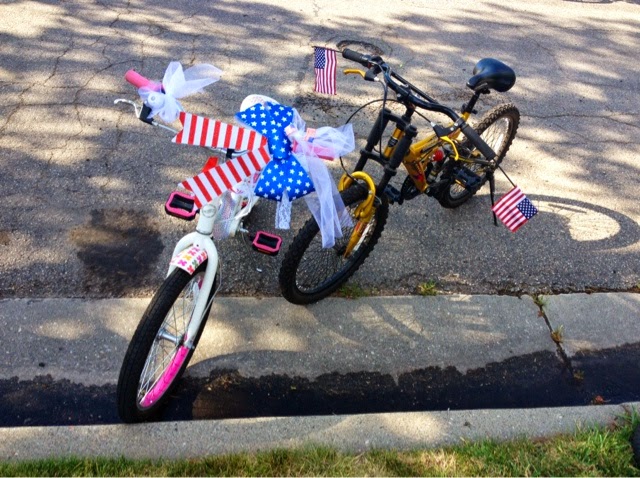 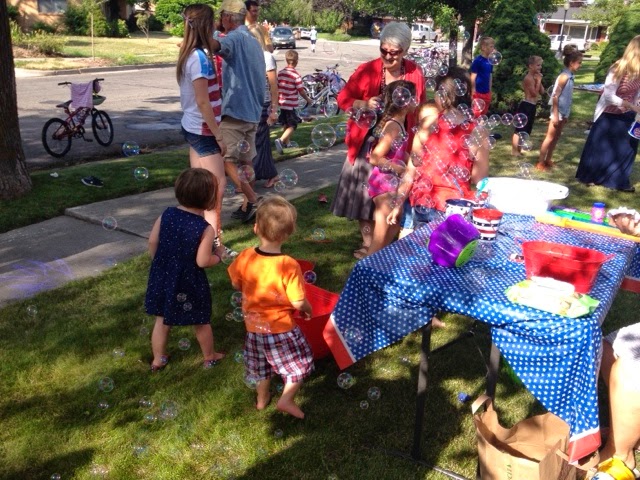 Bubble machines filled the air with bubbles and buckets filled with bubble soap were at the ready for child powered bubble making efforts. Two year old Luke "got" that the bubble wand needed to be pressed against the lips to work. The blowing part was not quite grasped as of yet. 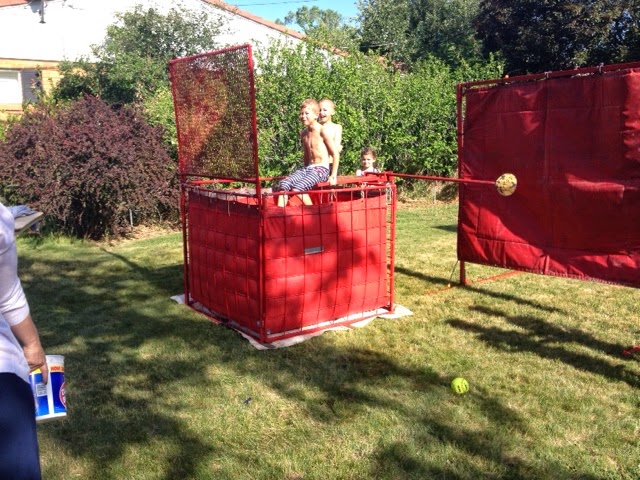 Kids lined up to throw balls and dump siblings and friends into a dunk tank. There was a line up to be a ball tosser and another line to be a dunkee! 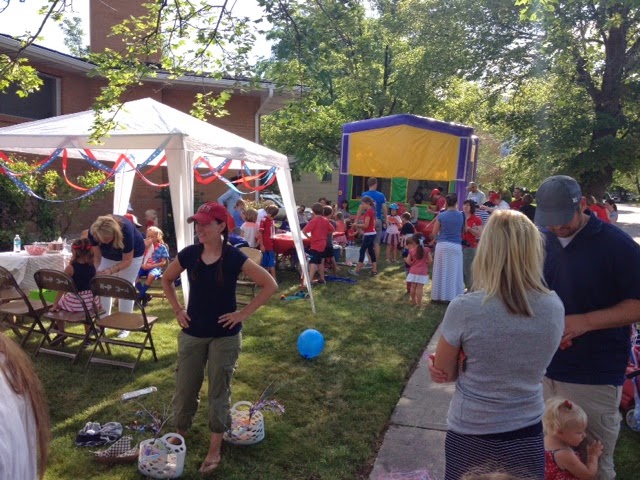 A face painting and temporary tattoo station was set up right next to a bounce house. 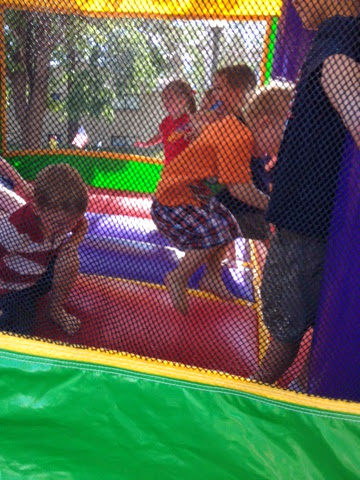 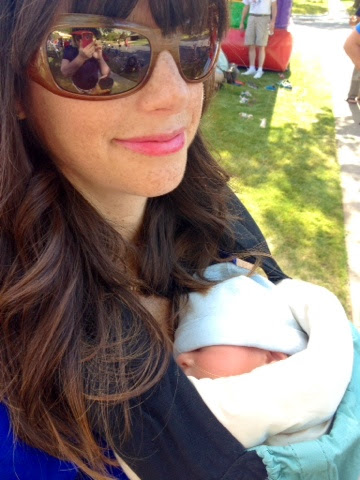 Calvin, The Newest Patriot On The Block snoozed through all the fun. Being just nine days old napping was enough celebration for him.
God willing, next year Luke will be riding in the bike parade and Calvin will be toddling about in a flag colored outfit.
14th Generation Americans they both be.
And me...I will probably be wearing a hat and taking pictures as I enjoy the blessing of the day. 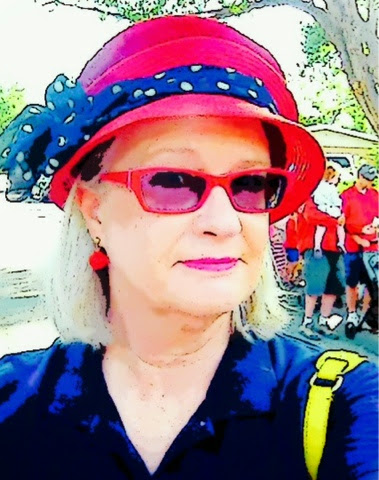 Posted by Thoughts on Life and Millinery. at 12:30 PM

What a great celebration!! The food looks scrumptious. You're making me hungry. And of course I love your hat - both patriotic and stylish :) I remember decorating my bike for "Dominion Day" - now called Canada Day. All red and white of course. Calvin looks very content and Luke looks very handsome in his Thomas tshirt. Josie would approve :)

Neighbors celebrating together is a wonderful way to celebrate! Looks like so much fun. Luke absolutely looks like he knows what he's doing! Look at him bounce!

Happy Fourth to you and yours! Glad the weather is behaving and everyone can have some outdoor fun.

What fun...all around! Glad Arthur never ruined the celebrations in your corner of the country.

Nice photo of the lady with the red, white and blue hat! :)

What a great event! That food looks delicious. I'm so surprised I even noticed the food...

That looks a lot like the Canada Celebrations here - no blue in our mix, but lots of red and white. Like yours, our day was all about having fun with the children - bouncy castles, face painting, obstacle courses etc. I have been preoccupied and not around much, so missed the news about your sweet, wee Calvin! Congratulations!

Fourteen generations! I can't imagine that. I enjoyed reading your long list of descendants on your Facebook page again. What a rich heritage you have.

I love that block party. It is so impressive and those waffles look just delicious.

Wonderful to see Rachel and Calvin too.. so beautiful.