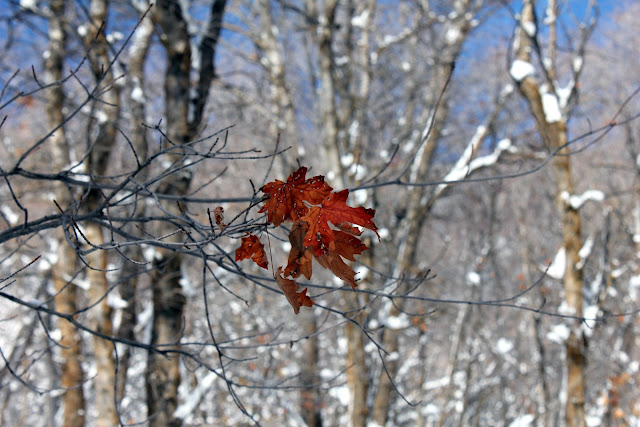 In some instance the two try to split the difference with scenes like this one.
(Looks like Winter is coming out ahead on this particular compromise). 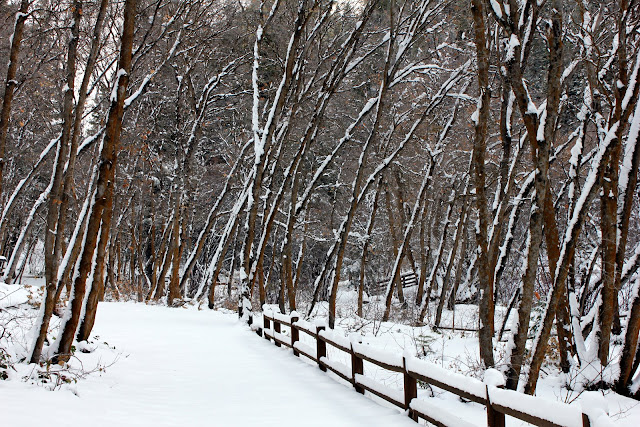 All last week the weather forecasters were giving me the willies by repeatedly warning us that there would be a sever winter storm, commencing at commute time on Friday.

I was out of my office at 4:30 sharp and the first flakes fell at 6 pm at our house. 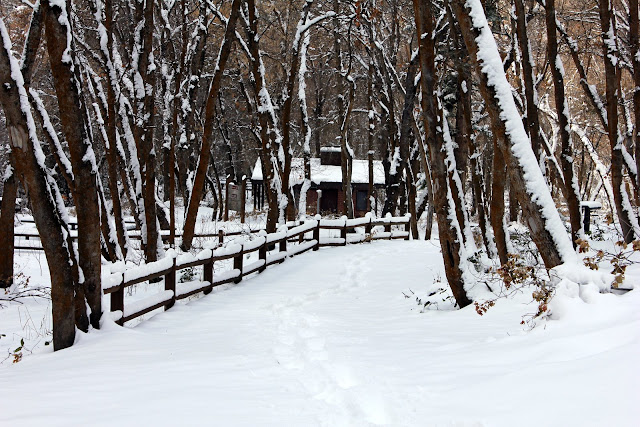 The snow fell steadily for about three hours, then just dropped a flake or two during the night and into the next morning. I was sort of disappointed as I like to watch snowfall and there isn't much to see once it gets dark outside.

By Saturday afternoon, we had scheduled a massage and decided to go snowshoeing before that special treat. 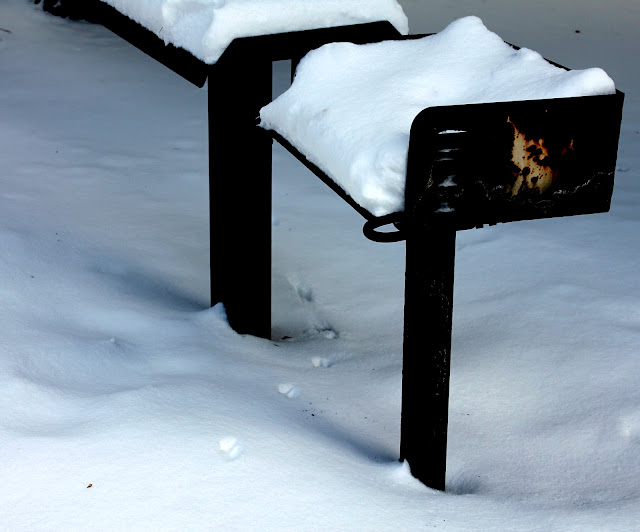 No human footprints were to be seen up in the canyon, but oh, there had been lots of other kinds of foot traffic. 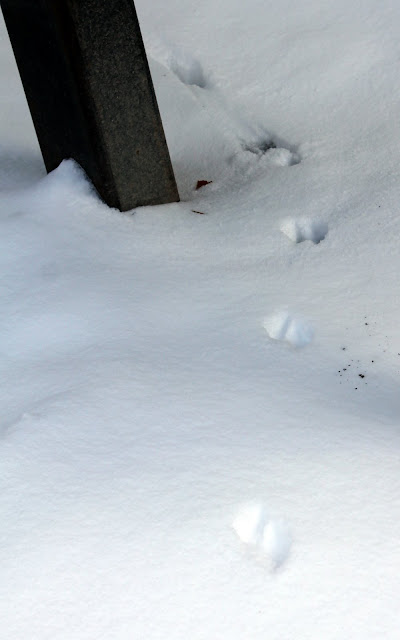 The temptation to follow the track...to see where the critter was heading...well, why not give into the particular harmless interest? 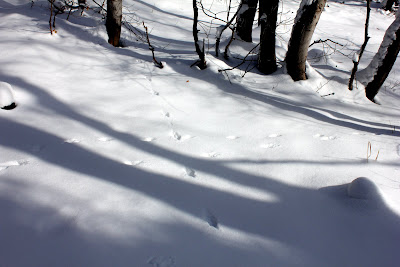 Was there a critter "t-bone" incident, with animal driven tow trucks involved? 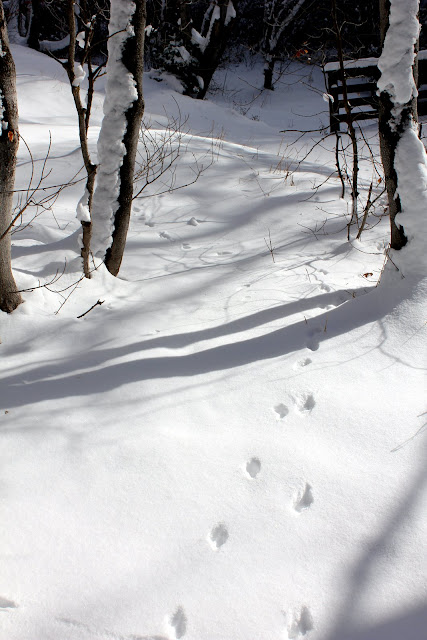 Looks like there was a successful lane merge accomplished here... 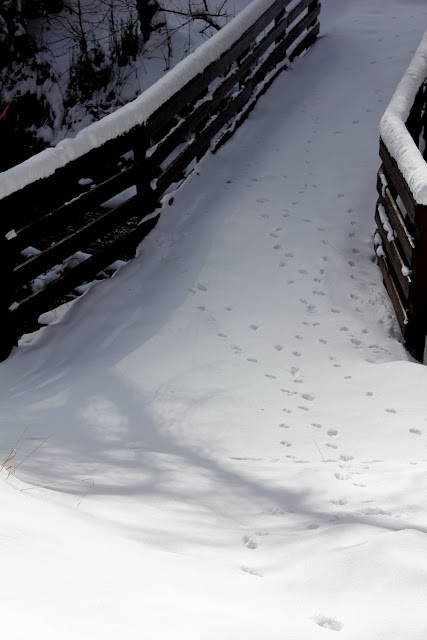 Then traffic got really heavy at the bridge crossing. 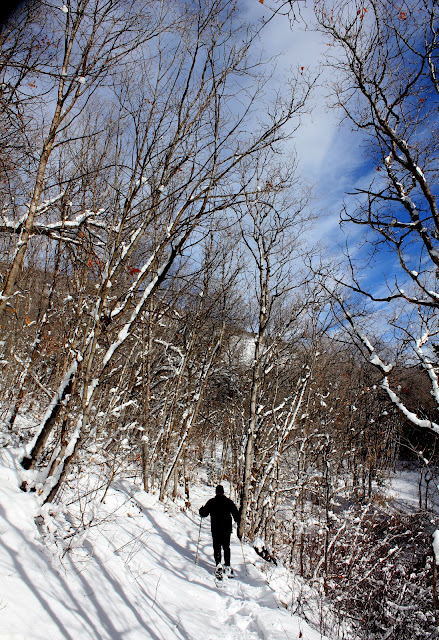 Other critter tracks were much more straightforward and easily understood. 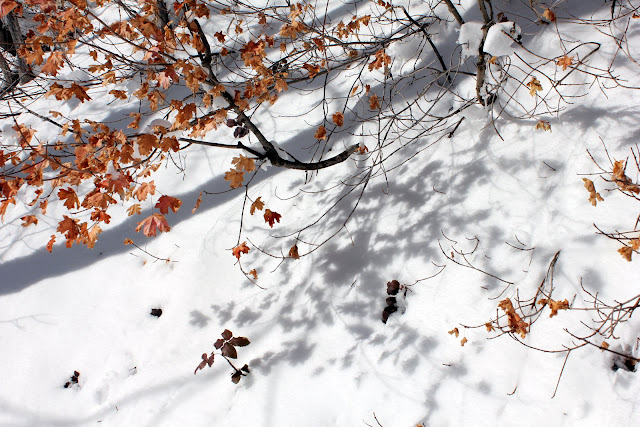 It was a super nice time to be out in the snow... 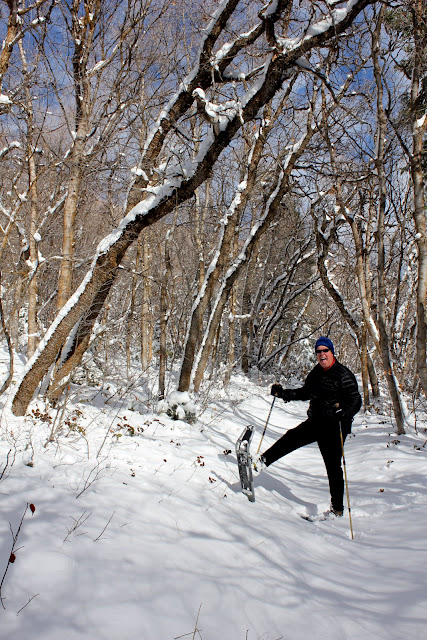 For creatures of every size!
Posted by Thoughts on Life and Millinery. at 6:58 AM

So glad you enjoy the snow so much! It really is beautiful and how fun to be the first humans out in it...

Oh such beautiful photos Jill. I could select anyone of them to use on my blog. ..but alas it is your neck of the woods. .and not mine.

Oh, it's so pretty! I've never been snow-shoeing, but I'll bet it's fun (and a great workout)!

Bernie looks as if he's enjoying himself!

We are being promised such a snowstorm overnight. I hope that it comes to naught.

What a good idea to do something energetic before a massage. Was it great? I hope so!

Those red leaves and that white snow...scrumptious photography and fabulous subject matter.