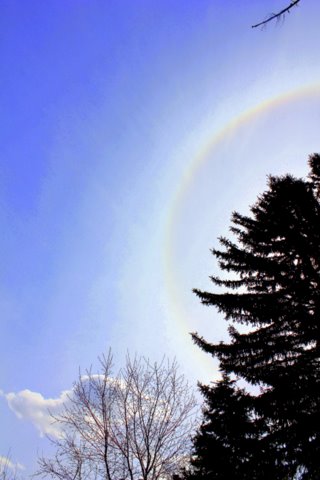 Just look around...and up...and see what you see.
That was good advice this morning; a sky phenomena called a 22-degree halo was just to the north of us over head. 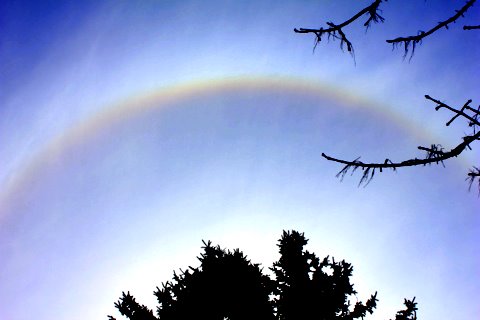 So beautiful!
I have rarely seen such a thing, and yet my Weather Identification Handbook (by  Storm Dunlop, and no I am not making that name up!)  tells me that they are extremely common, and can be seen one out of every three days in Western  Europe and the British Isles.
The book had no notation about the frequency of such things in my neck of the woods.  I would be tempted to say they must not be that common around here or else I surely would have noticed them before. 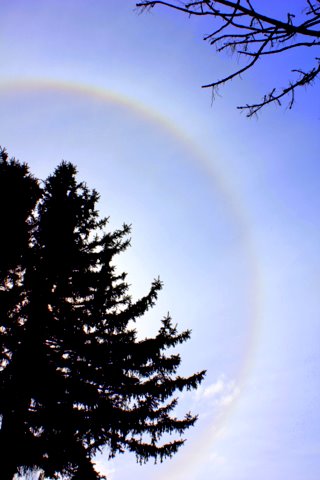 Now granted the 22-degree halo phenomena is not as bold as rainy day rainbow, and it is a bit hazy, plus because it encircles the sun it does require looking pretty close to the sun itself, and most of us avoid doing that when we can.
I have seen many 22-degree halos around the moon though.
Probably because staring at the moon isn't quite so hard on my eyes. 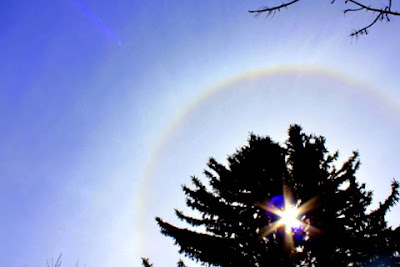 So what exactly is going on with these pastel colored halos?
According to the book:
"The presence of ice cystals in the atmosphere produces a whole range of optical effects.  Because the crystals may refract the light, dispersing it into a spectrum, or simply reflect it, some of the effects are strongly colored, while others are colorless (i.e., white).  The position of these circles, arcs, and spots of light are strictly governed by the shapes that the ice crystals may assume." 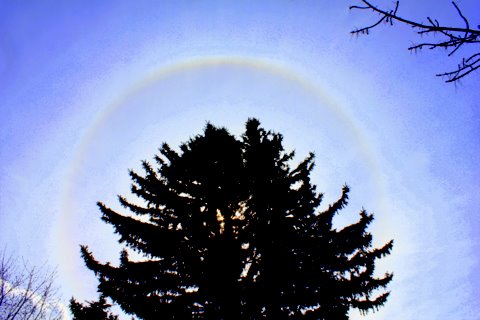 "Halos are circular arcs around the Sun (or Moon).  They occur whenever there is a thin veil of cirrostratus, and this often precedes a warm front.  But under such conditions, the sky remains bright and the majority of people do not even realize that clouds are beginning to cover the sky. 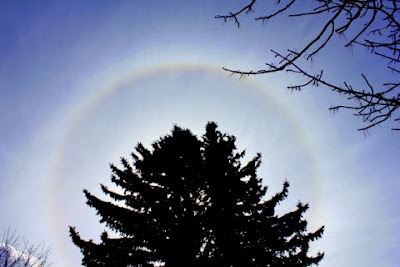 "In temperate regions there tends to be more reports of  'rings around the Sun' in summer, when sun-bathers feel that the warmth of the Sun has started to decline, hold up their hands to block the sunlight and see a halo for the first time in their lives.  Yet haloes occur throughout the year and are particular common in the polar regions, and in the winter in continental regions, where the cold conditions often produce diamond dust, tiny ice crystals that float in the air and create brilliant haloes." 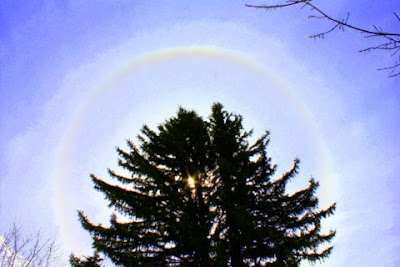 "The most frequent halo is a circle around the Sun or Moon, with a radius of 22-degrees (a hand span at arm's length).  It is produced when light passes through two (non-adjacent) faces of a hexagonal ice crystal, with an included angle of 60 degrees.
(ouch, geometry...I never did very well in geometry...)
These crystals normally have a completely random orientations so that the light is spread in every direction and thus appears as a circle at a fixed distance from the Sun.  Because of the variation in the amount and nature of the cloud that is present, the circle is often incomplete, or varies in strength. 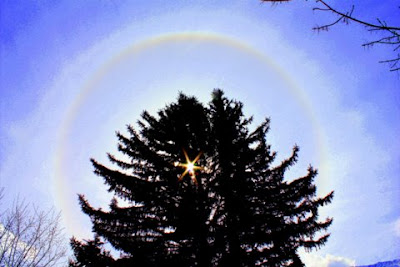 "When faint, this ring appears white, but when stronger, the inner edge is red, surrounded by a yellow tint. On rare occasions a blue-violet color has been reported on the outside. "

(THIS IS WHERE IT GETS REALLY INTERESTING TO ME)...

"This sequence of colors is exactly the opposite of that seen in a primary rainbow, but is hardly necessary as a means of identification, because a halo lies on the same side of the sky as the Sun, whereas a rainbow always appears around the anti-solar point."

"The sky inside the halo is darker than that outside."  (That was what first caught my attention actually...it almost looked like part of the sky was smoky.)

"The reason...is that light from that portion of the sky is diverted away from the observer."

"A second halo, with a radius of 46-degrees may sometimes be seen.  This occupies such a large area of sky that it is rare to see a complete circle.  It is much fainter than the 22-degree halo, which is undoubtedly another reason why it is less often reported.  It is produced when light passes through the end face and one side of a crystal where the included angle is 90 degrees."

While I am generally curious about the names of things seen in nature, I tend not to care too much about the science behind how natural sights come about.  This semi-scientific explanation caught my interest because it pointed out several details that I had missed: the reverse color sequence, the fact that it occurs with the sun while the rainbow occurs in the sky away from the sun, that there is a second halo to look for and most importantly, is that this beautiful sky decoration is made possible via ice crystals that have a specific design and yet are dust particle sized.

God certainly didn't have to design all those elements just so, for something to happen that (near as I can tell at least) serves no particular purpose except to be pretty for us humans to see, when we happen to be outside, and happen to look up into the sky at just the right time.

Makes me wonder how many of His spangling and bejeweling I have missed in my life.
Makes me glad He allows me to have sight to see such things, and a camera to document it, and a place to share it with others too.

(If you would like to see the eight pictures of the 22-degree haloes in a full screen sized slideshow, click HERE.)
Posted by Thoughts on Life and Millinery. at 3:33 PM

Oh, cool! I don't think I've ever seen one around the sun before!

Thanks for the science lesson, too!

Fascinating! I've seen a moon halo many times, but never a sun halo. Thank you for all the researched information too.

And...I love your new header and your blog colors.

This is just so amazing...you're a good one for sharing the amazing. I have never seen such a thing except around the moon. Loved all the interesting scientific facts and the comparisons to a rainbow. I agree with you, God just loves to razzle-dazzle us.

I don't understand all of it but I do know it's very cool and a wonderful thing to see.

I have often seen halos around the moon but never around the sun. Your pictures of the halo are stunning. I can't help but smile to think God arranged you to be available to see the halo he made.

Hey, Jill...I had to pop back in again this morning to wish you a glorious birthday! May you be blessed, as you bless those around you! Hugs!

Cool! And I can always learn something over here. Thanks for passing along your 'learnings'.

Happy Birthday!
Wonderful pictures! I've never seen such a sight!
Thinking of you and hope your day is filled with beauty and joy. Of course, we hope you have lots of love and fun too. Love you, mom and dad S.