Soldier Hollow on a Saturday afternoon 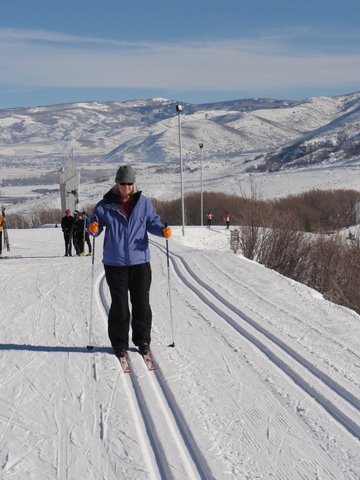 Another try at cross country skiing.
The slope was fast and steep just beyond this scene. I was scared but hung in there skiing along until I ran out of track.
At that point I fell with my right arm up, landing such that I tweaked my shoulder.
It took a bit to pull myself together; once I stopped shaking I unclipped my skis and walked back to the car, where I called Gail.
She gave me permission to NEVER get up on any form of skis ever again if I don't want to.
I. Don't. Want. To. Ski.  Ever. Again.
Bernie kept skiing...and about 40 minutes later he came back to the car to announce that he had fallen also and bruised his tail bone.
He intends to continue to ski, in fact, he had just bought himself the skis he was using this trip after renting and trying out several models before he made the decision about what brand he wanted.
I was hoping he would want to buy snowshoes instead of cross country skis...I love to snow shoe, but I guess I will be doing my outdoor activities and he will be doing his, and who ever is least hurt will be able take care of the other.
(I have a sneaking suspicion that I should acquire a nursing uniform. Jus' sayin' is all.) 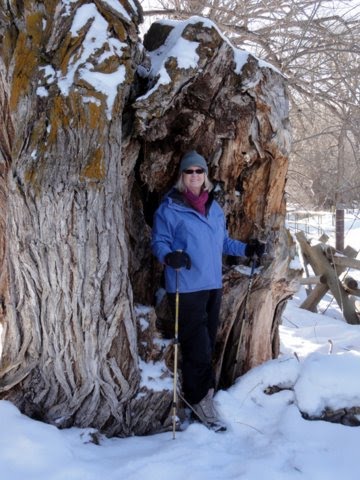 After we turned in my skis and gear, we enjoyed a bowl of a wonderful Autumn Beer Pork Stew.  There is just something about eating a hot stew outside when there is snow on the ground that even the best restaurant can not duplicate.
Then I asked if we could just hike a bit.
(I had taken a Tylenol with codeine and was feeling pretty good at that point.)
This enormous hallowed tree was at the beginning of the trail. 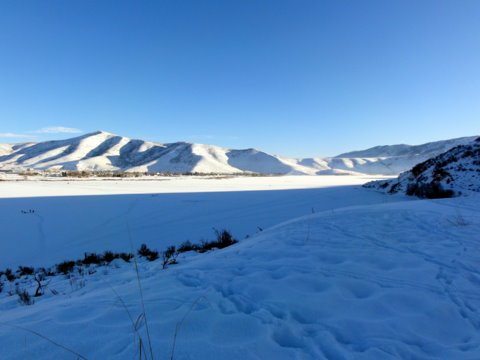 We didn't hike far, and in fact were just wearing our hiking boots. 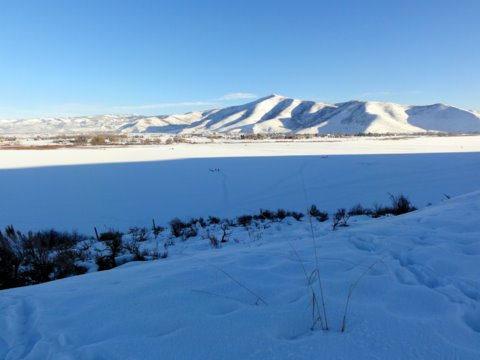 The frozen Deer Creek reservoir (where this past summer we had enjoyed watching sail boats gliding by as we took an old fashioned train ride along the shore line) now has group of ice fishers. 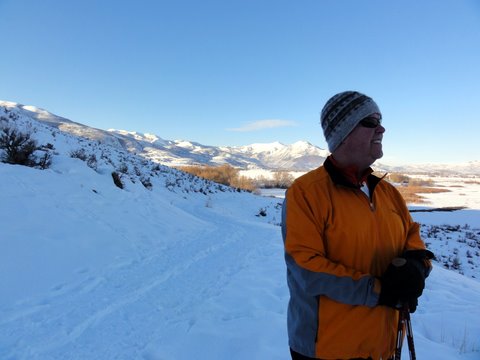 I think Bernie had also taken a Tylenol, but it was painful for him to hike along. 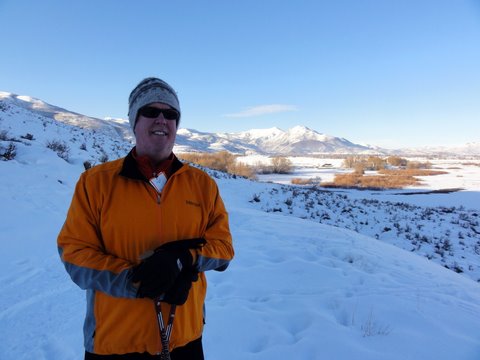 But look at the beautiful views!  Easy to just stand and enjoy. 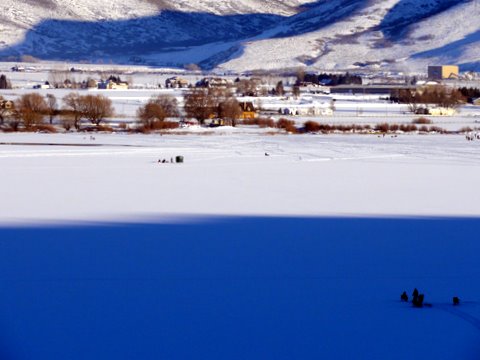 I've never been ice fishing myself, but I think I wouldn't mind just hanging out there on the lake with views like those to see. 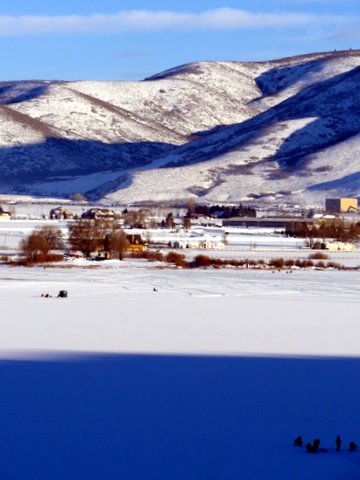 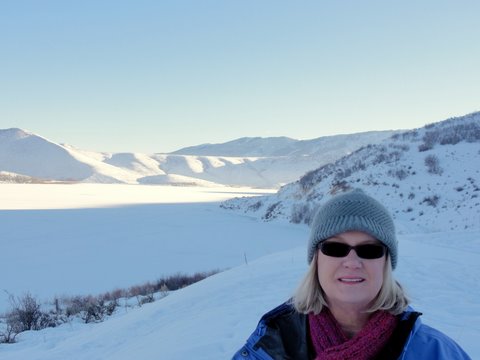 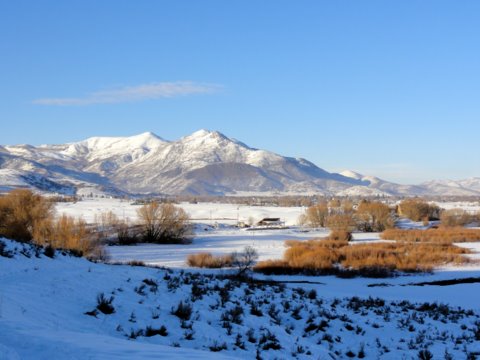 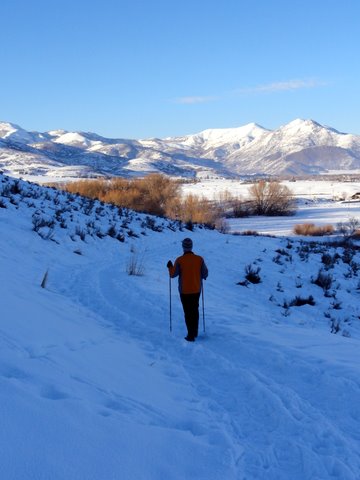 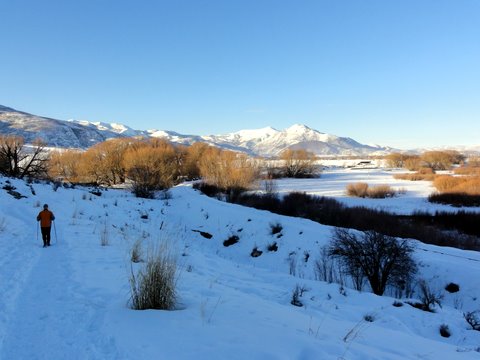 See the railroad tracks atop the curved knoll in the middle of the picture?
Now I want to take the Heber Creeper trail ride again in snow. 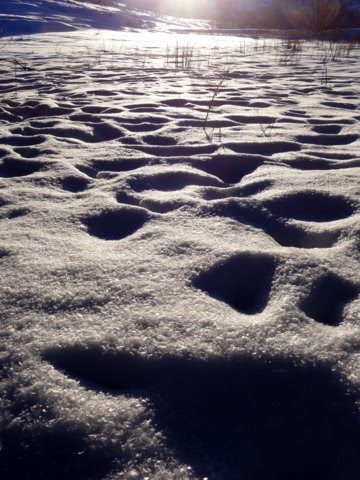 The snowflakes on the ground were just huge! 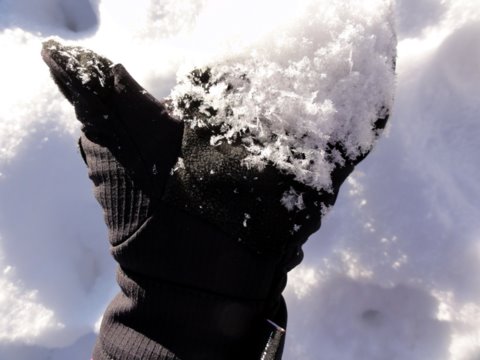 We hadn't had snow in five days, yet the flakes were still separated from one another. 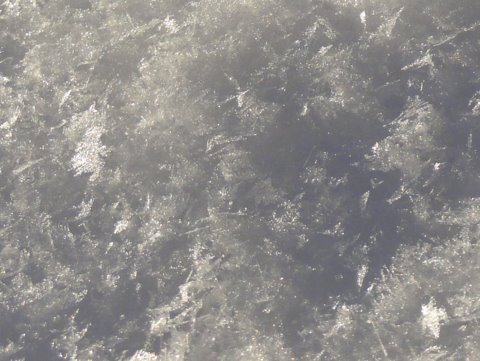 Crazy light stuff...just right for a good romp with a dog or a couple of kids, of which we had neither.
And since neither of us were really in any shape for tussling on the ground, we just enjoyed it for its own beauty instead.
From there we headed to see the spectacle that we had been waiting to see since last year at this time.
Come back tomorrow...oh it will be so worth it!

(PS: Bernie and I are both fine now...just a little bit sore, nothing serious. Wouldn't want anyone to worry.)
Posted by Thoughts on Life and Millinery. at 6:50 PM

Oh the things you do to show us such beautiful photos! I had my "last ski experience" way before you. We went night skiing at Stevens Pass ions ago and I fell really bad on the bunny run and hit my head. I stood up and said "that's it, I don't need this ####." I walked away and have never regretted it. I think snowshoeing could be something I'd enjoy. Looking forward to seeing what you've been waiting a year for...

Sooooo beautiful! I miss those mountains so much. I always think I should have learned to ski in my life ... but then I'm so uncoordinated in sportsy stuff maybe it's good I never tried it. But..what a fun day!

Oh I'm glad you are okay. I gave up skiing when I just couldn't really get the stopping bit. Terry had to give up skiing after breaking his wrist when the boys were still in grade school. Since then his shoulder injuries have further ended most sports where arms are needed.
Snowshoeing is still a go . ..so that is one we can all do together.
I bet I know what the next post is about. Gorgeous I'm sure.