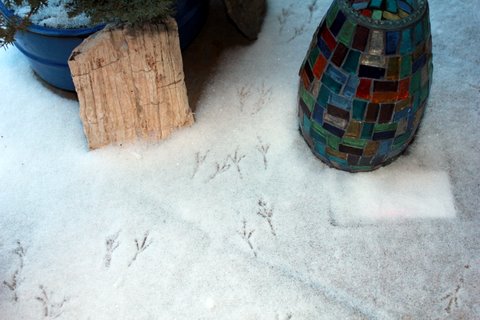 The year has hardly begun and already evidence of trails being blazed are apparent. 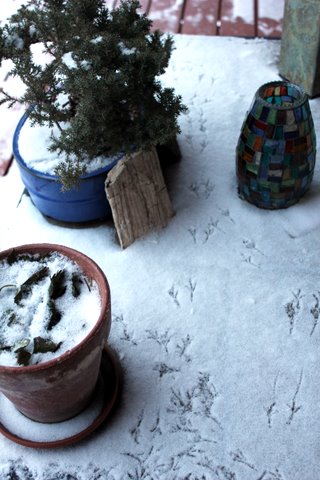 Some paths are straight, others seemed to have taken in error, requiring re-orientation to get headed in the right direction. 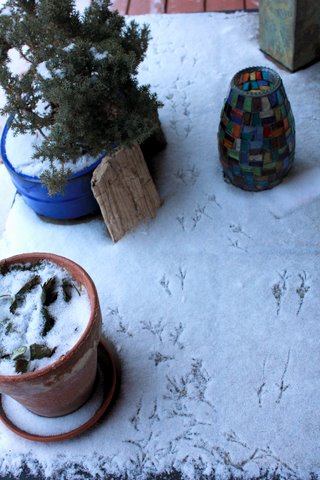 Some trail blazers had friends join in on the hike... 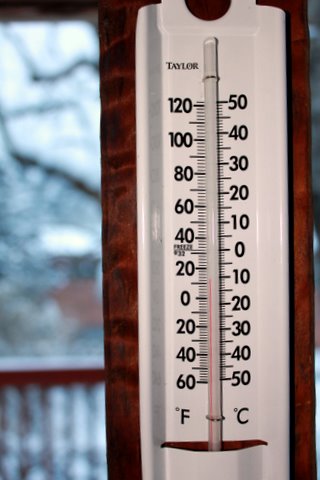 (Real friends stick with you even when it means being out in bitter cold.) 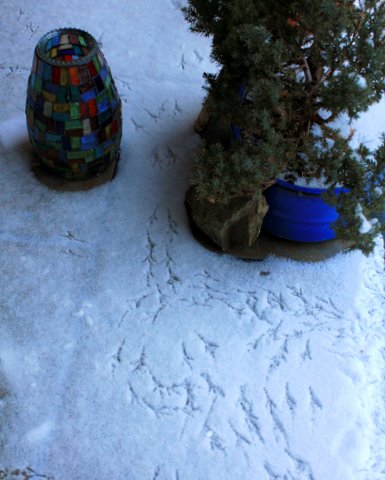 Then there are those friends who will join with you when you dance! 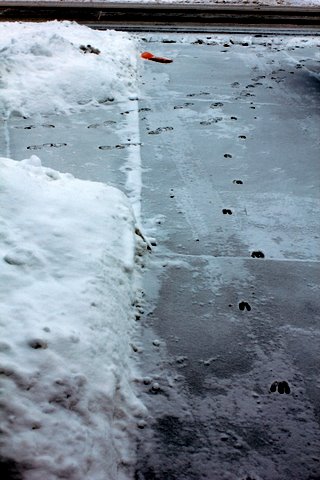 Passing in the dark:  A man and a deer both tread the same path, but at different times and for different reasons. 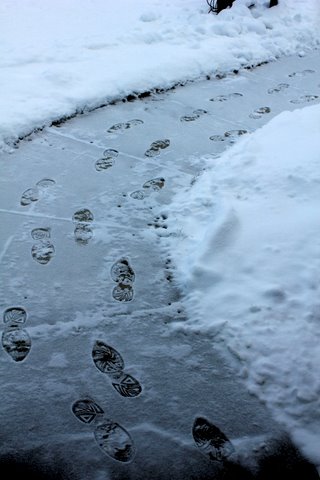 The Lord (and snow) notices our comings and goings. 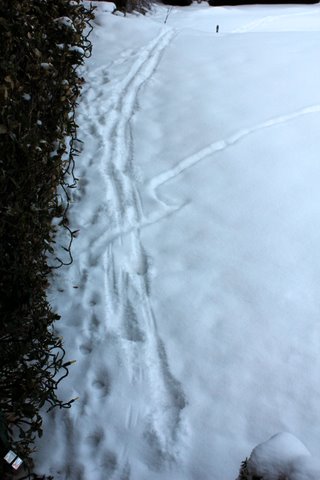 Mysterious trail blazers, whose mark our world in ways that puzzle us, sometime seem to know more about where they are going than we do! 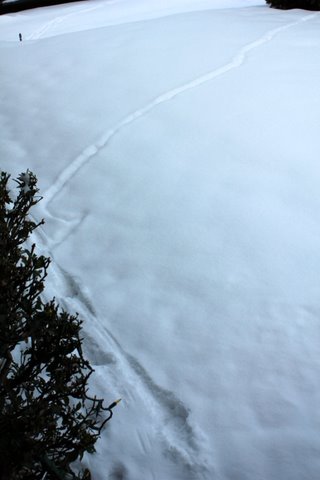 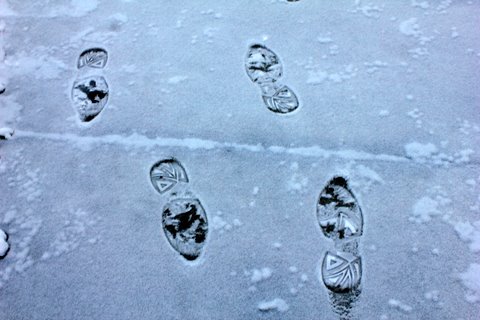 Ever feel like you are coming and going all at once? 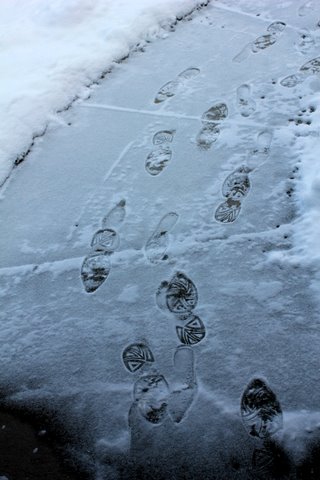 I added my own slippered footsteps to the trail as I slipped outside to get the morning newspaper. 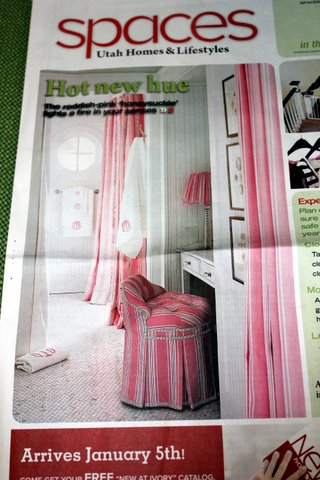 More changes are a-foot:  A new "in" color has been named for 2011!
Last year the color was turquoise.
Turquoise begone!
Honeysuckle pink is now in! 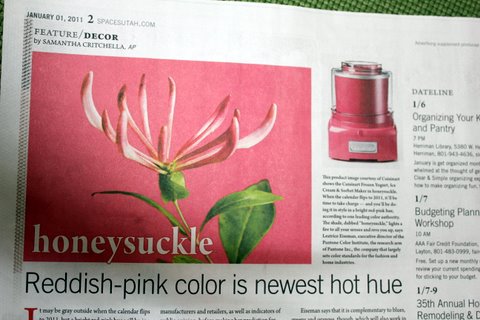 (Curiously, that is exactly the color I wanted to paint behind our head board last year.  It is also the color of a sweater I bought for myself so the cats could give it to me for Christmas, ahem...
And now I am considering using it in the downstairs bathroom along with turquoise to match the tiles, in a stripe.
Might even add a touch of celery green striping too.
Oh for more time, energy, ambition and less time at my job! 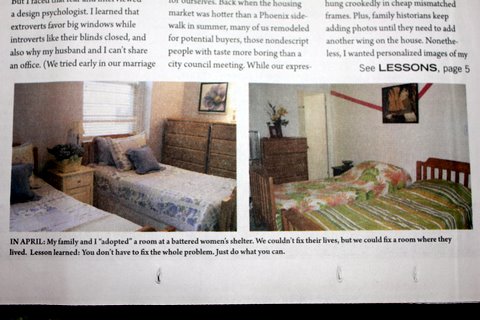 Interior decorating is fun...but seriously, after awhile, one simply must STOP changing things at home.
For those with a serious addiction to interior decoration: I vote the above decorating project be attempted!
Wouldn't that be fun and useful too?

OK...so here's what else I found today to make me laugh:
Quote from the newspaper columnist Ann Cannon.

She gave us 50 observations that she called Lessons That Carry Over to 2011.

1. Public school teachers (and NURSES!) should be paid more than professional athletes.
2. It's worth it to keep speaking to family members even when you don't feel like it.
3. Peonies would not be loved nearly so much if they bloomed all year long.
4. Running never really gets easier.
5. Given a choice between winter rain and winter snow, I'll take snow, thank you.
6. Have you noticed that you spend the first half of your life acquiring stuff and the second half of your life getting rid of it?
7.  Thank you notes are still a good idea.
8. Things often get worse. But then they get better. Until they get worse again. But then sometimes they get better again!
9. It is SO NOT TRUE that urine reduces the pain of a jellyfish sting.
10. Salt Lake City has excellent restaurants.
11. They should mention in prenatal classes that you never stop being a parent.
12. A great book for kids is often a great book for adults too.
13. The powers that be are well served by loyal opposition.
14. You say goodbye to your children's childhood when you say good bye to an old pet.
15. Taking offence is stupid: Most people don't intend to give it and why let the person who does have power over you anyway?
16. The good thing about winter is that you're allowed to put on your pajamas at 5:30 if you feel like it.
17. Change is hard.  But so what?
18. At the end of the day, America is still an amazing country.

What say you?
Any clever insights to share to assist us in making 2011 a really great year?

Remember where ever you go this year:

Trust in the Lord with all your heart
And lean not unto your own understanding.
In all your ways acknowledge Him
And HE will direct your paths!

Posted by Thoughts on Life and Millinery. at 12:10 PM

Ah. . my life verse to finish your post.
I nodded many times during this post. . .some of your remarks made me flinch. . and think.
That's good right?

I say it is time to go fry those Portzelky. . no one else is going to do it for me. . Happy New Year my friend.

You'd think those little animals making tracks in the snow would freeze their little feet-sies. Brrrr. Neat post though. I've wished many times I could have just stayed in Utah. So pretty.

Here's one...
Put the dirty dishes in the dishwasher instead of on the counter.
You really do get some interesting tracks. They are always more interesting in the white snow.
Happy 1-1-11 to you. Oh here's another thought. Pay our military more then politicians!
Blessings...

Number 16 is my favorite!

My mother is from a little "holler" in Kentucky, and those deep-country folk are full of old-wives' tales and odd beliefs. One that Mom drilled into us is that the first day of a year/month sets the tone for the rest of that year/month. (Rain on the 1st day indicates rain for at least 15 days that month, etc.) What you do and how your house looks (clean, neat, messy, pigsty...) is significant, too. Therefore, Doc and I spent the day rearranging his study and deep cleaning it and really cleaning out my closet... throwing things out and sorting things for donation. Not too shabby for two people who have been "sick nigh unto death" this week! Along that same line, I really like the suggestion in the magazine about "adopting" a room in a women's shelter and doing it over. I think that's a fun idea and think of the boost it would give those women (and think of their children, too)!

Our tracks have taken us off our normal paths this last year, and we've found some marvelous friends whose paths merged with ours for a while on our journeys. Even when those paths diverged, the friendships remained. God knew humans were not to be loners. Life would be pitiful if it weren't for our spouses and our families and our dear friendships. I like knowing there are friends and loved ones who join us in life's dance!

I pray that we find ourselves dancing joyfully through 2011!