(Side Note not related to this post: New header photo was taken in Mill Creek Canyon, SLC on Nov. 29 2010.) 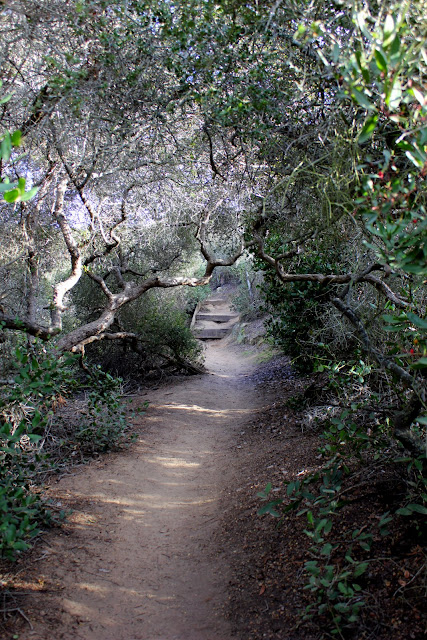 Walking back on a different trail beneath coastal flora that scented the air with various herbal fragrances.
Again: you can imagine how such a path would feel to trod in a dense dripping fog?
Quite mysterious. 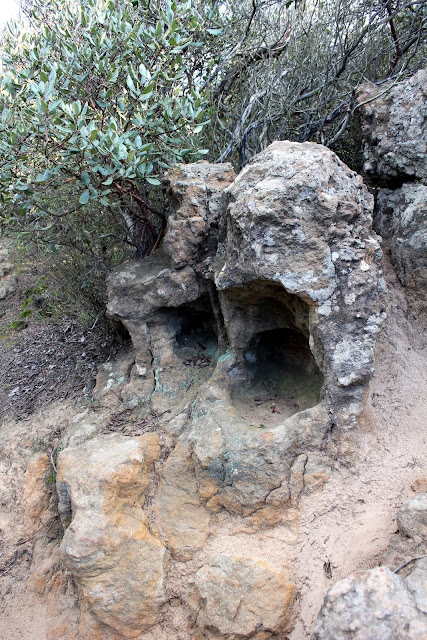 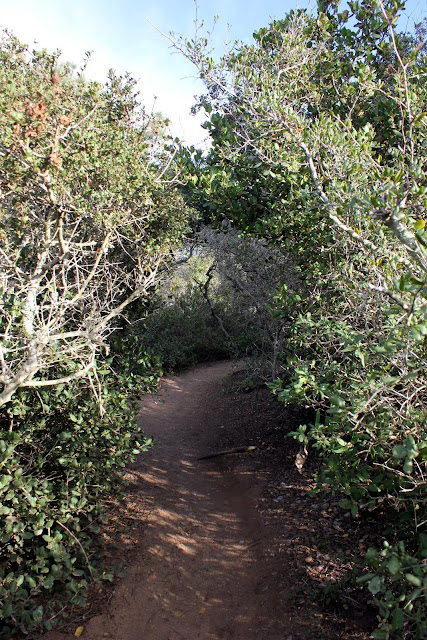 What would be found around the bend? 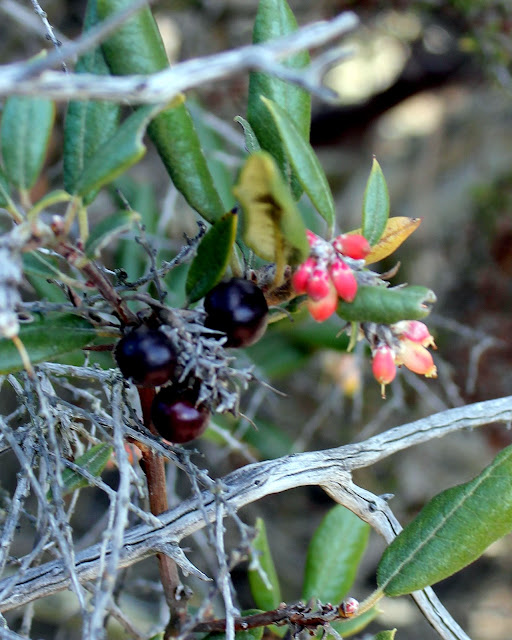 There were lots of small valleys and hills; a trip to the distant Torrey pines would require some serious brush breaking.  Now days I think such activities would be discourage.  Keep on the path is the creed for the park now.  Pity...it was so much more fun to blaze one's own trails back in the less ecologically sensitive days. 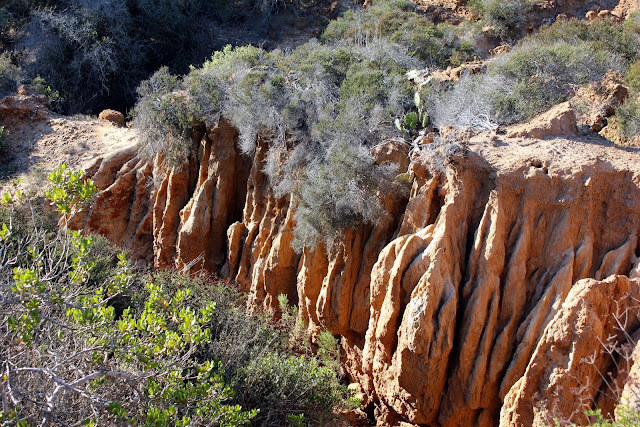 If allowed, I would carry a small lounge chair and nestle in next to eroded red walls like this one. 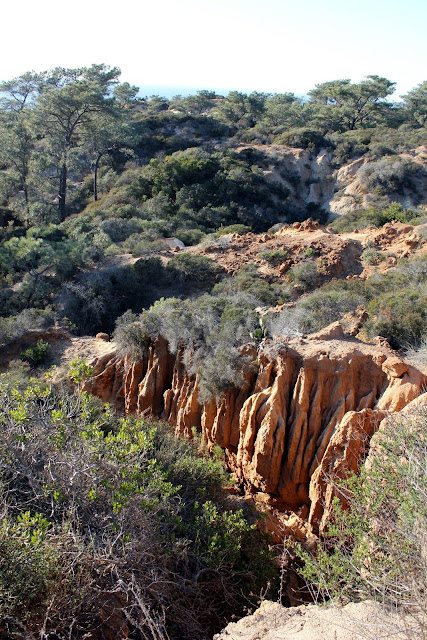 Hanging out with a good book, or a sketch pad would be an idyllic day well spent in my opinion. 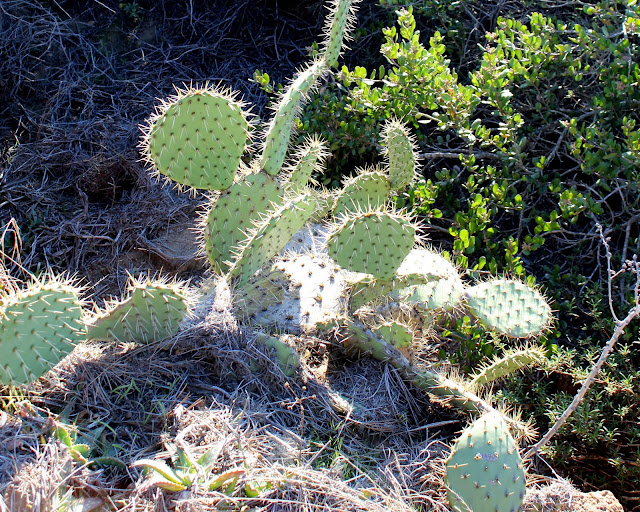 I love these kinds of cactus for their flowers and their prickly pears, especially when the pears are later made into jelly.
I suppose the public is not welcomed to come harvest the pears now days. 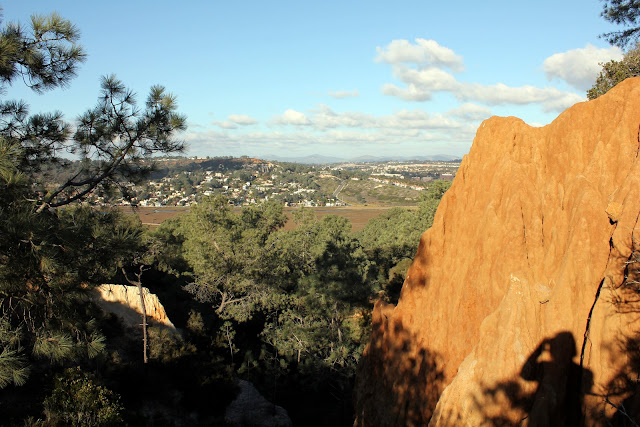 At least I can do one thing now that I couldn't do back then.
That my shadow:  Me! Taking all the pictures that I want. 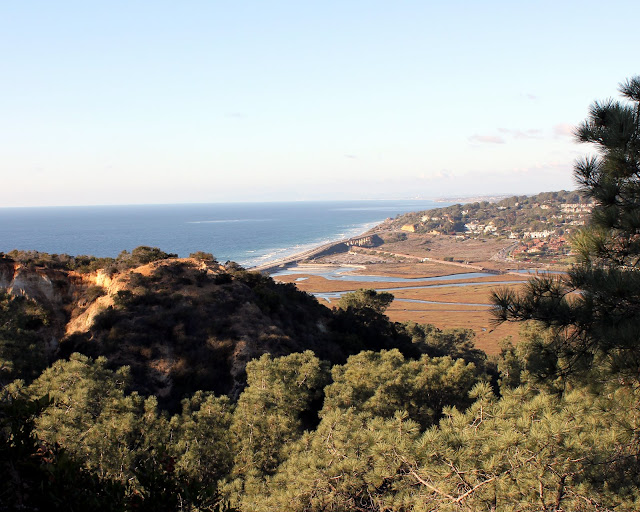 Below the park up north is the lagoon and the beach.
Neither B. or I can remember the names of that beach and lagoon.
(Guess we've been away too long?) 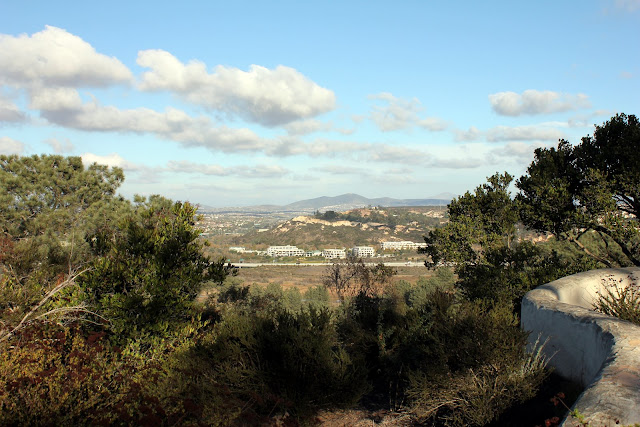 The hills in the distance didn't have houses or businesses when I was growing up. 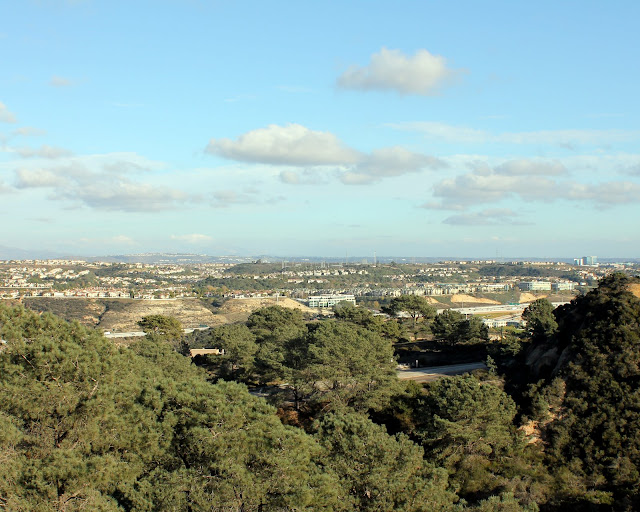 Now there are condos and business building as far as the eye can see.
I am so thankful Torrey Pines was designated a California State park long before the surrounding properties became fodder for building expansion. 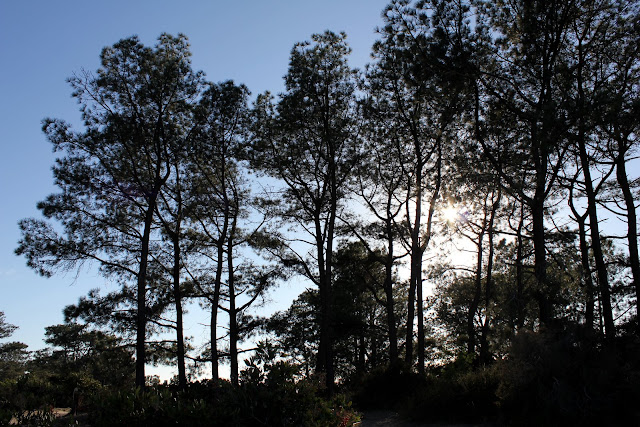 Otherwise I think scenes like this one would be long gone.
Of course California is "broke" now; I do hope there is no way the park can be sold to raise funds.
(Again: this scene at sunset, or morning fog: well worth planning a trip to view such a sight.) 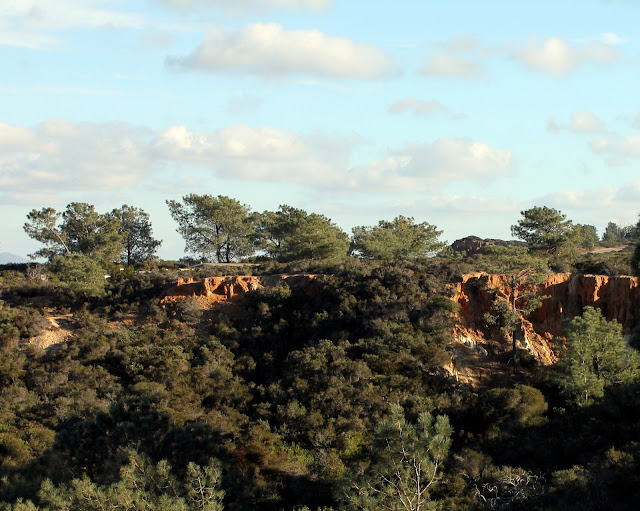 We students were also told that tree ring dating revealed that there was at one time a huge amount of rainfall in this area, and hurricanes and all kinds of wild weather.  San Diego has been considered desert like for at least one full century; it would be pretty crazy if the place suddenly receive tons of rain regularly.  It would totally change how the park looked. 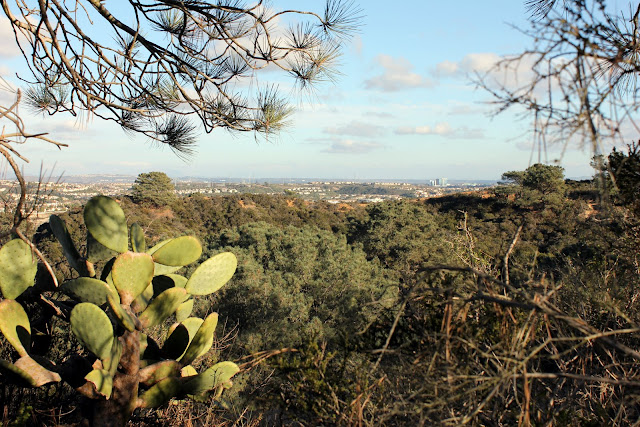 Wouldn't it be amazing if the cactus switched out for fern? 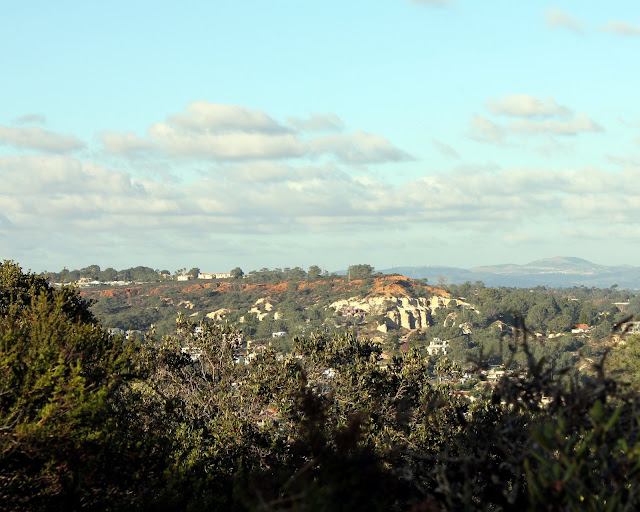 The condos and buildings up on the cliffs would slide down to the valley below.
I know I am sounding like I am making a negative future prediction; actually most of us natives look at such kinds of building as being pretty risky what with all the earthquakes and variable historical weather patterns.
Those sand stone cliff: Didn't the Bible say something about building houses on sand?
Just sayin'.
Hope they are enjoying their view for now! 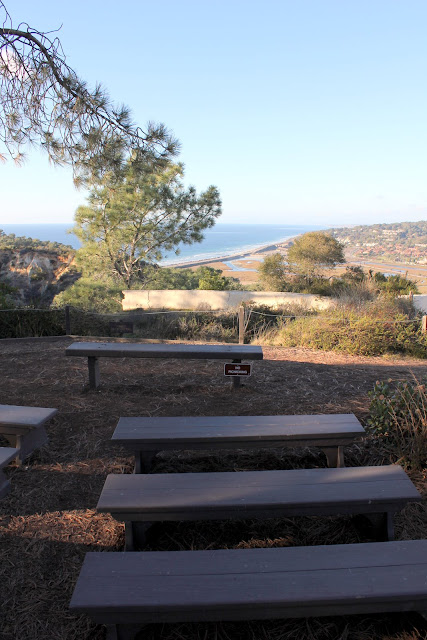 The park has a small "theater" setting where Ranger Programs are held.
There used to always be chapel services at the State parks when I was a kid, led by volunteers.
I somehow remember services being held here; Bernie says he doesn't recall that.
Who would need a stained glass window with a view like this one to look at? 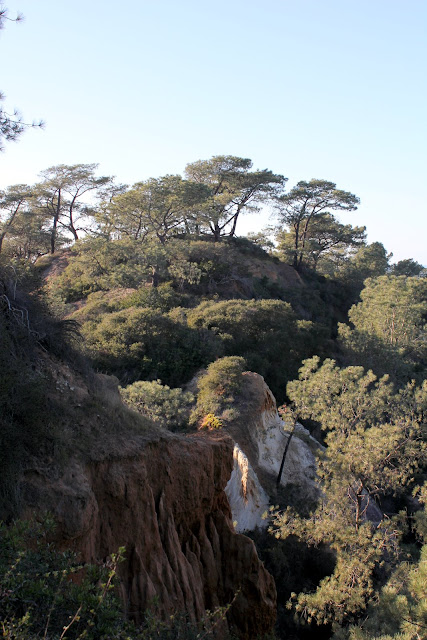 I should of rounded up a Ranger and asked what was up with the white soil interspersed with the red soil. 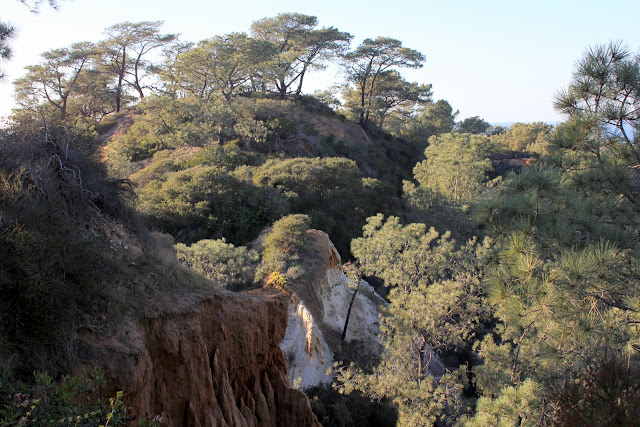 I'd be willing to own that the Ranger of my childhood explained that one to me.
Wonder where that little factoid wandered off to from my brain? 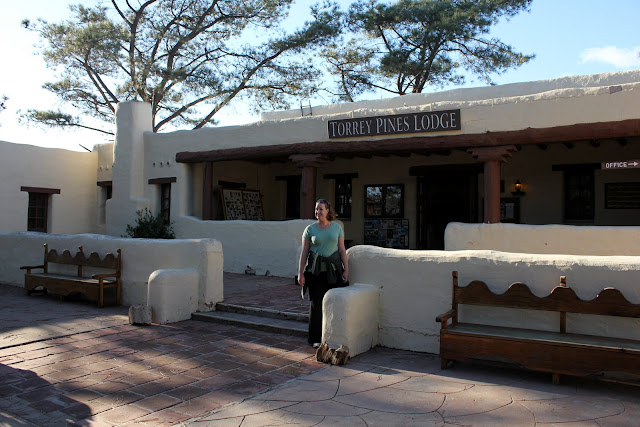 The park has a small museum housed in an old structure built in Nov. 1923, a month before my dad was born.
A park volunteer that we met outside this building told us that this structure was built using timber salvaged from a burned structure elsewhere.  Ellen Browning Scripps paid to have this building built.
(Ever heard of Scripps Howard publishing?  That Scripps family.  I attended Ellen Browning Scripps Elementary School, which was just blocks away from Scripps Institute of Oceanography.  La Jolla is just full of Miss Scripps' generous financial support.  You can read about this fascinating woman HERE.) 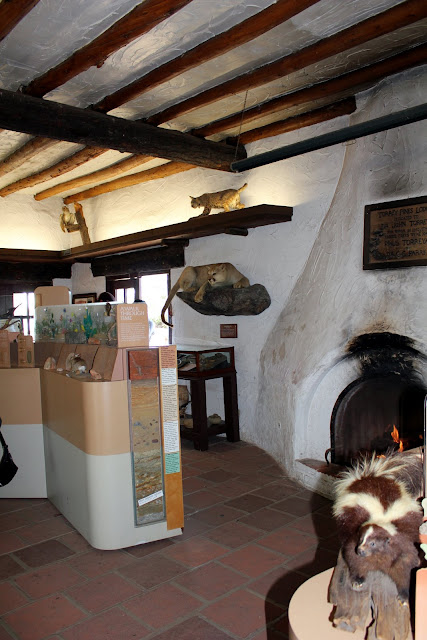 As an adult I found the building itself more interesting the stuffed critters on display. 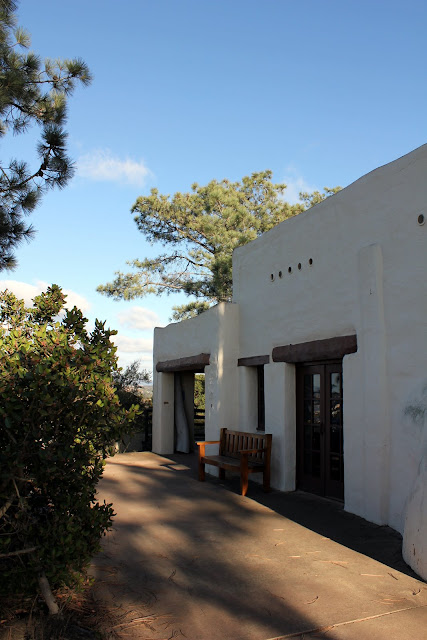 I asked our volunteer where the Fat Man's Misery Trail could be found.
He knew about it.
The trail had become a favorite party site some time ago.  The rangers had to keep going down the trail to haul out all the trash left behind from the parties.
It was decided to shut the trail down by planting plants on the trail itself and the trail head and beach entrance.
According to our volunteer, the trail is no longer passable.
Frankly, that didn't sit well with me.
As Bernie pointed out, the Ranger's house was just across from the trail.
Why couldn't they police the area instead of ruining a very special trail?
Was that choice even ecologically appropriate?
The volunteer also shared that for the longest time the Park Rangers refused to carry side arms. Now they have to go from firearm training six weeks a year.
The state of California now only funds one ranger for the park, and volunteers pick up the rest of the slack.
It was his opinion that it wouldn't be long before the park was solely volunteer managed.
(Interestingly, the volunteer was also close to my Dad's age, and had grown up in the same area of SLC that we live in. He was heading to SLC to see his brother next week.  Small world, huh.) 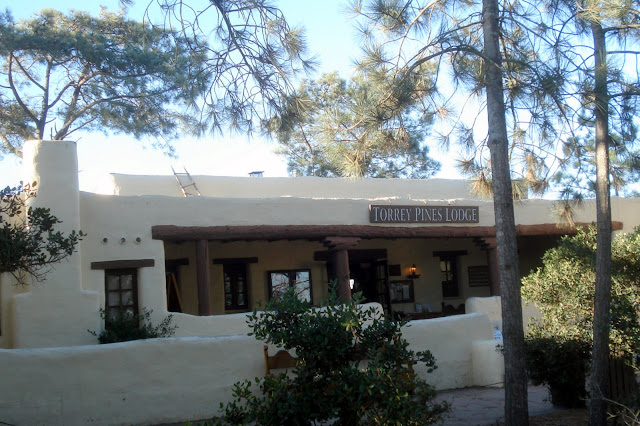 I hope this old adobe structure with the roof ladder and heavy salvaged beamed ceiling will remain for years and years to come.
While I am chagrined at the changes in the area, I have to remember that long, long ago the area was home to Native Americans who lived simple lives amidst this forest.
They probably would have been disturbed by the changes that made up what I considered quite charming elements of my childhood. 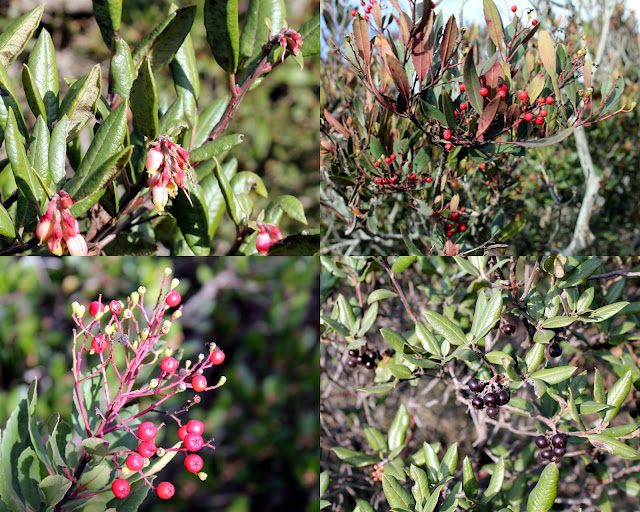 (I must remember to visit there again in spring time to see the park in flower. Here's a few pictures of what flowers and berries were to there to be seen in late November.)
Posted by Thoughts on Life and Millinery. at 9:50 PM

Yes, I'm with you...a lounge chair, a good book, something to munch on, and some water and I'd be fine up against the red rock formations. As always, it's interesting to read your viewpoints.

So wonderful to visit here with you. There is so much of California I never explored...
They never talk about all these wonderful things rich people like Scripps, Gettys, Admundsons do with their money for the benefit of all of us when they want to tax them to death or redistribute their money. I doubt the government would do these kind of things with the money they steal from them. Just my loud opinion...

Do you remember a bush growing there called the lemonade bush? It had some sort of berry that was a bit fuzzy and if you rubbed it with your fingers and licked your fingers it tasked like lemonade? Surely I did not make this up?

Thanks for the link to Miss Scripps. I was born at Scripps hospital; in those ancient days it overlooked the Pacific Ocean and I recently learned the building has been turned into condominiums. If I ever win the lottery (first I have to buy a ticket!) maybe I can buy one and spend the rest of my days on earth in the same place I first came into it! I like to dream....

PS: The link to Helen Scripps did not go to the right place....but I did find this one on my own:
http://www.sandiegohistory.org/bio/scripps/ebscripps.htm

Oh Sara, I had forgotten about those! There was also a sticky leaf that when sucked kept changing flavors. Fun!

I love your new profile photo...just noticed it.

Wow, I read the information about Miss Ellen Browning Scripps...what an amazing woman. Now I want to know more about her.

It was fun revisting Torrey Pines Park again with you. It has been many years since I have been up there and I remember going down Fat Man's Misery well. The beach you were looking down on from the north end was of course Torrey Pines State beach. THe logoon I think is San Elijo but I will have to get a map and look that one up. That might be the next one up. I remember well going thru the park as that road thru there used be the old highway 1 to Los Angeles. Ah, long gone memories to cherish for both of us. Love, Mom

Sara's idea of buying a condo that was once a hospital made me smile. (Sara, we always dream of what we'd do with the winnings from the lottery tickets we don't buy, also.)

Thanks for taking us around 'that next bend' in Torrey Pines. I'm with you...glad it was designated parkland long ago and hope it stays that way!