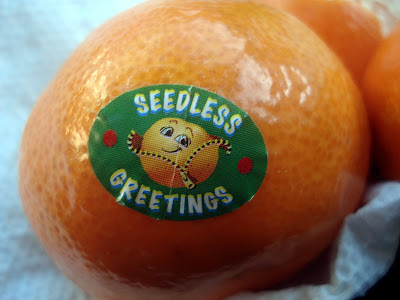 Even the Clementines are talking these days!

(Don't you just love those "California Cuties" that are so easy to peel and smell so great?) 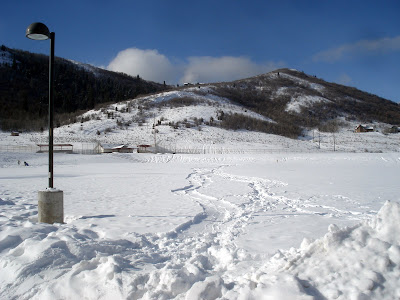 New Year's Eve day B. and I had planned to go sledding. The sledding park with the huge tire tubes and ropes that pulled you to the mountain top was just packed. The line just to get tickets would have taken an hour to get through.

We looked at each other and drove on...looked out the car window at the snow covered hills all around us and decided we would go sledding the good old fashioned way. 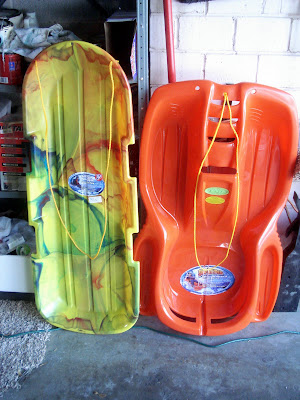 A quick stop at Wal Mart and Bernie procured two sleds for us to use for our adventure. 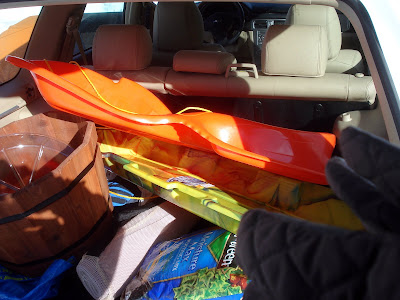 They fit right into the back of the car.
We drove around for about ten minutes to pick out a place (the first picture on the post to be exact) and soon I was trudging along in knee deep powder towards the hillside above a school. We were the first ones there to blaze a trail!
I had the orange sled, of course. It featured a photo of a small boy looking ecstatic as he sledded down a snowy path. Mentally I noted that if he fit the sled, I wondered how I would do with it.
Bernie had the yellow sled. He went down the hill first. It turned out that there was absolutely no steering mechanism on his sled, save shifting one's weight as best you could.
I went down next. The sled seat felt a little tight...but after all, I was wearing a bulky powder suit. Those things add inches you know.
First ride down: Great!
Second ride down: Fun!
We switched sleds. His was a lot scary..at least with mine I could steer a little bit with my feet.
A few more rides down the hill, back on the orange sled...then I blazed a new trail and it was Yard Sale Time!
(A Yard Sale is what the folks around here call a wipe out while skiing or sledding where you crash and your hat flies in one direction, your body in another, gloves, or whatever else was loosely attached scatter across the scene like merchandise in a yard sale. Which was exactly why I chose not to carry my camera up the hill!)
My back got tweaked, and a bit bruised as well.
After that I amused myself making snow angels, and crawling around in the powder like a dog hunting for a scent.
I flipped on the back and enjoyed the sunshine.
I would have made a snowball and started a fight but the snow was so powdery it wouldn't stick together at all.
By the time we headed back to the car I was soaked from sweat inside my powder suit, yet the car's thermometer showed the temperature was well below freezing.
It had been a great work out hiking through deep snow and up hillsides.
As we loaded the sled into the car I took a moment to read the sleds warning label: 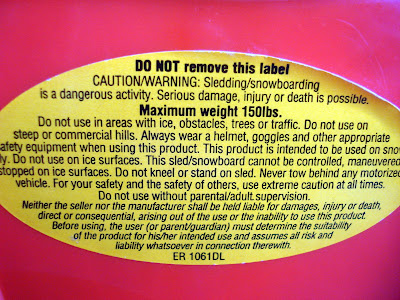 Oops.
No goggles.
No helmet.
No "adult" supervision (unless B. was to supervise me and I was supposed to be supervising him. Our parents certainly were not interested in supervision duties at their age!)
Weight limit 150 pounds?
Gosh....what with the snow boots, and all, I was probably a pound or two over the limit. (smirk)
6' 3" Bernie was definitely a few pounds over the limit.
Glad we hadn't bother to read the label before we started having fun.
It would have been a total buzz kill.
Like the saying goes:
Knowledge is power, but ignorance?
Total bliss.
Posted by Thoughts on Life and Millinery. at 5:16 PM

All's well that ends well...and it sounds like a good time to me! Just think of all the $$ you would have left at Walmart had you also bought goggles and helmets. It would have been an expensive adventure.

OH goodness you two are like kids out there experiencing winter with spare time this year.
I remember many years of tobogganing and one year in particular when the boys were given a skookum cart with steering. I cant' remember how it exactly happened but Terry hit hard at the bottom and decided to give up the sport till absolutely necessary which seems to be coming soon.

What a cute post! So glad you could have the fun before reading labels. They're over-rated anyways.

You two just have toooo much fun!

Lovin' the clementines, too!
YUM!

It sounds like the two of you had a great time! We did a lot of sledding and tobogganing when we were kids...and before we could afford sleds and toboggans, we used to pull each other around on flipped-over garbage can lids! The day we moved from Kentucky to Texas, we gave our toboggans to my nieces...and it snowed two years in a row in Texas!