What's up with Iran? 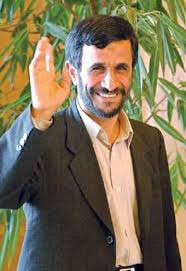 Pictured above: Mahmoud Ahmadinejad-Current President of Iran
The "Summation-In-a-Minute" of what is up with Iran:
The President of Iran believes the Muslim Messiah (AKA the 12th Imam) is returning to the world in the next year, from a well (really!) in one of the Mosques in Iran, and that it is the Iranian President's duty/destiny to prepare the world for this.
Mr. Iran President went from a 1% recognition to winning his election, and has poured tons of money into fixing up the Mosque with the well.
But...the big gut grabber is that for the 12th Imam to come back and make paradise for all nice Muslim folk, Israel must be gone. In Iran's point of view, USA is the Great Satan that provides the $ that makes Israel's existence possible, so first the USA needs to get knocked out, and then, without USA protection, Israel/Jerusalem can be wiped clean of Jewish folks.
Mr. Iran President is "full speed ahead" with this project.
Christians speak of the "end times" but they don't have a game plan to MAKE the times come ASAP. This 12th Imam guy will only show up IF the world is knocked into shape (Israel and USA gone.)
So Mr. Iran President is, in his mind, divinely appointed to do any and everything necessary to set the stage. And he has no reason to worry that there *might* be consequences to his actions. After all, paradise awaits. Let's get this show on the road!
And Mr. President is not shy about the fact that a nuclear devise would make that all possible, really quick. It really, really doesn't matter if the bomb messes up stuff, because all that matters is the #12 gets here, and thereby ushers in paradise.
Above is a copy of a post that I posted in 2006. This link from the UK newspaper Telegraph ducuments my concerns. And this article review what Israeli leaders are saying.
Jeepers. I was hoping my 2006 post, which gave a time line of 2-4 years for these events was about to time out as an unfounded concern.
I'm still hoping that a year from now, the 12th Imam will still be missing, and all will still be well with the world. See the post previous to this one to see why I am keeping an eye on the news this week about missile launches that involve North Korea and Iran.
Posted by Thoughts on Life and Millinery. at 2:36 PM

scary stuff Jill .. and people are worried about a bit of of a worm that will eat computers tomorrow. . I think we are headed for very different times.

I agree with Lovella....the times are very sobering when we give them attention like this and really think about it instead of burying our heads in the sand....or in the drivel and constant noise our culture bombards us with on TV and elsewhere. There is certainly much to pray about and intercede for.

Interesting prognosis! Hmm... and we are worried about weight and jobs. Good thing I have a big God who knows my future and will equip me for what is to come - even if it doesn't look good from this side of the heavenly curtain.

Positively love this post, people are retarded and don't pay attention. They want to watch the game & drink beer. Either that or watch American Idol, or Lost. Not that TV is bad...it's just the start of many distractions.

I'm a truth seeker and am painfully aware of this scary fascist dictator. This is a man who claims there are "no gays in Iran". If you're found to be a homosexual in Iran, it's simple...they hang you. America simply is not tuned into this. Many think the whole world is just like America. It's not. People have gotten fat dumb and happy since WW2 was fought & won. Progressive attitudes make one think that we can all get together and sing kumbaya. It doesn't work that way. Radical Islam has stated "death to America, death to the infidel". There is no kumbaya with people that are indoctrinated from birth, to embrace a culture of death (that if they are martyrs they will be greeted by Allah 72 virgins).

That said I have sincere misgivings as to whether or not the new administration will be firm enough with this nutball. It's way different than the cold war. It's a new age, where suitcase nukes could be a reality. It's frightening, we as individuals can't do much...but as a whole we could do alot. Being aware is the first step.

I listen to alot of talk radio when I make hats ;)