Basement: Before, After and a Surprise 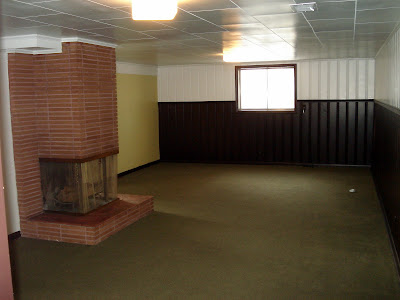 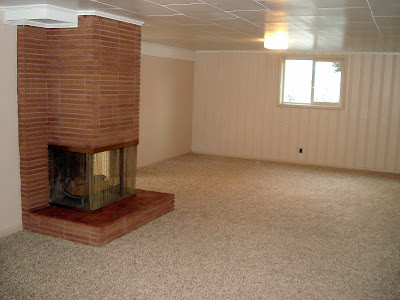 After: Not gloomy now basement: View to the west.
A tad bland, but pictures on the walls and furniture will jazz it up later. 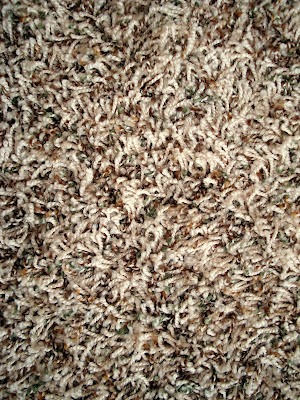 The new carpet: beige with fireplace rust flecks and sage green flecks.
(and it is super soft....) 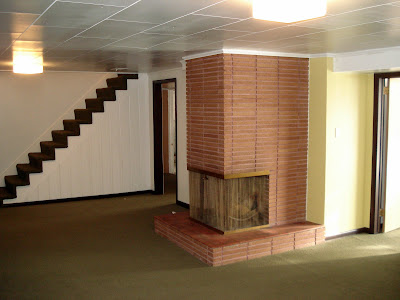 Basement before: view to east. 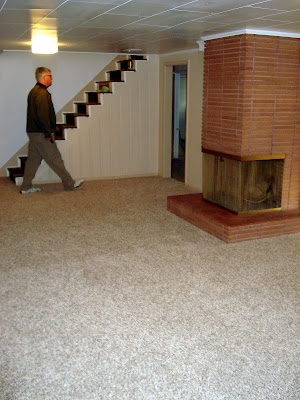 Basement after: View to east.
I've been researching a lot about 50's ranch houses. The basement was usually used as a recreation room.
With very specific elements.
As the carpet guys started tearing up the old rug, I watched and waited, hoping.... 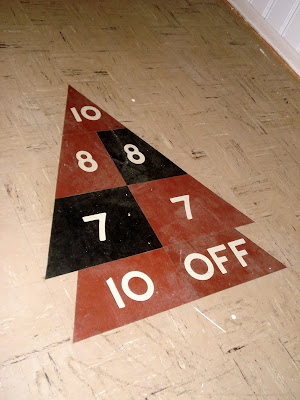 And my hope was not in vain.
A true 50's style entertainment center: an INLAID shuffle board court was under that dismal old carpet.
Ahhh...one of the joys of discovery that comes with remodeling an older home. 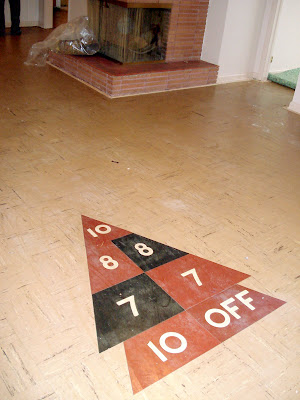 Can't you just picture it now?
A roaring fire, bottle of soda pop and chex mix...
The kids all dressed like Richie and the gang from "Happy Days"?
Cool!
It just broke my heart to have to cover it all up again.
But since floor tiles are made of that oh so popular '50's style asbestos...
(which is fine is you don't scuff or buff or break it in anyway...with scuttling shuffle board pucks for instance)
it had to be safely covered again with wall to wall carpeting.
Sigh.
At least I know it is there.
The packers will be here in the apartment in an hour, gotta run.
It is moving day again...the third time in five months.
One more 'moving day" to go, when our Houston household furnishing gets moved into the house in March.
After that, I just want to find a good (safe surface) shuffleboard court and play away the day.
Monday , Tuesday, Happy Days....we're gonna rock around the clock tonight!
Posted by Thoughts on Life and Millinery. at 9:07 PM

Oh wow. That is pretty much the most random, cool thing I have ever seen! And I must say that I absolutely LOVE what you have done with the place!
You so rocked it!!!

Jill, it looks wonderful . . .truly bright and cheery and I love the paint and carpet. .awesome choices. Enjoy that first night. . it's always so exciting.
Happy Dreams. . .I am sure you will be exausted. . oh but you have that bubbling hot tub. .lucky duck.

WOW!!!! The basement looks so much better and brighter! Nice choices on paint color and the carpet. Hope you are seeing a light at the end of the tunnel as far as moving goes. You are in our thoughts. Love, mom S.

I'm familiar with the 50s style rec rooms, but I've never seen the inlaid shuffleboard court before. Perhaps that's because most of my friends' parents had the room carpeted.

Great job! Everything looks good and the carpet looks so comfy. I can't wait to see how it looks with furniture in place!

Okay, so I'm not buying a 50s ranch house, but I need info for remodeling a kitchen (cabinets, counters, tile - floor and backsplash - paint, appliances)...point me in the right direction(s), please!!

Looks good, Jill...
RE/the shuffleboard: never mind the rock around the clock....how about some MOTOWN???
:)

I definitely prefer the 'after' to the 'before' !
The shuffle board court on the floor is the neatest thing! You couldn't have at least made a 'flap' in the carpet so you could lift up just that section to show off your vintage game?? smile..

Sounds like you will be super busy for the next while - BUT you are soooo gettting there, don't you think?? 'Happy days' to you!!!!

I love the hilarity of the shuffle board. If you really wanted to, you could cut out a piece of the carpet and have the shuffle board at your disposal at all times. Might be a little complicated playing though......
The renos are lovely. Well done oh stylish one.

Great job! It definately looks airy, warm, clean, and usable, although, I agree, its sad the shuffle board had to be covered. It is a conversational piece all on its own! I wonder what you will end up using that space for? Hmm... tupperware parties, Avon parties, ... or wedding showers, and baby showers? hmm... just a huge space waiting for laughter, prayers, and love. You'll enjoy your new old home when you put your feet up on a vintage lazyboy rocker. Got one? I'll keep my eyes open on e-bay for you. haha. (I hope the joy in my voice is heard through the typed letters.) Your creative juices are just warming up!

It looks great! I especially like seeing the before and after pics.