Hurricane Ike went directly over Kingwood. Power is out all over Houston; we don't know how our house is, but we are sure our neighbors would have called us if something was terribly amiss. We don't want to call and use up their cell phone charge (maybe they can use their car to recharge it?), so what else is there to do but go on about our life, and pray for those who have a lot of clean up ahead of them.

It isn't going to be pretty in the Houston area for quite awhile. 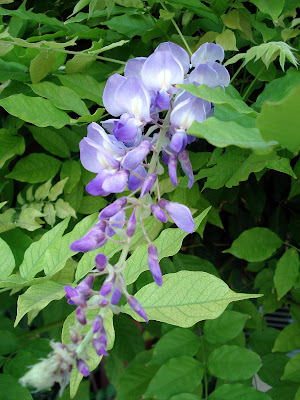 Life here in SLC is fine. Wisteria is blooming-now that is an oddity isn't it Sara? So Calif wisteria blooms in the spring and makes pods in the fall. This wisteria was blooming around the local Olive Garden restaurant entrance. 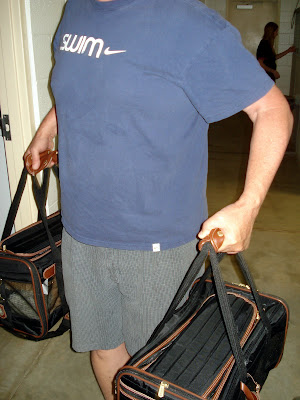 We were able to rent an apartment and get the cats out of storage after ten days. They had kind of gotten used to the kennel, all their "pal" had gone home except Hallee, and a new bipolar cat was busy hissing and lashing out at us as we left. Good riddence to that poor fellow; he managed to nick both our boy's noses when they were doing neighborly snoopervising while they were out of their kennels on their exercise break. 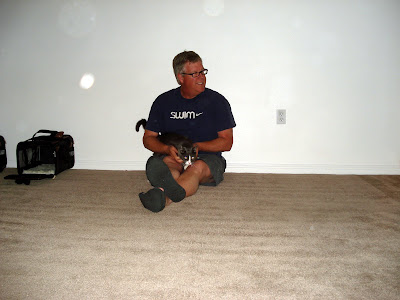 Getting the cats used to a new empty apartment did nothing for their frayed nerves. B. held them, and petted them, trying to reassure them. 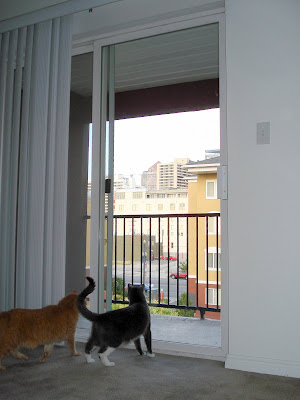 When they get a bit more used to the place we will let them go out on the balcony. 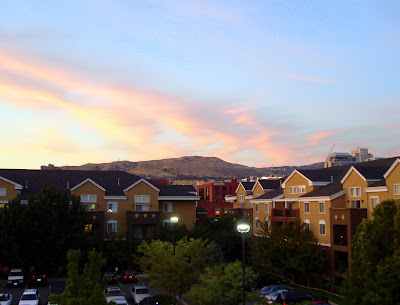 The balcony had a great view that first day; the sky was beautiful. 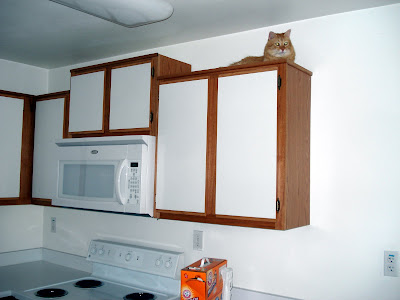 Tiggie preferred a different view. Later Hart took up residence in the corner area...frankly, anything that makes them feel more secure works for us right now.

We don't intend to invite anyone over who would judge us on our cat's lack of manners anyway. 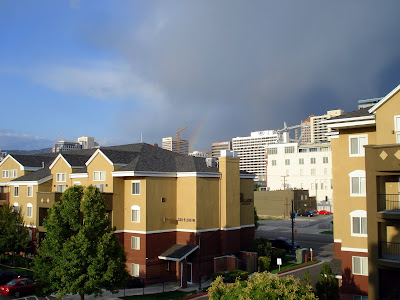 The next day we visited them again, and there was a rainbow over the city.
We have a view of the Key Bank building, Wells Fargo bank building, the US bank building, and the Chase bank building. And the Hilton. Let us know where you bank and we'll keep an eye on your money! 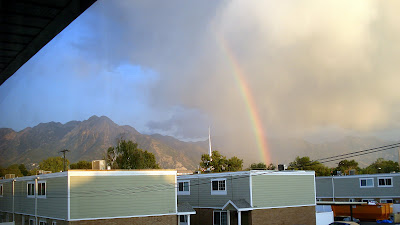 The other end of the rainbow was arching over Jeff's place. Nice symbolism, huh?
(Acutally I followed the rainbow all the way home, stopping several times to try to get a better shot.) 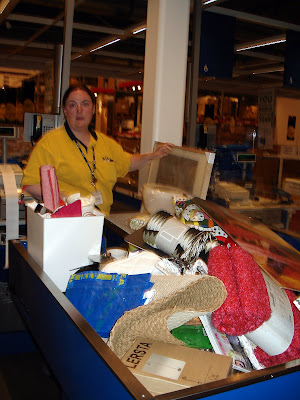 Last night we had a FABULOUS date! We had had movers move Jeff's guest bed, small chest of drawers, a lamp, an end table, three bar stools and a grey recliner. Since we needed everything else for daily household goods, we headed out to IKEA. 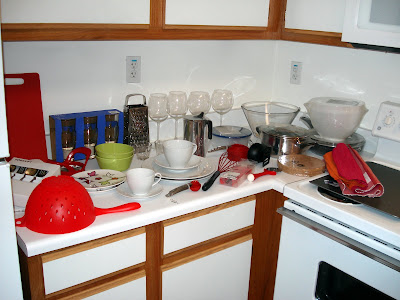 Here's the kitchen supplies.
See Lovella? I did get a bunch of red things! The red wisk was cheaper than the stainless ones; and the red apple corer was just too fun to pass up. Red measuring spoons and cups and strainer.
IKEA prices are just cool. The big clear glass bowl in the corner was under $4. 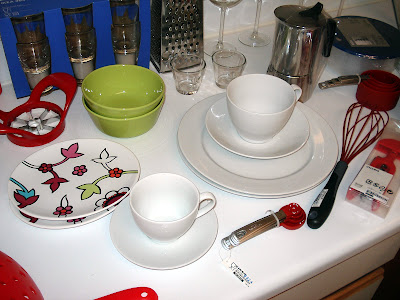 Our "love nest" now has table settings for two. We had so much fun figuring out what dishes to get...B. picked the white, I added the green bowls and the printed side dish. And colorful placemats (at $1.49 per placemat, why not have a little fun with that?) 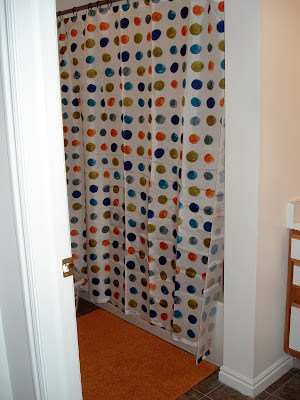 I told B. to pick out the shower curtain; he picked the one I was eyeing! Flashback to Kate's orange themed apartment in Switzerland! Of course we had to get an orange cotton bath mat and towels too!
That's going to be a cheery wake up place to be each morning. 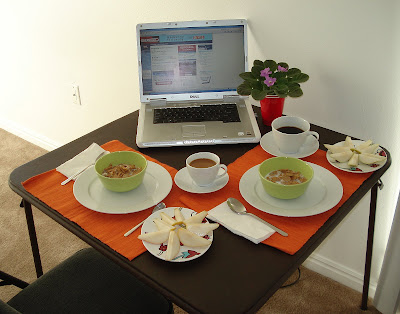 So here we are, having our first meal in our apartment, watching the news about Ike on the Internet.
Ike...Ikea....hum, isn't that odd how much difference a single letter can make?
I'll post more of our apartment pull together as it happens. We are trying to decide on a second seating option (IKEA Poang chair or Ektorp couch? Or...????)
Outside our apartment the church bells are chiming the hour, just like they did in St. Gallen Switzerland.
Seriously, how cool is that?
Thank everyone for praying for our house in Kingwood and all that is going on with us.
It has been really something being on this adventure.
But rainbows are to be seen, and would you believe this: as I type this it is noon, and the church chimes are ringing one of my favorite hymns:
Oh Sing a Song of Bethlehem:
~
O sing a song of Bethlehem, of shepherds watching there,
And of the news that came to them from angels in the air.
The light that shone on Bethlehem fills all the world today;
Of Jesus’ birth and peace on earth the angels sing alway.
~
O sing a song of Nazareth, of sunny days of joy;
O sing of fragrant flowers’ breath, and of the sinless Boy.
For now the flowers of Nazareth in every heart may grow;
Now spreads the fame of His dear Name on all the winds that blow.
~
O sing a song of Galilee, of lake and woods and hill,
Of Him Who walked upon the sea and bade the waves be still.
For though like waves on Galilee, dark seas of trouble roll,
When faith has heard the Master’s Word, falls peace upon the soul.
~
O sing a song of Calvary, its glory and dismay,
Of Him Who hung upon the tree, and took our sins away.
For He Who died on Calvary is risen from the grave,
And Christ, our Lord, by Heaven adored, is mighty now to save.
~
A-men!
Posted by Thoughts on Life and Millinery. at 11:33 AM

Rainbows and church bells and beautiful hymns! So many beautiful reminders of God's promises and love.

And wisteria blossoms....wow! I know sometimes they will put out late blooms here and there. But others may be on different schedules, I don't know.

All your red and orange and green colors from Ikea are very fun; I like them. I'll have to take a look inside an Ikea store one of these days. So far I've only perused the pages of their catalog.

It's so interesting how many reminders you have there of Switzerland...

I love the brilliant colors you've selected...most apartments (like mine) are so humdrum, you really need the spice. As for the orange bathroom, my daughter and son-in-law would hug you...even their mailbox is painted orange!

I keep watching TWC for reports of your former area. I guess whatever happens, does. At least you and B. are safe and sound and together!

Your pulling together an apartment from scratch for just the two of you - doesn't that just make you feel like you're a young newly married couple?! Looks like your view is pretty good too, especially when the rainbows come out. And I just can't imagine hearing church bells ring - and not even on a Sunday.

IKEA is just a very unique store, isn't it? I love your dishes, especially those colorful side plates.

Praying for you and your two housing concerns - the one in Houston to sell and the one in SLC to buy.

So thankful you are out of Ike's way and blessed by Ikea!
I pray that your house in Houston is spared any damage...and the words of your hymn are so beautiful!!

Your 'nest' looks so like playing house!
I can't believe your cat climbed to the top of the cupboards!!

Your little apartment looks fantastic ~ every college student's dream! (obviously, I have that on my mind as Riley just set up his apartment,nothing quite as put together and cheery as yours!) The sights, the sounds, you make starting over look very appealing! I too hope your place in Texas is standing strong! Praying for the sale of your past home, and the findings of your future home. Perhaps this apartment will grow on you more than you expected, and those cats will enjoy the new heights they've found!

Are you sure you are not just listening to the mewsings and directions of a certain orange cat who craves the orange to make him feel more secure? I mean, yes, he looks good surrounded by orange, but does he realize he might blend in rather than allowing his environment to complement him? He doesn't want to just blend in does he?
Ah, well, it really is fun and I am glad you are reliving your glory days of being newly wed/in college/mommy with grown kids. Take your pick of your greatest timeperiod of life...You are there!
I love you!!!!

Jill, I love your newlywed purchases. . .so fun and invigorating picks.. .
I'm so glad you have your kitties back under your roof again.
I'm hoping your house is intact. . what utter devastation at the coast. I was thinking about your big tree that you had recently pruned to let in more light. . .I wonder how that tree is and the wooden walkways through the foresty part of your old neighborhood. .
We've thought of you so much this weekend.

I have done a little redecorating myself....I now have the top of a pine tree in my living room...lovely little thing (about 24 inches around). Guess I'll decorate it for Christmas. Also, I decided I'd let the ceiling go...and re-do that also. And my yard is just lovely - all those branches, leaves, and other stuff...Will take weeks to clean up, but I didn't have anything else to do anyway.
No power or phones at home. So I decided to come to work today instead of doing the clean-up at home - left that to Jerry (my brother).
Jill, I hope your Kingwood house is okay --- lots of terrible damage here.
However, we were not harmed, and I am very thankful for that.

It can be so much FUN to reinvent your life in a new place. So glad your visit to us in Switzerland keeps coming back to you. Yes, color is good - especially red. It will be fun to see how you evolve in SLC. Hugs, Kate