Millinery: Life behind the veil

BEEP....BEEP...BEEP: An urgent message is about to be broadcast to your viewing area.

A reader of the diamond shapes post commented yesterday that she had just discovered that her emerald shaped diamond fell out of it's setting while she was out shopping, and was lost before she noticed it. PLEASE say a prayer that somehow the stone will be found and returned to her.

And please...have your own rings checked yearly for damaged prongs. May I suggest that each year around your anniversary you have your rings checked and cleaned by a professional jeweler so your rings look great while you celebrate your special day? If you have a four prong setting you may need to have your setting checked twice a year.

It only takes a few minutes to have your diamond looked at, but searching for a lost diamond can last a lifetime.

BEEP....BEEP...BEEP......We now return you to our regularly scheduled blog.

Answer: yes and no. I did wear a veil to the meeting yesterday, but not a full face veil.

As hat maven Ruby pointed out in her book:
Do chose an eye veil if you would like to look younger. It's less matronly.

Can't go around looking matronly, now can we?
(Hey Ruby, what was that you were saying before about veils hiding wrinkles and giving an older woman new glamour? Now I am all confused.) 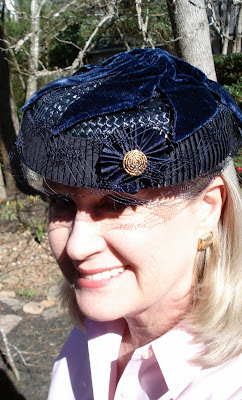 A short eye veil. I really like this veil's unusual design pattern.
One of the lovely things about veils is that they create beautiful shadow patterns upon the face.

The same happens when you wear an with open weaved wide brimmed hats. The shadow is just a subtle touch, yet a touch that I just love seeing on others. 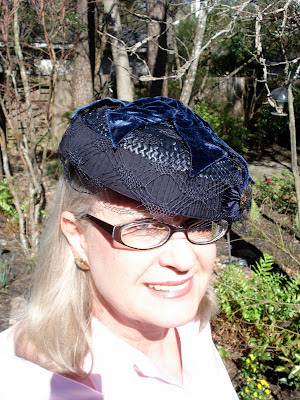 In the video "Something about a hat: Life under the Brim" milliner Nicole La Blanc points out that if you wear glasses, you still DO wear your glasses when you wear your hat.
Ditto with hats with veils.
I do think a veil is much younger looking without glasses, but then again it depends on whether you think of your glasses as hip or fuddy.
If you think your glasses are fuddy, and you don't do contacts, then get a new hip pair of glasses ASAP. 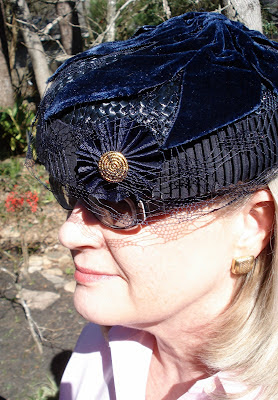 How did people react? A lady who had never spoken to me before came up to me to say how much she liked the hat and especially the veil. After the meeting another woman said she would like to come over to see my hat collections some time. I said how about this afternoon, and she said "Great!"

Now my fellow milliners are probably looking at the hat in the pictures above and saying "What the heck is that?"
That's because actually this is a tailored straw hat from the 1950's, that I've refashioned with a cockade (the little medallion with the gold button in the front) AND I have also added a navy blue whimsy on top.

The whimsy is probably also from the late 1950-early 1960's, and consists of the veiling and the navy velvet bow. The whimsy belonged to my husband's grandmother; she gave it to me years and years ago.

A whimsy is usually just veiling that is gathered into a cap shape, and may or may not be further embellished with ribbons or rhinestones, dots or flowers. They were hugely popular with Catholic church women, as they were required to wear head coverings long after the rest of the population had switched over to the bigger hairstyles of the 1960. The whimsy could be slipped on and off without disturbing the teased up hairdos. 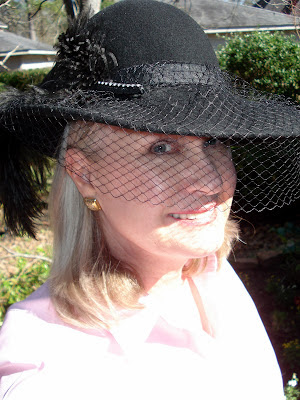 Since the little eye veil didn't "stampede the horses and scare the women and children" as the old saying goes, I might consider upping the ante to a half veil next time. 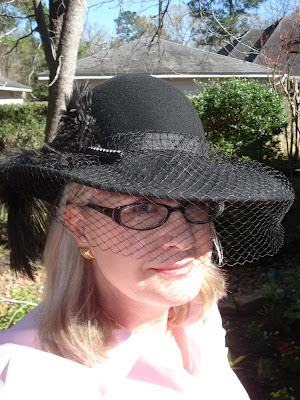 I'll probably wear this hat and veil with a black suit. That way I can gradually build up to wearing a full face veil. Sort of ease into it naturally. Ruby said " A tall woman with a large face can take a more generous veil. Coarse veiling, adorned with velvet dots or Rhinestones, is an excellent touch for late day wear."

I'm going to take that to mean that when I work the afternoon shift at ref desk at the library, I can do so with a generous veil studded with rhinestones.

I see no problem with this. Our students are studded with rhinestones all over their body. Don't ask how I know, but I discovered if it can be pierced, it can have a rhinestone. A rhinestone studded veil seems quite tame by comparison. 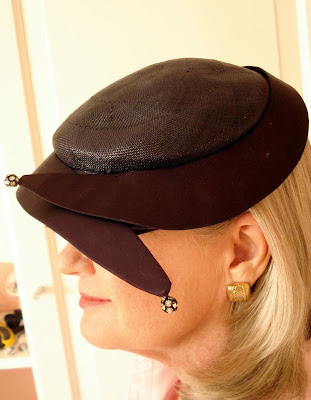 Of course not all veils are lacy. I think this hat is a great hat for adding a little mystery too. As Ruby put it:

"Your veil is a matter of illusion. Your loveliness must peep through it, not completely concealed, but touched with mystery." 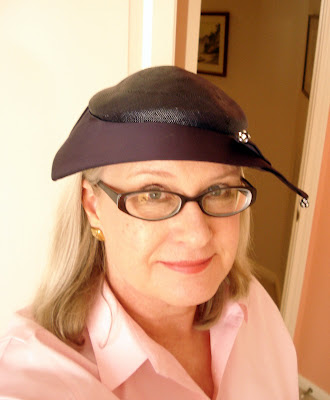 The little rhinestone ball is just the right touch for tall/large faced me, don't you think? 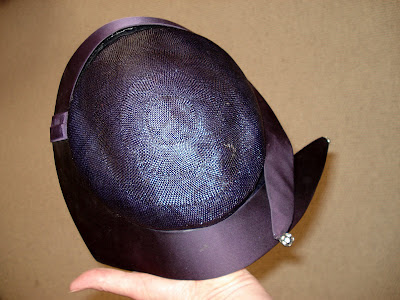 (view from the top of the hat for the milliners out there. Interesting mix of straw and satin eh?)
Now hopefully I have broken the ice for a lot of you concerning veils and their place in your wardrobe.
The fashion magazines are showing more and more veils all the time. Happily, more and more milliners are taking up veiling again. Yesterday I discovered a new blog by a milliner named Denishe in Massachusetts. She is a whiz with veils and modelled her favorite hat on her new blog
I just loved the hats she has created.
If you have a second, take a peek at some of her hats here.
If you click through the hats, you will see she has a great fresh take on veils, and will definitely inspire you to consider trying a veil for yourself.

PS: A special thanks goes out to Mad Hatter Wannabe Cristina for discovering Ruby's missive, and posting one of Ruby's patterns on her blog. Yeah for Team Millinery Spain!
Posted by Thoughts on Life and Millinery. at 4:25 PM

A little note to having your rings checked annually - my diamond was a four-prong mounted one. When I had my ring repaired, for just a little bit more, I had it converted to a 6-prong mount. It really wasn't very expensive at all. If you break one of four prongs, your stone is gone; break one of six, and it'll most likely still be there.

I love the interesting hats and the veil stories. I remember when my sister, my cousin, and I attended mass with our grandmother, who was Catholic...many years ago...and the three of us fought over the pretty veils. No one wanted the black one. Of course, that's the one I'd choose these days!

I agree Vicki. I started with a four prong, then went to six when I realized that four prongs had to be heavy and overshadowed the shape of the stone, while six prongs can be much more delicate and still get the job done.

Another FYI: Most prongs are white gold, and white gold exposed to bleach will permanently darken. Take care if you tend to clean or soak with bleach based products.

Hi, Jill. I think you look great with the veils, at any lenght. A nice flirty look. Very attractive!!! Love, Mom S

I have my prongs redone about every 10 years. I have them checked far more often. I lost one little diamond once and that cured my notcheckedness.

I love the veils. As I was reading this post I wondered if I was to live in a town where I could reinvent myself, would I wear hats and veils and be comfortable with that. I'm just wondering if living where you grew up impacts who you are.

Great post. Love the veils. They do look good with your very cool glasses.

I wonder, will we have the pleasure of making and wearing hats in the next world? If so, I hope to sit under your tutelage and get really creative with heavenly hats.

Oh so sad for the lost diamond person.

Love, what you did with up-cycling the straw hat and the whimsey. You have such amazing creative ideas. Am learning so much from you. If you don't mind, it would be neat to use that whimsey idea to up-cycle and refresh some vintage hats. So many possibilities.

Oh and add chenille bits to an old whimsey as seen on Christina's blog and away we go!

The wide brim and mid length veil look so fab on you.

Giggling about the librarian sitting at the desk late afternoon in a rhinestone studded veil … I dare you, Jill.. I think the reactions (specially from the rhinestone-pierced crowd) would make for a fascinating post !!!

I love your hat posts, Jill beautiful - both the hats and you modeling them !!

As to prongs on your rings.. I learned the hard way! I lost the center marquise diamond in my engagement ring..but miraculously found it again..the story is on my blog
http://pearlsinanutshell.blogspot.com/2007/03/lost-diamond.html