Mr. B is feeling much stronger now, and was able to drive again for the first time on Friday morning. Feeling his oats, he decided we needed a date night and proposed that we head to the mall to catch "The Bucket List."

The movie's previews had looked hilarious. The movie reviews had allowed that while the story was a bit unbelievable, the actors Morgan Freeman and Jack Nicholson were a pleasure to behold being their usual selves.

Works for me. So off we went for a 5 o'clock showing.

If you haven't seen the movie, let me just say you would be wise to be sure you have a hankie handy, and be aware that the laughs are very much there, along with some great lines, but the overall effect of the movie is much more profound than perhaps one would expect.

For those who have missed it: The plot involves two older men who wind up as room mates in a cancer ward. Nicholson plays a multi millionaire single business man atheist, Freeman plays an auto mechanic Christian family man.

They connect during their treatments, and using Nicholson's wealth, set out to do all the things that they have wanted to do before they die, which looks like will happen in about six months.

The list is what gives the movie its title: The Bucket List.
Things you want to do before you kick the bucket.

The movie has loads of great discussion potential. B. and I had a lot to talk about after seeing it, and boy do I wish there could have been a group of us seeing it together.

If you have seen the movie maybe you would like to chat with me a little about it.
For example:

How did you feel about Freeman's wife's reaction to his heading out? Was she fair? Was she right? Was he right?
What was Nicholson's real motivation in inviting Freeman to the adventure?
Did you see any symbolism in the Nepal cloud scene?

Then there is a personal response to the movie. Freeman states that 94% of all people don't want to know when they will die. If you could know, would you want to know? Would that information change the way you live your life?

During one episode of the television series "Scrubs" a woman in her 60's declines treatment. The doctor tries to talk her into having a treatment by suggesting things that she hadn't done yet in her life. It turned out that she had lived a remarkably full life, and wanted to go out smoothly, without extra-ordinary measures. She counseled the troubled doctor to go outside and enjoy the sunshine and spread out on some grass in the park. She herself was prepared to die.

Apparently she was satisfied with her life and had no additional goals for it. I'd say that is pretty unusual, but it could happen. 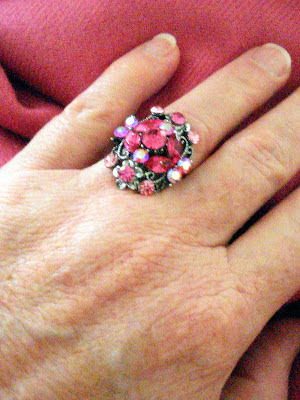 After the movie was over we walked around the mall a bit. There was a new shop opened, a place called Amuse. I was indeed amused by all the glittery baubles available for little more than pocket change.

B. leg was starting to hurt about then, so he waited outside while I bought myself some jewelry.
It would have been more fun to pretend that he took me there to buy me jewels to match my beauty (clearly a few too many romance novels have been read in my past....) but I believe I am responsible for my own happiness, so I didn't wait for him to play Prince Charming, but handed over the check card myself. 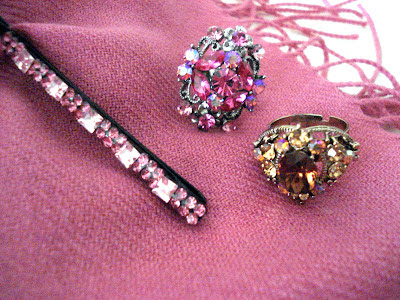 Ah yes...a chocolate diamond ring, and a pink ring to go with my new rose pink pashmina.
At $5.95 per ring (complete with the split back to make them one size fits all just like rings used to be when we were kids) these babies truly did amuse me.
As I type this, I'm wearing brown pants, a heathered brown turtleneck and that brown ring at work.
Love the bling with an otherwise plain-ish outfit.
The pin matching bobby pin hair accessory was a hoot too.
The store said the rings were sterling silver.
Yeah right....who cares!
After that we grabbed so oriental chicken and noodles at the food court and headed home.
Laura pulled up right behind us in our driveway; she was finishing her second of three days of work.
I showed her my treasures.
She rolled her eyes.
"Looks just like a Texas woman thing. Big and gaudy."
I mentioned that we looked for one for her.
She told me thanks, but no thanks. 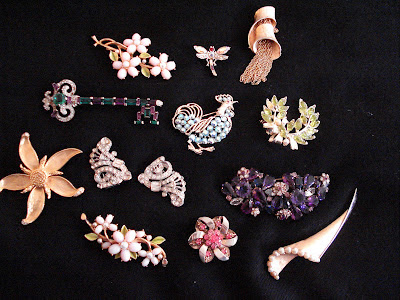 Usually I don't bother buying costume jewelry. (Said as though I usually only buy fine jewelry, sadly the truth is I usually don't buy much jewelry from either side of the aisle.) I have had four live wire grandmothers who loved costume jewelry and I can hardly find opportunity to wear what they left me as it is.
The pink pearl daisy pins in the picture above are from two different grandmothers: Bernie paternal grandmother Bessie and my paternal grandmother Fay. How random is that, that they who lived half a continent apart would own similar pins? 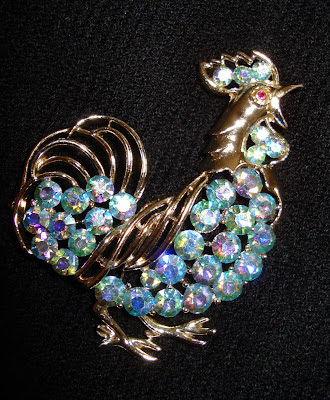 Currently this rooster is my favorite. I inherited it sans eye. I had to find a shop that sold Austrian rhinestones and replaced it myself. How fun, and how silly: An aqua colored rooster!
Every time I look at it I am amused.
And I wonder how practical Bessie ever came to possess it. 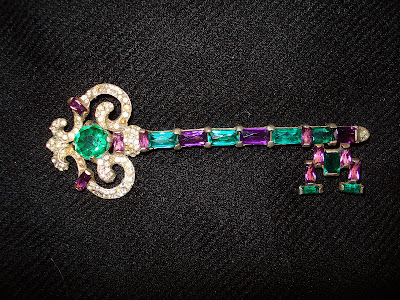 A green and purple key above and the purple bouquet below are both treasures from Fay.
It amuses me as well that none of the four grandmothers ever did anything remotely "grandmother-ish" for me.
No cookie baking, no lap sitting, no rocking or walking or any of that stuff.
They were way too busy living the own active lives. 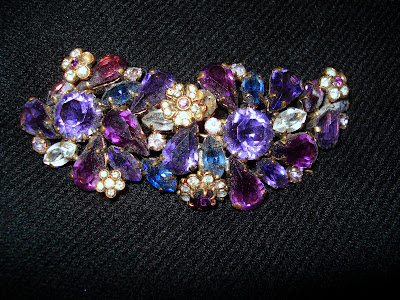 Today I read Dawn's Friday post concerning a pin that she owns that belongs to an aunt.
It reminded me of how often it happens that when I wear one of my grandmother's pins, I get asked about the pin.
I usually wind up telling the person a little bit about the grandmother who owned the pin.
It occurred to me that the pins have probably generated more inquiry into the lives of my grandmothers than their memorial markers ever have.
Those somber polished bits that give a name, a birth date and a death date and a title do nothing to communicate personality the way that the pins do.
Isn't that funny. A bit of bling winds up being the symbols of four lives.
I wonder if any of them would ever have imagined such a thing.
I made a note to myself.
Buy more bling.
Live more bling.
Live a life that has sparkle.
Someday someone may ask someone about my ring from Amuse.
I hope when I and my ring are discussed, people will be inspired.
But I also hope that they will be amused.
And I hope that my "bucket list" accomplishments will be worthy of my time here on earth, and be as bold and sparkling as ever can be.
Posted by Thoughts on Life and Millinery. at 8:35 AM

This post has an overabundance of things to think about. Hmmmmm. My brain is hurting.

However, I do know that one thing I will be before I die is a world traveler.
I also want to live with no regrets. I want to lay peacefully on my death bed, breathe easy knowing there was nothing I would significantly change. (I know there's always little things we'd change, but as a whole, be happy with the big things/milestones/experiences.)

I love bling.
Now if only we could get you loving shoes as much as the bling!

Oh, and thanks for the shoes offer, but my feet are 7 1/2- 8 so I think the gorgeous suede will not be able to fly over to me. Sigh.

Oh.. Jill ! a great post !
I haven't seen the movie but when I do -- and you have made me want to see it- although I will probably just rent it -- I would be happy to discuss it with you.
Would I want to know when I was going to die?
Right now? no... but if I was terminally ill I would want to know what the doctor's prognosis was.

I love your jewelry , Jill, and how nice to have such pretty pieces from your grandmothers. I have a peridot ring that was my grandmother's but other than that I don't have any .
And your rose pashmina scarf? I have one identical to it !!!

Glad you got B out for a date.
We haven't seen the bucket list yet but it's on our bucket list.

Your baubles are a delight. After reading Dawns post myself I went to pull out the butterfly pin that was my moms. I too wonder what the few sentences will be about me.

I love the baubles! This was such a fun post, and it just reinforces my desire to see the movie (our local paper's critic disliked the movie!).

Hooray for Mr. B getting up and out on that leg! Doc is slowly regaining range of motion in his arm, too.

May all our lives be filled with Sparkle!

Loved this post, the "gems", and the comment you left at my place about my aunt's butterfly pin...

Your purple pin makes me think of my grandmother. She would have loved that one.

Your newly acquired bling is very pretty. I love sparkling things! I often have to stop myself from buying sparkling clothing....

Yes, I would want to know if I was dying and when. I don't know what I would do with the time left; I can imagine, but you don't really know something like that until it happens to you. I imagine I would go someplace where one can see the stars in all their magnificence at night, a place of real beauty, and spend time praising God for the wonders of His creation.

Thanks for the Bucket List recommendation....we just might go see that one. If we do, I'll take you up on those questions.