Blessed art Thou, O Lord our God, King of the universe, who has given us holidays, customs, and times of happiness, in increase the knowledge of God and to build us up in our most holy faith.

Blessed art Thou, O Lord our God, King of the universe, who performed miracles for our spiritual fathers in those days at this season. 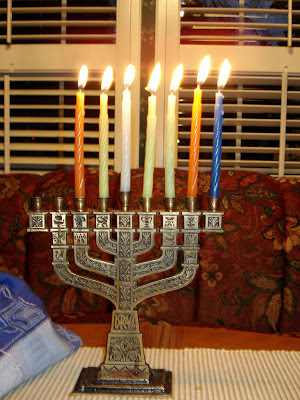 As we come to know Messiah, we are to be a source of light for the world. Jesus the King, our Messiah tells us in Matthew 5:14-16

You are the light of the world. A city set on a hill cannot be hidden. Nor do men light a lamp and put it under the peck-measure (a basket) but on a lampstand; and it gives light to all who are in the house.

Let your light shine before men in such a way that they may see your good works, and glorify you Father who is in heaven. 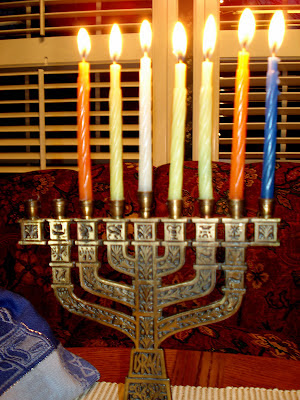 I find those scripture to be absolutely daunting. Jesus says "I am the Light of the World" and I cheer in agreement.

Then He says: "You (that would be me...gulp...) are the light of the world....and I feel unworthy.
I feel like I am pretty dim light.
Light to the world? Let me confess something here: I'm not sure my good works could light up a broom closet, let alone the world. 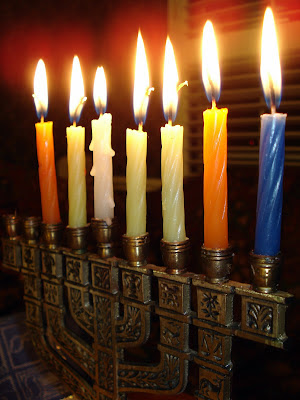 I usually feel like when I have done something that *might* glorify God, it is pretty small, and not very noticeable at best. (Of course the opposite is true: if I do something rotten, everyone and their dog is watching, and pointing out how God's kid blew it. Or at least that is how I usually feel.)

How can I be light to the world?

The reason why Hanukkah includes the lighting of candles for eight days is because of the miracle that happened when the faithful Jews re-entered the defiled temple, and re-lit the Temple's lamp.

The reason why the Maccabees were so eager to relight the lamp (a seven branched lamp called a Menorah; anytime you see the word Candlestick mentioned in the Bible, it usually means the Temple Menorah) was because the Scriptures had commanded that the Menorah light burn continuously in both the Tabernacle and then later on, in the Temple as a symbol of God's presence.

The seven branched Menorah was the only light in the Temple, and it was lit by olive oil. 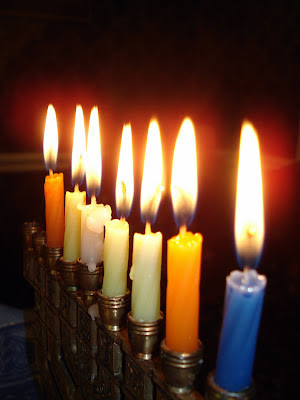 They wanted to relight the light, but they had a little problem: All the oil that had been made to burn in the Menorah had been contaminated by the Greeks, except for one hidden bottle. The amount of oil in that one bottle would burn only for one night.

The Maccabees knew that it would take eight days to make more oil.

Should they wait until they had enough to assure a continual supply, or just light the one bottle?

As I said above, the temple Menorah burned olive oil. A while ago I found a write up about how olive oil is made, written by a Jewish believer named Ephraim Frank, who lives in Israel, and who himself makes olive oil.

I'm going to summarize what he wrote about the process of making olive oil, and at the end of this you will find a link that will take you directly to his writing.

First of all, a few random observations about olives and olive trees:

The olive tree is evergreen and very beautiful when full of ripe olives.
Some olive trees live to be a thousand years old, or longer.

The dove brought an olive branch to the ark.

Christ prayed in the Olive Garden, where he sweated drops of blood.

Christ ascended and will descend back to earth on the Mount of Olives.

Oil is a symbol of the Holy Spirit, and is put upon anything that is to be set aside for God's use.

God says that the coming judgement of the world will be like the shaking of the olive tree (Isaiah 24:13) 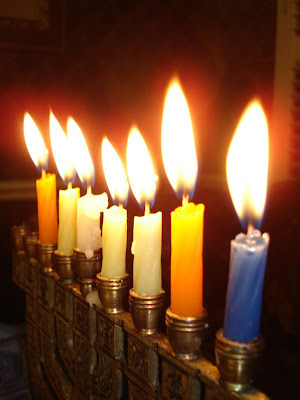 Franks noted that the olive itself is quite lovely to look at. However, if you were to pluck a ripe olive and place it in your mouth to eat, you would immediately want to spit it out. That's because unrefined olives have a disgusting bitter taste.

I know that if you try to burn one right off the tree, all you would get is a lot of smoke and soot.

In order for the bitter olive on a tree to be transformed to pure golden oil that can be burned to make light, several things have to happen: 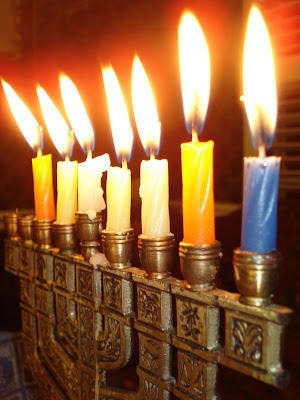 1. In order to get the olives in the first place, the olive tree is beaten and shaken. This causes the olives to be released from their original state.

2. The olives are then gathered and taken to what is called a pressing house where the olives are dumped into a large mound or "Mount of Olives".

3.The olives are then immersed into water to clean them from the world's dust and dirt.

4. Next the cleansed olives are put under pressure, until they are crushed. The olive flesh and oil are still mixed, but the fluid which runs from the olive looks exactly like blood.

5. The crushed olives are then sifted and filtered, finer and finer.

6. The oil, murky at this point, is put into a container, and the olive's flesh is tossed away, or used as animal
fodder.

7. The murky oil then "rests", which allows the residue of the flesh to settle, allowing the oil to become pure and clear; (any remaining bits of flesh will cause a smoke when the oil is burned, and will blacken the area with soot.)

8. At this point individual olives are no longer visible. The flesh is gone, all that is left is the oil, which can be used to
produce light.

9. One more thing is needed for the oil to be used for illumination: it must be set on fire.

How can I be like olive oil lit by the fire of the Holy Spirit? 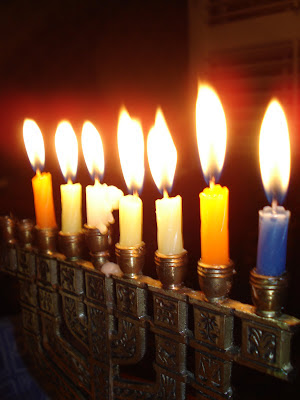 I must first be shaken free of the worldly place, and then gathered to a place where I will be immersed (baptised/mikvah)

The refining process becomes more and more exacting until at last the flesh is no longer a consideration, but rather only the spirit.

Then there is rest. The weekly time of reflection when any sediment from the experience of life are allowed to settle.

Then at last the Holy Spirit can kindle me, and I can be pure light for God.

I really want to be light that is pure, light uncontaminated by ungodly philosophies and ways.
Light that doesn't cause smoke and soot because it is free of fleshly ways.

I want to be kindled by the Holy Spirit to be a Light unto the World.

And I want to be like the Maccabees who when they saw that there was only enough oil for one day, they lighted it anyway, trusting God for the next day and the next...

And the light did stay lit, for eight days and nights.

It was the miracle that we celebrate each time we light candles for eight days.

A celebation which reminds me to believe in miracles.

And to risk being light. 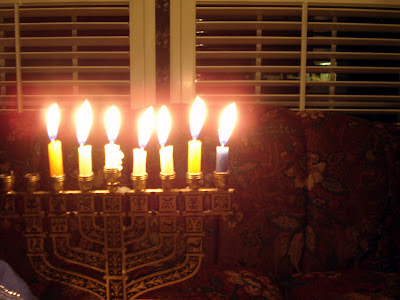 Mr. Frank's article links here.
The chanankiah in tonight's picture was obtained in Jerusalem by Bernie when he visited there in 1974. It is in the shape of menorah, seven branches, and then an additional candle cup has been added on each side to make it usuable for Hanukkah. The symbols of the twelve tribes of Israel are carved upon the branches.
~~~
No Hanukkah would be complete without asking friends to come for dinner at least one night.
Tomorrow night I'm making the traditional Hannukah latkas!
Vicki, Sara, Amy, Lovella (and all of you who have been reading along but I don't know your name...)
You are invited to join me here on my blog tomorrow right after sunset.
I'll be cooking, and you can stand around the stove and watch as I cook, listen to some music and maybe even dance a little.
Then we'll light the candles together and eat!
Posted by Thoughts on Life and Millinery. at 1:35 PM

And what a lovely invitation to enjoy some traditional latkes! Can you believe I've never had any? I'll be there, along with Lovella and Julie and all the others, celebrating.

This was indeed a beautiful post. I want to have my light shine too.
I would be honored to sit along with the others . .thank you.

I've never had a real latke either.

This was a beautiful post, Jill! I really appreciate the explanation of the refining process. We, too, need to be similarly refined so that we are able to show - and light! - our fire for God.

It has been too long since I've enjoyed latkes...I would be honored to be your guest and celebrate with the rest of your blog-friends. Thank you.