Is this thing just playin' with my head?

A pretty picture from a walk I took awhile ago, because it probably isn't polite to jump right in with what I really want to know. 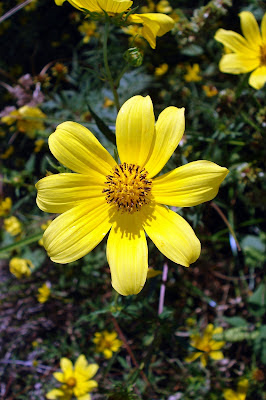 Now what I want to know.
Below: Same spider from an earlier post, now with a different look. 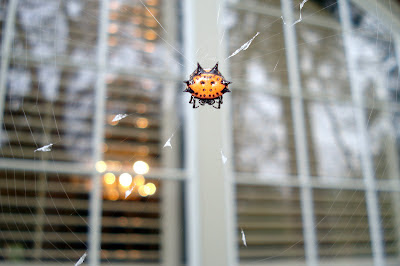 Seriously, the thing has turned orange. Remember when it was white?
At one point we had five of them hanging around our yard.
This morning there are only two, one is white and this one has turned orange.
I realize that it is a neighborhood tradition to decorate for Halloween, but as Christian folk, we just don't go there.
This spider had better be thinking "Autumn" and not "Celebrating All Things Evil" if it wants to keep hanging around outside our window.
Oh wait...I just remembered a sermon I heard about this. It's about the theologically view that only man fell from grace and thereby man lost relationship with God, and can sin.
God's creatures didn't rebel, didn't lose relation with God and can't sin.
Or at least that was what one speaker proposed.
So I'm going with the spider is doing what it God intended.
You go Spider! 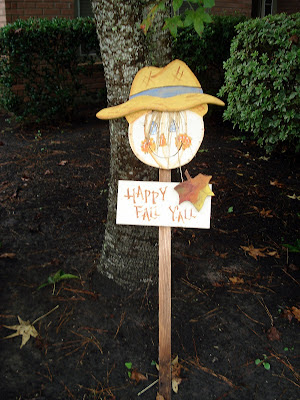 This year the neighborhood has lightened up a lot with the Halloween theme decor. There are a few graveyards on the lawns, and a ghost/goblin/monster spider here and there.
I'm totally unclear why people bother buying monster spiders (made in China, forcryinoutloud..) when all they really need to do is take a short walk through the woods.
Monster spiders...everywhere.

Doesn't that sound cheery?
It's fun to say.

Much cuter than "Happy Autumn, eh?"

Or at least I think so. 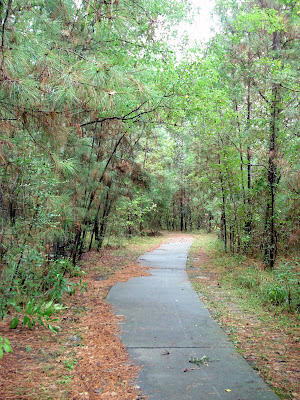 Yesterday afternoon around three we had a massive storm. It got so dark outside all the photosensitive lights popped on, and the Weather Channel had the red scroll eep...eep...eeping along, warning me to take cover NOW!
(Yes, in CAPITAL letters and EXCLAMATION POINT!!!!)
So I went outside to take a picture.
The picture didn't do the storm justice, but we did get a couple of inches of rain.
And the temperature dropped. Oh Thank you GOD ON HIGH...the temperature dropped!
I wore a long sleeved tee shirt just to celebrate.

This morning I knew the ground would be way too wet to take my usual morning trek through the woods on the dirt path. I live in such a privileged neighborhood that I have not only dirt paths through the woods, but also paved alternative paths. Some 74 miles of paved paths to choose from.
They are neatly swept and groomed for biking and skating and such. 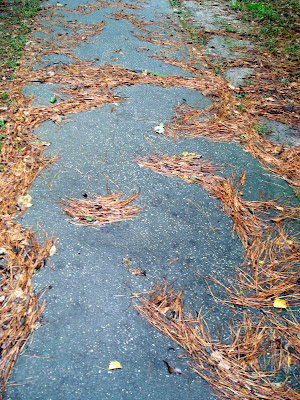 This morning I walked on pine needle carpets, and could see where the water had flowed on the path. 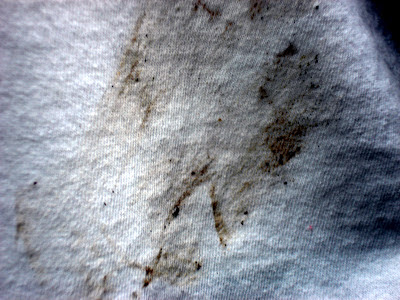 Along the way a doberman pincher galloped up to me. Not all scary stuff comes from China around here; sometime you can be terrorized by local pets.
The dog's owner came around the bend before the the dog reached me, calling the dog and assuring me that the dog was friendly.

She was walking a younger Dobie, with the straightest ears I had ever seen. Freshly styled ears I imagined. While the owner was going on about how friendly her dogs were, the younger one on the leash jumped up and planted her muddy paws on my tee shirt.

The owner continued to smile and rejoice over how friendly her dogs are, then they hurried away.

Yes, I think the guy was right. Animals do not sin. Paw prints on a clean white shirt: Not wrong.
I do so hope I can invite the dog's owner over sometime soon, especially if I can run into her while she is wearing something black.

My cats are really friendly too, you know.

If the cats slimes her with orange and grey cat hair...well, these things happen, right? 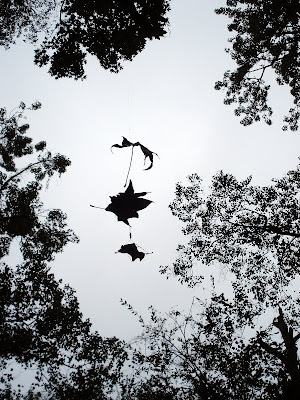 The rain had torn apart many of the overhead spider webs. The webs were still strong and sticky enough to catch and hold leaves as they fell from the trees.
Above: Seen overhead, a miraculous leaf mobile design, dancing in the sky, custom made just this morning. 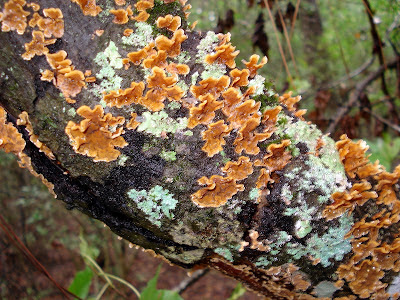 Lots of dead wood had come down. The presence of moss is always a tip that the tree is on its way out.
Moss gathers on that which is dead, yet I still find moss to be beautiful.
Thanks for taking another walk with me.
Hope you enjoyed it as much as I did.
And just think, you don't even have to go wash your shirt like I do!
Posted by Thoughts on Life and Millinery. at 8:08 AM

loved to have joined you for the storm watching and walk through the changes..I know how much you needed a good rain storm

What a beautiful walk and no dog prints. Can't beat that. Isn't Fall a beautiful time of the year to get outdoors?

Storms can be wonderful! We don't get many of them around here - sigh!

That spider is amazing! He's just doing his spider thing . . . even if it does look like he's wearing a Halloween costume!

Hey, Jill! I really enjoyed my walk with you today! Your narrative made me smile!

Rushing outside during a severe storm warning sounds familiar. When Hurricane Charley attacked us a few years ago and damaged our home and neighborhood, Doc and his buddy were standing outside in the worst of it. I could only imagine a large tree limb flying through the air toward them...

Oh I do wish I could have been there. A storm and a walk . ..I do have black t shirts.

Your photos were really beautiful today, even the spider and yuor humor had me in smiles.
Thank you.