I just HATE to give up.
Even when it is time to just cut my loses, I still hang in there, fighting to salvage something of an "in for a penny, in for a pound" situation.

The four yards of blue cotton gingham that I had sewn into a potato sack shaped dress was draped over the back of a chair this morning, just snickering at me.
I HAD to do something.
I just couldn't let it beat me. 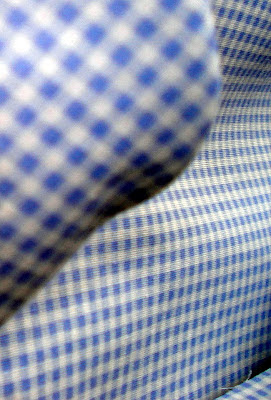 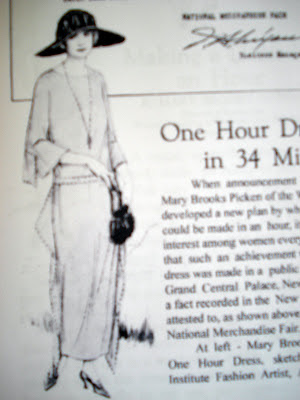 Using the basic pieces that I had sewn to (almost) make the above dress, I took the skirt off the top, split the top in the front, whipped up an apron and TA DA! I now had spent almost six hours more of my time to make this fetching costume:

Would anyone care to join me for tea? 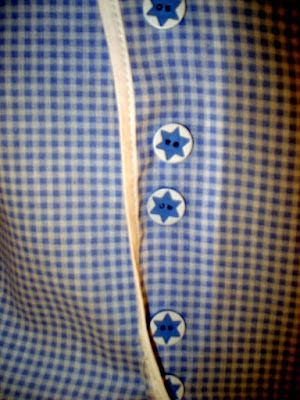 I just love these cute little buttons!
I know, you aren't supposed to sew a button on without actually making a button hole, but I was going for concept, not perfection.
No pattern, just my imagination.
It was my own little version of Project Runway!
Sans glam!

Oh come on..stop laughing. I think it turned out kinda cute...kind of 1910sh.
Just because it make me look as big as a house is no reason not to love it.

The best part of the whole adventure was having Bernie around to keep me in stitches.
He really does loathe gingham.
When he first wandered in to my sewing room to see what I was up to I knew exactly what he was going to say:
"Ugh, it looks like something a prairie settler would wear."
Which is funny because prairie women all wore corsets. I think he is thinking of the blue gingham dress that the character Laurie wore in the movie "Oklahoma!"

Then he remarked the (again) how much he dislikes gingham.
I was pretty sure that if Iasked, he would say because it reminded him of the shapeless old Mormon women of his childhood, who sewed poorly constructed garments out of the cheap gingham fabrics.

So I asked.
Surprise, surprise, that was exactly why he dislikes gingham.
Seems like a reasonable reason to dislike the stuff.

Just for fun, I asked him how he would feel about me adding some rickrack to the top.

Shaving my head, rickrack and my getting a sex change operation all have equal appeal to Bernie.
Which is to say AAAGGGGhhhhhhh....NOOOOOOOOO!

I promised I wouldn't add rickrack.
At that point he spouted off with a great little encouraging routine that had me laughing hysterically:

"Oh no, go right ahead. Add rickrack, add some lace, add some ribbons, add some buttons, LOTS of button, add some veiling, add all that sh--- (he used a naughty word here), it will look great! More sh--, that's the ticket!

(I'm still laughing...left to my own devises and with unlimited time and money, I will keep adding sh-- to hats, cats, dresses, ANYTHING that hesitates for a split second. I have really done a great job reining that impulse in, and it only peeks out from time to time. And my eyes roll when I see women who have never said no to an additional do dad or lace scrap on a sweatshirt or toilet seat cover. I'm sure you know the type.)
Well, it wasn't a total waste of a day. I love tea parties, and now I have a cute little summer tea party dress.
(Somebody, quick, ask me over for a 1910 tea party!)

And actually the top is going to be a something I will be wearing.
I've been looking for a way to make a light cover up for my sleeveless dresses and tank tops, in a fast design that I can whip in in nothing flat. The top part of the One Hour Dress pattern will work, either sewn shut or left open.
I'll probably make the sleeves a little tighter next time.
So the day was not a complete loss.

I did not quit, and I think I actually won.

(Over fifty knees showing..take that Ellen!)

Hi Jeff! Hi Laura! Bring someone home you'd like to marry really soon! I'll serve tea and we can all get to know each other!
It'll be fun!
(I am laughing so hard I am crying...Jeff, Laura, I'm kidding, really! I promise! Don't call the home quite yet!)
Posted by Thoughts on Life and Millinery. at 5:04 PM

I really wish I could have spent the day with you!!! It would have been more fun than I have had in a long time!!! smile

HAHA Jill you're so funny! Yikes, just what I asked for on the last post, and VOILA it's here. (i have you on my rss feeds so I didn't even see that you had in fact answered my request already as I wrote my last comment. oops) I'm not sure that type of dress is my type. I guess b/c I have the opposite body type than you. :)

Oh my goodness, what a sport you are. It would have been worth the plane ticket to be a fly on the wall with Bernie going on and on.

i think that the top looks very nice with the white.
About sewing on buttons with no buttonholes, I've done it numerous times, so it must be a thing to do.

If I wasn't babysitting my grandpup this evening, I'd be over for tea . .really.

Hmmmmmmmmmmm not your best look, Jill, but GOOD for you for pursuing the project and learning something from it. For your summer top it reminds me of a shrug project I made from a Threads mag article. You might want to look at that at the library Summer 2005, I think. Cute and easy. I've made 4 of them and love 'em for evening wraps. One is faux fur and I wore it to a wedding in the Fall.

As for rickrack I LOVE rickrack tho' can't say I've used it much. Bought a bag of blue rickrack at the Salvation Army here for a few francs. Think I'll make a hat and put it all over the hat. Take that, Bernie! (tee hee hee).

Best of all you're having fun with the sewing. K Q:-)

I don't know if I can roll my eyes any harder. Did you guys hear me up there in Canada? Maybe in Texas too? It was quite a loud groan. I think I woke up all my patients. I still love you and will always love you no matter how much rick-rack and buttons and ***shudder*** polka-dots you don. Just don't think you will get to add any decorations to my own house. Jeff's, fine! But not mine! I think Tiggie needs a bit of lace...

While I was babysitting Tobee my grandpup, he kept whining and I kept looking out the window and asking him what he was hearing, now it all makes sense, with the good hearing and all, it must have been Laura. What fun.
I'm working on my summer frock and needed a break, and another smile, and now I'll head back to my sewing.

Here's a bit of worthless trivia --there are gingham dresses in "Carousel" and "South Pacific," too. I wonder what it is about 1950's musicals and gingham. Perhaps if you sing while wearing the dress you will get a call from Rodgers and Hamerstein. Well, probably not.