Courting in the parlor.

Looking for a little romance?

Back at the turn of the century (1890-1910) there was a popular invention called the stereoscope.

Pictures were taken in a manner that when viewed using a stereoscope, the pictures became 3 dimensional.

Picture of events and places were very popular, the original "arm chair traveler" concept.
One photographer, Ingersoll, took pictures of people in scenes, and then added a story to be read along with the picture as it was viewed.

Now here's where it gets romantic:
One person would look through the stereoscope at the image on the front of the card, while the other would read aloud the story printed on the back of the card.

A perfectly proper reason to get close together on the loveseat in the parlor.

And if the stories were a little romantic, well,

"Hey, ya wanna come over to my place? I got some new stereoptican slides! Uh huh... OK!
See you later then!"

And here they are for your romantic Valentine's Day viewing!
(Click on the pictures to enlarge the script if needed.) 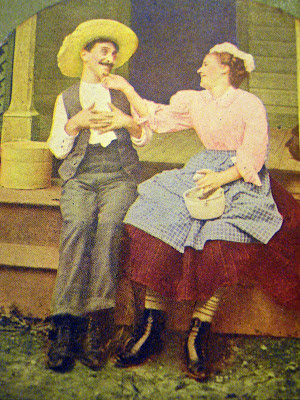 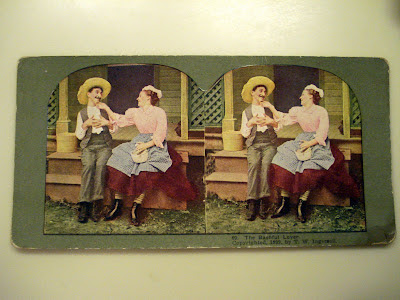 No Date: "Caught in the Glen Ramble." 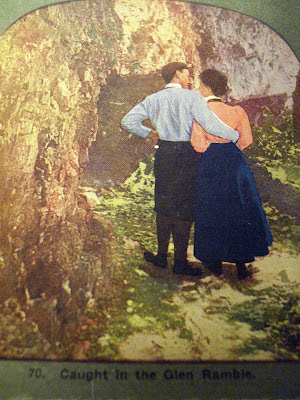 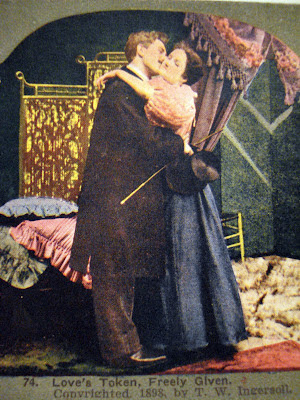 The course of true love is rarely smooth. A disagreement or two along the way is to be expected. These two will need to do some soul searching, and a little making up as well. 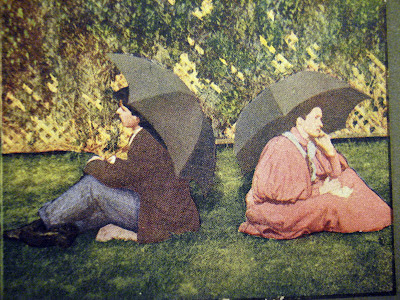 Hopefully Cupid's arrow won't be misfired in your romance today. If it is, just go ahead and make up anyway. It could be very romantic! 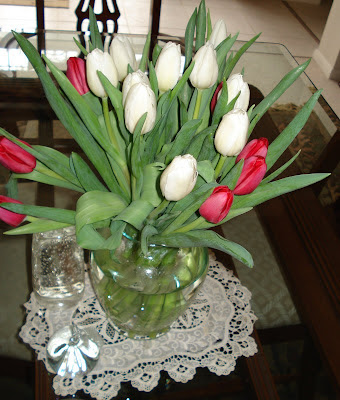 Tulips from my darlin' Mr. B.

I hope you have a Happiest of Valentine's Days.
Posted by Thoughts on Life and Millinery. at 9:40 AM

Oh I'm particularly found of #70. It made me sigh. I find it quite interesting that the last one still rings true today.
It looks like your darlin' Mr. B is off to a wonderful start for your day. Have a wonderful day my friend from the south.

Beautiful tulips, and a lovely reminder of days gone by. It is amazing that no matter how fancy-schmancy (sp?), and technologically advance we've become, we still love the attention and affection of the simplist acts - small bouquets. The dance of courtship is still exciting, mysterious, and adventuresome. Thanks for sharing the slides! They are in fantastic shape! What a treasure!