When Irish skies are smiling...

From: http://www.spaceweather.com/
NORTHERN LIGHTS: Will the sky turn green for St. Patrick's Day? It could happen around the Arctic Circle. A solar wind stream is buffeting Earth's magnetic field and causing displays like this: "This green corona lit up the night sky sky over the weekend," reports photographer Fredrik Broms of Kvaløya, Norway. "It was absolutely breathtaking--and the best may be yet to come!"
He's right. A coronal mass ejection (CME) is heading toward Earth and it could spark strong geomagnetic activity when it arrives on March 17th or 18th. High-latitude sky watchers should be alert for auroras.
OK, grab your cold weather gear and cameras. Get into your car, and start driving north. Let's get some great blog pictures of this!
Posted by Thoughts on Life and Millinery. at 10:55 AM 6 comments: 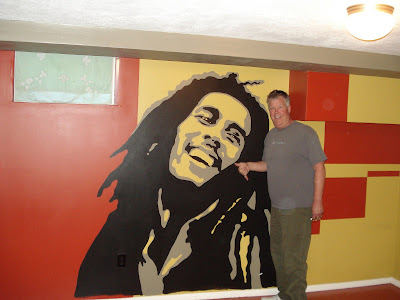 Bob Marley was a vibrant presence in my work room at one point.
The other three walls were painted the shade of gray in the line above Bob.
It was such a dark and dreary room to be in, even with Bob's infectious grin.
When we were looking at houses to buy, we called this entire house "The Marley House" as it was the easiest way to distinguish it from all the other houses we looked at.
(Thank heaven there WAS only one house with such a unique identifier. I would have been seriously troubled if there had been several houses with laughing Bobs on the wall.) 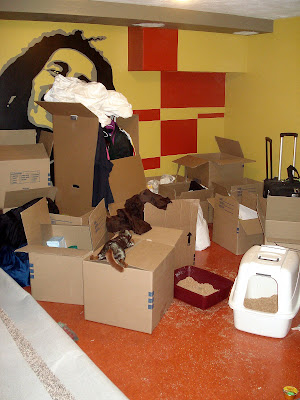 After we acquired the house we used the room to stack moving boxes. For several months the room was stacked to the ceiling with boxes; small passages allowed for precarious movement through the room.
This picture was taken on the glorious day that there was at last no boxes towering above our heads, and the orange floor tiles could be seen again at last.
Bob still chuckled at us each time we entered the room.
The other gray walls still dispelled any cheer from the space.
The one tiny north facing window did little to shed light in the basement room.
Shutting the door allowed us to live by the motto "Out of sight, out of mind" for a few more month.
At last Bernie could no longer handle sharing a house with Bob.
While I was away, he painted the room a pale off white, wincing and feeling a bit sick as he rolled the paint over Bob's eyes. 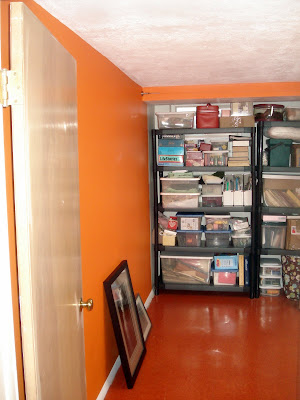 The orange red floor tiles: We debated re-tiling the room. We just couldn't decide what we would like to do differently. It was to be a work room; carpeting was out as I am well known for my ability to strategically drop pins and needles into carpeting to await opportunities to assault Bernie's bare feet. Tile would give him a fighting chance of avoiding both pins and bloodshed. 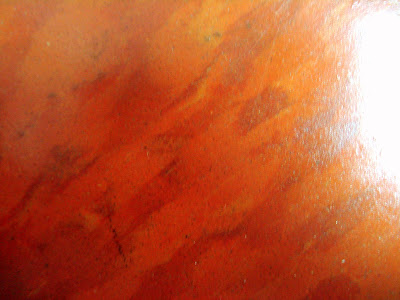 (With this patterned tile, even if he did get stabbed by a wayward pin, you would hardly see any bloodstains on the tile anyway!)

Lately I have been noticing how many television sets, movie scenes and houses have been sporting orange walls to good effect. My drug of choice, IKEA, had room walls painted orange.

My favorite television show NCIS is shot in a room with orange on every wall. I just love how it looks on the show.

(I'm still laughing that one dear friend, who is totally addicted to the show, said that she hadn't noticed the shows color scheme when I mentioned it as an inspiration for my room. Bet she notices it when she watches the show now!) 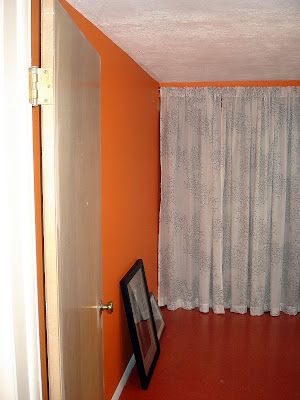 A trip to the paint store for several orange paint samples, and I set about pondering the perfect orange shade. (Painting/decorating tip: Grab several paint chips of each color, and tape them up together as a larger square. Much easier than buying the paint and painting up a sample square big enough to imagine the paint color on an entire wall.)

A deeper red orange drew me emotionally, but in the end the brighter orange that contrasted a bit with the floor allowed the floor to become a secondary feature instead of a floor-to-ceiling color element.

(Update: How about this little factoid: The color orange is associated with joy, according to the internets. And it also stimulates mental activity and increases the oxygen supply to the brain. Isn't that just perfect for a work room space?) 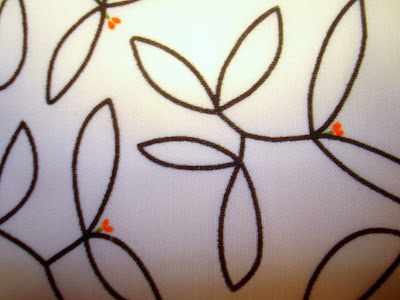 Three walls got painted orange, and one of those walls was covered with an IKEA fabric (above) curtain that sported just a tiny touch of orange. It took me an hour to dither about my selection at the store, going from yellow striped to navy stripes to solid white to finally this curtain.

What on earth took me so long? Of course this was the perfect choice! 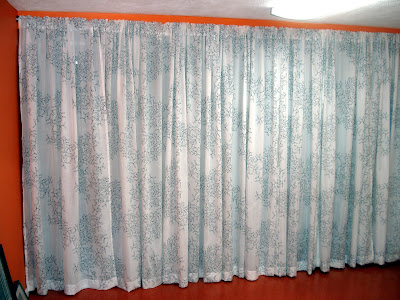 There now...isn't that much nicer than looking a wall of art/sewing/crafts/games etc etc?
Everything is still at my fingertips; the curtains are light and panels open every three feet for easy access to the shelving.
I found a tension wire drapery hanger at IKEA; it is really functional as the wire is just slightly bigger than a pencil lead, and the fabric slides on it easily. Bernie was impressed; no middle support feature is necessary to keep the drapery header even. 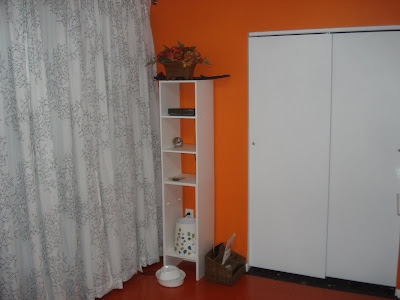 The closet has a wire drawer unit inside and seasonal clothing storage.
The white storage unit is just there for now. 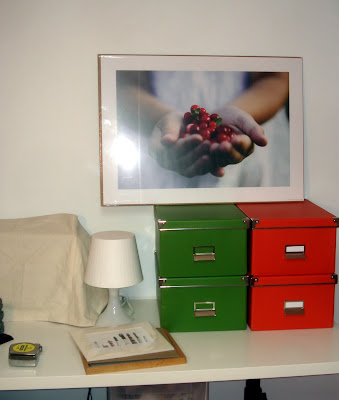 Shelving still needs to be installed. I have some framing yet to do, and a black rolling desk chair to purchase.
The brightly colored storage boxes will hold miscellaneous items on the open shelves.
Bernie will be sharing the space for fly-tying and odd projects now and then.
I imagine we will have a lot of fun being creative in the room in the future.
As I declared in the post title, the room is about three quarters of the way done.
When it is completely finished I plan to have a launch party, just like I did for the grand opening of my pink painted hat room in Houston.
For that event I served pink champagne.
For this one, I'm thinking of a blood orange sparkling cocktail, with a blackberry speared on thyme for a swizzle stick.
Various orange colored treats will be served.
And I'll invite guests with a suggestion to wear orange trimmed black cocktail hats with a modern vibe.
I'll be sure to post a "Save the Date" as the time draws near.
I do hope you will plan to attend, either in person or via a virtual appearance!
Posted by Thoughts on Life and Millinery. at 10:04 AM 8 comments: 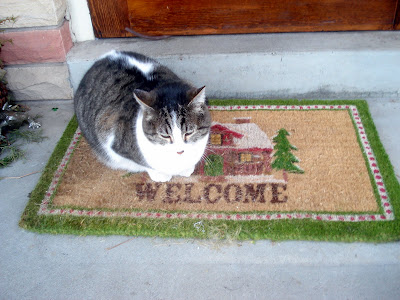 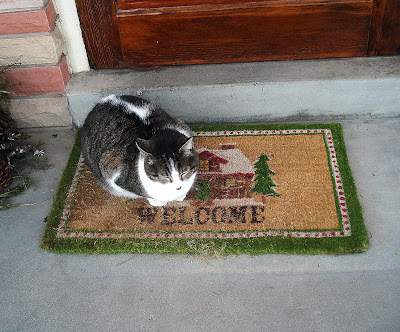 Four inches of snow had fallen about us.
She patiently camped out on our cosy and snow free welcome mat and waited for us to be hospitable.
We weren't.
We were on the way to church.
I've heard that some folks think that all Christians are hypocrites.
I guess I'm confessing here: On Sunday we too were hypocrites.
We didn't mean what we said on the door mat.
At least not for cats.
We bid her Good Cheer and drove off in our warm heated car. 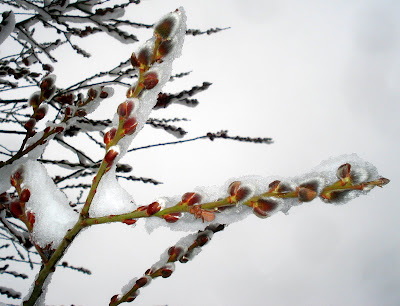 Other pussy types were also found on our street. They too were burden with the shift in weather. The warm temps had said "Welcome Spring!" but the truth was it is still winter.

As a poem I read put it:

March I hate you

You are holding hands with spring

But you are married to winter. 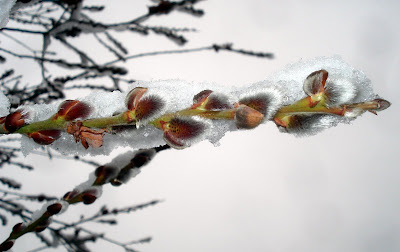 Hypocritical March had deal cruelly to the pussy willows as well. 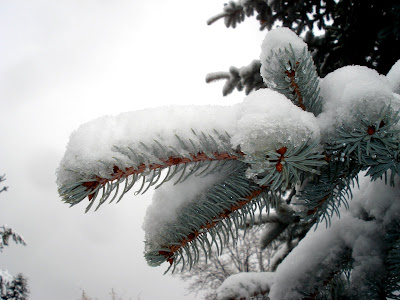 Pussy cats, pussy willows and fir trees alike were confronted with the truth: Yes, it is still winter.

Wearing white: isn't that a summer fashion?
No, wearing white is a winter thing around here. 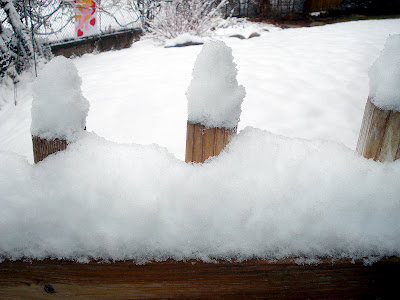 Fluffy caps top the fence; these are not to be confused with the lovely bonnets of spring. 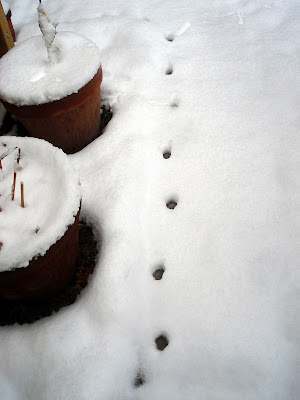 Missy had visited via a walk through the snow.

What a long cold walk she had on her way to visit such a heartless neighbor! 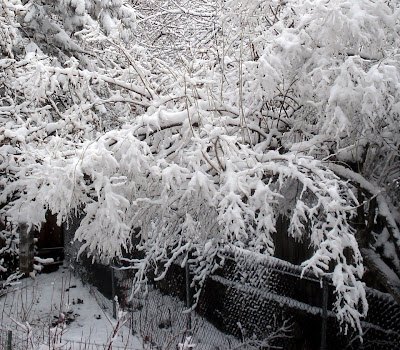 Confessions: Secretly, I'm not ready for spring. I haven't had my fill of winter artistry yet. 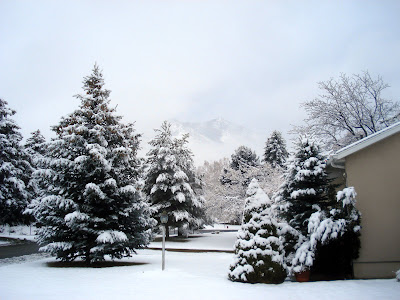 The view from the end of the street across the valley to the snow covered mountains: I'm in no hurry to see the mountains bare once again. 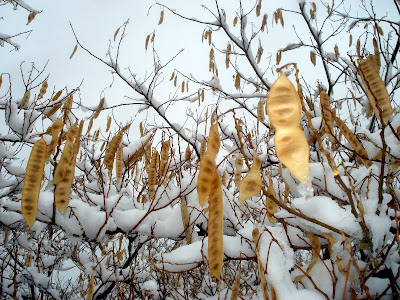 Seeds can wait to sprout. 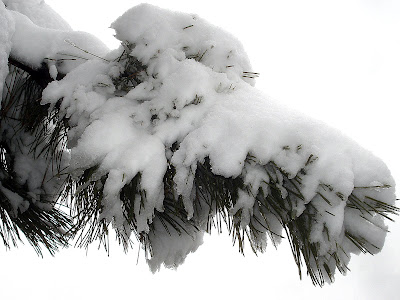 Branches heavy with snow can stay. 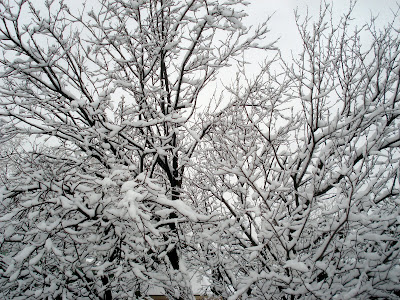 My view from the kitchen window can remain a study in black and white.
I can rejoice in this day of winter.
A day which proved to be just as hypocritical as I am; for five hours later all the snow was gone.
The weatherman says it will be warm on Monday.
Spring will flirt with me, but I know the truth.
We still have six more days of winter to go.
And that is only reckoning by the calendar.
Who knows what seasonal displays are yet to be enjoyed between now and the rest of the month?
Oh March.
You are such a tease.
Posted by Thoughts on Life and Millinery. at 9:12 PM 8 comments: