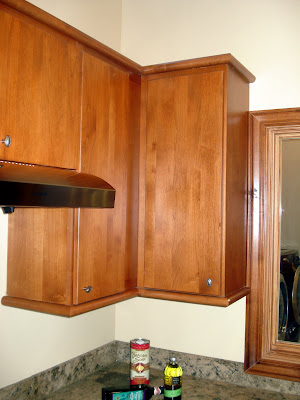 Mid Century (or what normal people call "The 50's") kitchen cabinets usually were a simple slab style of door, if the cabinets were made of wood, such as seen in the picture above.

Often the cabinets were either painted, or birch or a knotty pine.

I have spent two months looking at various styles of kitchen cabinets now, and as I looked I reminding myself of these facts:

A slab door is 1.) the least expensive option 2.) easiest to keep clean 3.) keeps within the style of the house's era. 4.) can be dress it up with hardware.

The "easiest to keep clean" fact speak especially loudly to me.

For the past eight years I have daily dealt with cream colored cabinets that showed newsprint smeared fingerprints and coffee drips from blurry eyed breakfast preparations. The raised panels called for never ending gyrations of spritz and wipe moves on my part to keep the kitchen looking clean.

I swore I would NEVER have raised panel cabinet doors in a kitchen EVER again.

Slab doors were the doors for me! 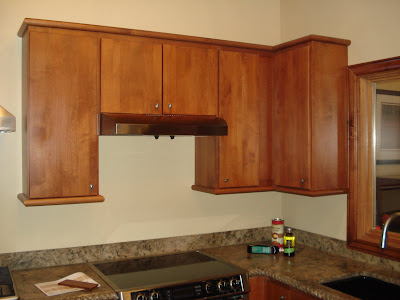 Yet...even knowing the truth of all those statements above, I would stand and look at slab doors and feel like I was signing up for a "Plain Jane" kitchen.
Oh I have had beautiful mahogany slab doors before and loved them for their simplicity.
And in my head I really wanted to simplify my life...but my heart kept yearning for something different. 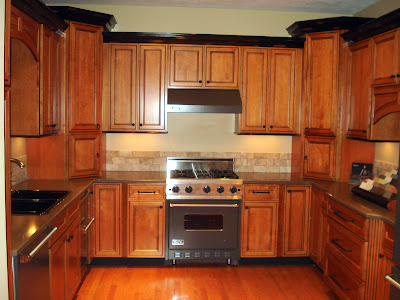 Early in the kitchen cabinet style hunt I had several times admired a finish called Whiskey Black.
Each time I had told myself that since it was a finish only available on certain doors with extra detailing, I shouldn't chose it, since I was determined to keep the kitchen cleaning time at a minimum.
Well...the other day we were sent to a show room by our contractor to select some items for the renovation, and B. saw this model kitchen pictured above and... 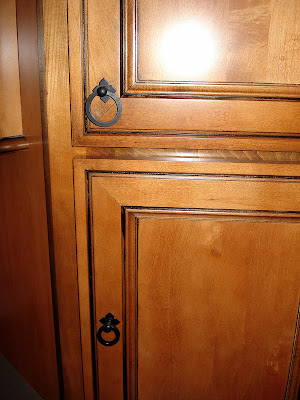 Interestingly, the style and finish is very similar to our 32 year old bedroom set, which B. also selected just before we got married, and which I have always loved.

And yes, I have had to carefully dust those little inset details on the bedroom set about every other month or so too. 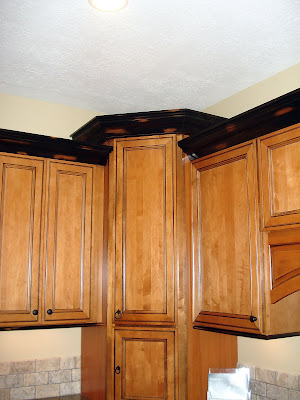 The show room had created a custom crown moulding that looked spotty and rather heavy.
We will pass on that feature, but may have a dark smaller crown and toe board created instead. 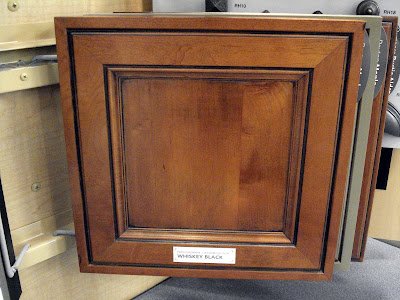 The cabinet style is by Diamond, the style is called LaGrange, created out of maple, and the finish is a glaze called Whiskey black.

Our oak floors will be close to the same color, but with more grain, which will create more high and low lights.

I don't know whether I will eventually regret not listened to my head, which insisted on either plank or simple frame doors.

All I know is that both my heart and B.'s heart just loved this fussier style.

(It did help in my head that B. has agreed to help with the cleaning...and that while I know the drips and smudges will still happen, at least they will not show so much on wood!)

Posted by Thoughts on Life and Millinery. at 8:24 AM 11 comments: 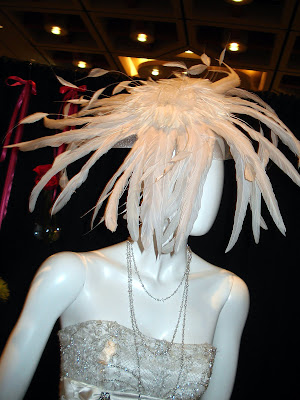 I know it must seem like I have forgotten about the part of "my world" that includes research, reaction and millinery.

Let me just say, no, I still very much love millinery, but a lot of other things have been going on lately. 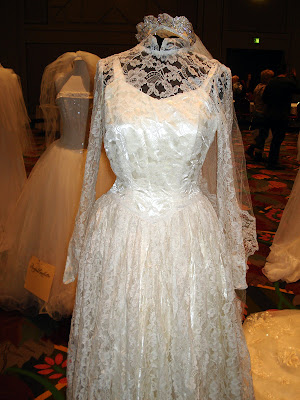 Witness: A vintage 1955 bridal gown, part of a historical gown display shown at the Salt Palace Convention center two blocks from our apartment. 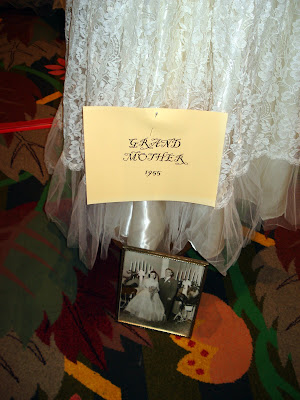 Isn't it fun to see the "back then" style, including a picture of the 1955 bride herself? 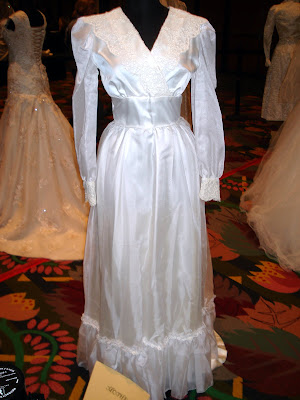 A 1978 wedding gown...ah yes, the flounce at the bottom, full sleeves.
Yup, I'd recognize a bridal gown of that era anywhere. 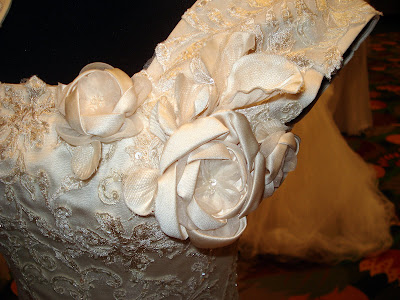 Then there was a gown from just a few years ago. I looked closely at the hand sew flowers tucked on one shoulder and on the hip of the gown. 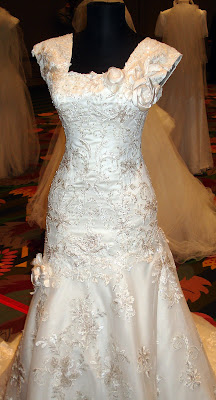 What fun to see the three eras represented.

Isn't it interesting to see how bridal fashions have changed over the years?
I wonder what bridal fashions will look like in the future?
Wonder what a Bride who is getting married, say, in late April of 2009 will chose to wear?
Maybe I should do a little research to see what I can find out.
I'll start by asking a future bride about what she plans to wear. 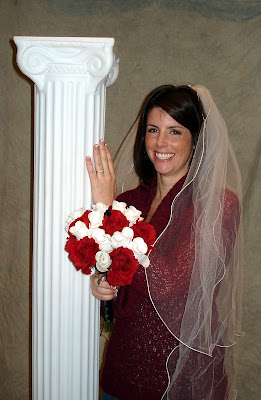 Maybe it is too soon to really know the answer to that question. 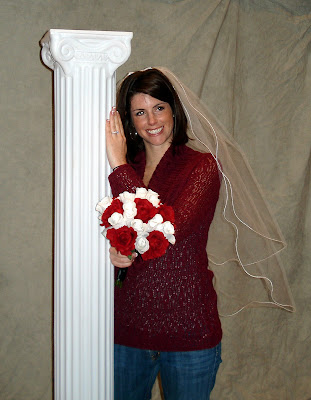 Less than 24 hours after becoming engaged on January 9th 2009 really is a tad soon to be sure of exactly what kind of dress one will be wearing on one's wedding day four months from now in April. 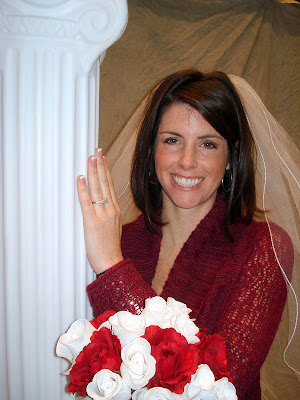 I'm not sure about what kind of dress she will be wearing, but I do know this:
This particular soon to be bride is about to become my daughter-in-law! 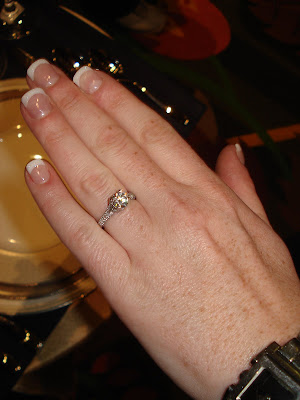 Rachel and Jeff...
Seven months ago they met at church.
They fell in love...they prayed...they considered....
they agreed that they want become one in the sight of man and God.
It will be a church wedding in her home town of Santa Rosa California. 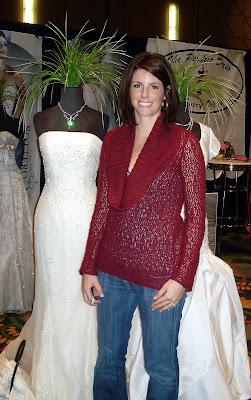 We'll have to wait till then to see what kind of dress this 2009 era bride will be wearing. 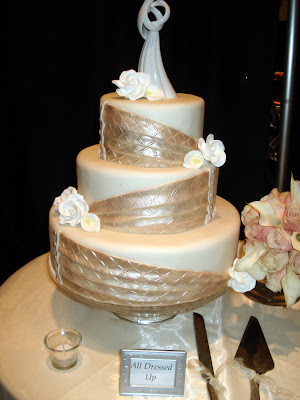 As well as what kind of cake will be served, and flowers, and invitations and music...things that seem to change with each passing era.

At least the most important part of the bridal wear has already been donned.

The most important part.

The one thing that makes bridal gowns of any era so delightful:

The distinctively radiant smile of joy.

Congratulation Jeff on choosing a lovely bride to be.
Rachel: thank you for agreeing to marry our son!
Mazeltov!
God blessing on you both and all your upcoming wedding plans!
Posted by Thoughts on Life and Millinery. at 7:08 PM 18 comments: