When I am old I shall wear leather....

When I grow old (say age 97...) I shall wear leather, dye my hair pink, go to biker bars and shake my bootie while holding on to my walker.

Here's a story about one group of 90+ year old women who did all that!

Oh yeah...I think I already know a few women who would be happy to sign up for such an outing when the time comes.

And I'm thinking about reserving a space at a Bethesda nursing home for some time in the future.

Heck, with this kind of fun, I'd be happy to move in today!

Nursing Home Residents Form a Biker Gang
“I want to be the first one on the bike,” said 90-year-old Scheltes. 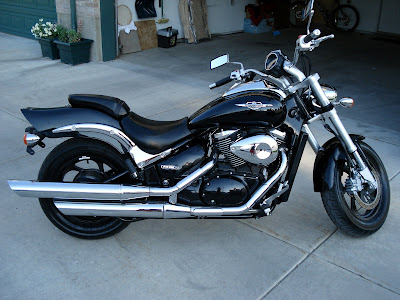 Lydia Scheltes woke up in her bed at Bethesda Retirement Center one morning with pinkish hair, a tattoo on her arm and a hangover. Not a typical morning for the 90-year-old.

“Seniors are more fun than you’ll ever know,” she said.

Scheltes wasn’t alone: Seven ladies and one dude – aged 65 to 97 – all had a similar hazy look in their eyes after they hung out with bikers at the Evil Olive bar in Wicker Park on Feb. 11.

Some of them were still wearing their own biker gear.

Bethesda’s residents usually spend their time knitting or quilting or doing an activity typical of their age group, but they wanted something different for a change. They often drive past the Evil Olive during day trips and fantasized about what goes on inside.

One day Elizabeth Barrett, 68, asked their Life Enrichment Director, Ruth Werstler, if they could check it out.

“I did a little digging and found out it was a nightclub,” Werstler said. “But that didn’t deter them.They still wanted to go.”

In fact, Barrett upped the ante: She suggest going out as bikers.

“It was all my idea,” Barrett says with a devious laugh. “We aren’t the regular type of nursing home.”

Werstler indulged her crew and reached out to various people who could help transform the retirement home crew into a boss biker gang. She recruited hairstylists, make-up artists, a professional costumer and a tattoo artist from Artreach at Lillstreet to donate their time to make the ladies look fearsome.

About 100 people showed up to the club, including members of the Latino American Motorcycle Association and Chicago’s Chapter of A.B.A.T.E.

“These women were serious, man,” said Evil Olive General Manager Eric Bollard. “They showed up with pink hair and skull caps. It was for real. One woman walked straight up to the bar and ordered a Dirty Martini. It was great.”

They even turned the event into a semi-fundraiser. Werstler is trying to raise $25,000 for a touch screen computer system for the non-profit retirement home so that the women can learn and use the Internet. The bikers who showed up pitched in about $250 toward the “Never-Too-Late.”

But it wasn’t the money that tickled the residents. It was the exhilaration of an evening that felt like it “flew by in a nanosecond,” said 66-year-old Janet Kaplan.

Kaplan, who is wheelchair bound and admittedly extremely overweight, was disappointed when she first arrived at the club because there were stairs by the entrance.

“I said, We’re not going to make it,” Kaplan said. “Then before I knew it a group of bikers came and grabbed my wheelchair. All I saw was my head being tipped back and my feet were up in the air and they had me in the club.”

The bikers gave the women club hats, and spent time chatting them up, flirting and even dancing.

“One of our residents, Katie, just turned 97, and she got up with her walker and shook her booty," Kaplan said. "She shook it good."

The one thing the women didn’t get a chance to do was ride on a motorcycle, because it was too cold.

LAMA and A.B.A.T.E. members made plans to come by the residence center in the spring and take the ladies for a ride.

“I want to be the first one on the bike,” said 90-year-old Scheltes.

They may ride straight back to Evil Olive.

“Man, those ladies were an awesome bunch," Boland said. "Everyone was so into it that we’re thinking about arranging another party for them soon."

Find this article at:
http://www.nbcchicago.com/news/local-beat/Nursing-Home-Residents-Form-a-Biker-Gang-84805857.html
Posted by Thoughts on Life and Millinery. at 3:44 PM

Too funny! It's never too late to have fun.

When I saw the title...I was a expecting a tribute to your friend, Lovella.

Judy used exactly the same thoughts that I had...I'm always having fun at my age....
It's the attitude that we accept as we move into different seasons of life.

When I am old, I shall be eccentric! ~L

what a hoot! gotta love those bikers!

what a hoot! gotta love those bikers!

Well, I must show this to my husband and his friends. They will find it quite amusing in light of the fact that they all ride motorcycle. The wives often ride with them. I just love this story, although I am sure I will not be riding motorcycle in my 90s. I appreciate the biker's response to these brave and a bit crazy group of ladies.

I think I will bring this idea up to my long time prayer group of 80 year olds. We have some live wires in there and you know who they are Jill. We would probably embarrass your Dad who rides a motorcycle, so I will let that idea go...or maybe not! Mom

That's too funny! I was just imagining my 88 year old MIL and my 76 year old mother joining these ladies! I have had a good healthy belly laugh this morning...thanks!

When I am old(er), I, too, want to be right there where the action is!

Ha - those old chicks showed them! It sounds like quite the unlikely but fascinating get-together.

I don't know if I'll ever be able to wear leather - too hot!

:)
Reminds me of my mother.